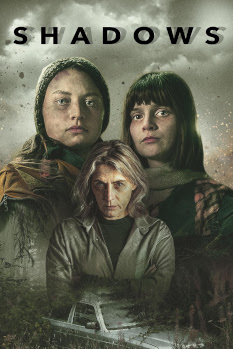 This is a movie that I got the chance to see thanks to Justin Cook as he sent over the screener. I knew that this was a thriller. It intrigued me since I knew that this was from Italy and for November, I celebrate Italian horror month. Other than that, I came into this one blind.

Synopsis: Alma (Mia Threapleton) and Alex (Lola Petticrew), two adolescent sisters, are survivors of a catastrophic event. They live deep in the woods with their mother, a strict, over-protective woman who has sheltered them from ominous presences, the Shadows, which live in the daylight and infest the world beyond the river. When they follow mother out for hunting, these two discover the truth about the Shadows and their own reality.

Now that does well in giving you an idea of what this movie is about. The only things that I’ll go deeper is that they live in an abandoned hotel. This looks to be filmed during the pandemic since we have a cast of just these three. There is Alma, Lola and mother, who is played by Saskia Reeves. The sisters are left to tend to different things in the place they’re staying to survive. This can be from collecting water and tending to some plants that are inside.

Mother is strict with these two as well. We see an incident where the girls go into a room to find a slingshot and discover an adult magazine. They take it back to their room, which their mother discovers. She locks them into their room, without food and she disappears or that’s at least what her daughters believe. She does love them though. She takes them out hunting, but when they go off on their own, this scares her into a rage.

Things aren’t as they seem though and mother might not be as forthcoming about the state of the world. Their relationship isn’t necessarily what it is either. This is a coming-of-age story as well as a search for truth.

Now that is where I’m going to leave my recap without going into spoilers. When I saw that this featured a small cast, I knew that the acting would have to carry this. I’d say for the most part that is what we are getting. The story is limited. What we know is that the world seems to have ended and mother is trying to prep her daughters to help her with providing for survival. Things aren’t as they seem though. Mother is hiding things from her girls.

There is one other thing with the story that I want to go into. There is one reveal that I guessed as it is taken from a few other movies that I’ve seen. I won’t say the titles since that will give things away here. I don’t know if this does it as effective. There seemed to be a couple of times where what the reveal is then becomes a cheat. What I will say though is that there’s another reveal here that I didn’t see coming. That did make things a bit more interesting with the implications of things we’ve seen play out throughout here. There is a bit of psychology being explored, especially with Alma and mother.

That should be enough there so I want to go over to what I’ve been alluding to for a bit here which is the acting. Threapleton is good. What is interesting is that she is Kate Winslet’s daughter. She does well in showing emotions. There is a stretch where she must perform on her own and she carried it. Petticrew is solid in support of her. She seems like a bit of a know it all were Alma struggles with confidence. I liked these two playing off each other. It is more interesting with the truth at the end. Reeves is also solid as the mother. She comes off villainous, but I do think she has the best intensions for her daughters. There isn’t a bad performance.

The only other things to go into would be with the filmmaking. I think that the cinematography is good. This is shot well and I like the use of this abandoned hotel as the setting. It also feels like this trio is all alone where they’re living. There aren’t much in the way of effects, but we don’t them. This isn’t that type of movie. What I did have an issue with was the pacing. This is too long. It meanders and I lost interest. I think this needs to be trimmed up. Other than that, I’d say the soundtrack was fine for what was needed. It didn’t necessarily stand out or hurt this.

In conclusion, this is a well made enough movie. This has a small cast with our trio. They all do well in bringing their characters to life. I’d say that the cinematography is well done. My only issue that I did have was that this is too long. It needed to be trimmed down. There is a limited story with a couple of reveals that we’ve seen before. This doesn’t do as well with them. I did need to stay that. This is still a decent enough thriller in my opinion.