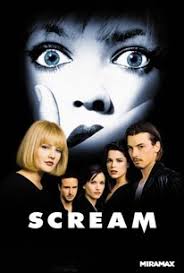 I remember when I first saw this film. I was still needing a babysitter and my mother rented this on VHS. I watched it and I was hooked. I’ve been a horror fan for as long sa I can remember, but I hadn’t gone into the slasher genre yet. This started me down the path that I am on now. The official synopsis for this film is a year after the murder of her mother, a teenage girl is terrorized by a new killer, who targets the girl and her friends by using horror films as part of a deadly game.

I have to say that this film was one that broke the mold. It took what happened in past horror films and poked fun at it. It also explained the rules and things that were done in them without the classics even realizing it. This one is great in that it has so many references to those same classic horror films.

To expand on this notion above, it not only references them, but it makes you aware that despite what the characters say, they end up doing what they said they wouldn’t. An example is Sidney Prescott (Neve Campbell) says that the big breasted, blonde girl should run out the front door and not up the stairs. The killer then comes after her and she does exactly what she said not to, because her front door is locked. This meta-approach breathed life back into horror, even though it is something that now is a little bit overplayed.

Something that I want to caveat here is that not everything that is established is correct. During one of the more iconic scenes where Randy (Jamie Kennedy) is stating the rules, he isn’t fully correct. He claims the final girl cannot drink or do drugs, cannot have sex and to never say that ‘you’ll be right back’. Of course, just off the top of my head, Laurie from Halloween smokes weed and I’m sure there are other cases as well. This plays into the story of the movie so I understand why this is used.

What I will say though is that the first time you watch this, I think the mystery is great. It had me guessing until the end. What also makes this film great is that it is good enough to be re-watched and it is fun to try to see how the killer did all these things after you know who it is. Not many films have the same type of rewatchability, but that is something that makes this one great. Even after seeing this movie as much as I have, I like to look for different things.

I did want to say that Randy is a personal favorite in this film as he is me in my friend’s group. I’m not as nerdy as he is, but I’m the one who loves horror. I love that his knowledge of horror actually has him point out who the killer is and he gives a motive for everyone. The reveal at the end also has something to do with the genre and I like what they did there. It pokes fun at the idea that was presented in courts around this time. The logic used here is interesting for sure.

That isn’t to say there are some issues with logic or some liberties taken. We get some things that are a bit too convenient. An example here is a bathroom scene with Sydney. There would need to be a lot of things that line up for it to work the way that it did. That’s not to say this is ruined by it, but with how many times I’ve seen this movie, I’m able to nitpick some things as well.

Moving away from the story, I’ll go next to the pacing which I think is great. The film runs close to two hours, but it doesn’t feel like it. You are sucked in with the characters and the mystery of the film, even after you know who the killer is. There is enough action, deaths and building of the story that it moves along at a great pace. Director Wes Craven nails it here for sure. Even the comedy in the film doesn’t hurt it but adds to the film. It all culminates in an excellent ending.

The acting is something I touched on, but I must commend the actors. We have a bunch of people who are relatively unknown aside from their television work at the time. Drew Barrymore was a star and she is gives the film the Alfred Hitchcock Psycho cold open. Campbell is great as the heroine. She is broken by what happened to her mother, but it also makes her strong. Skeet Ulrich as Billy Loomis is great. He seems like a good guy, but he has the creepy undertone from the beginning. Courteney Cox as Gale Weathers the sleazy tabloid reporter who as a history with Sidney is good as well. Rose McGowan, David Arquette, Matthew Lillard and Kennedy are all great for their distinct characters as well. There is nothing negative I can say about the acting.

Next should be the effects and cinematography which are great as well. This was at the height of early CGI that doesn’t seem to hold up. This film goes away from that by going practical. Since they took a more realistic approach, it looks good. The stabbings and cuts in the film seem like they are real. Even though Tatum’s (McGowan) death wouldn’t work, it still looks good. I have nothing negative to say here. The movie is shot every well which helps for sure.

This film’s score is also good. It has such a 90’s feel to it, but it doesn’t hurt anything. All the song choices are perfect. I did find it funny that decided to go early in the film with a cover of ‘Don’t Fear the Reaper’. It is acoustic and for the scene, it works. This is something I noticed within my last two viewings. There are some iconic songs that when I see the scene, I know exactly what the song is.

Now with that said, this film is iconic. The 1990’s are a rough era for horror fans as the quality took a dip, but I don’t necessarily think that is the case. There are some iconic films from the era. This is one of them. This film helped breathe some life back in the genre. There is a great story here that even after you know the reveal, it is fun to go back to watch it to see how it could play out. It is coupled with great acting and the pacing as well. The effects and the soundtrack are also good. It help start up the meta look at horror that is still popular today. If you haven’t seen this film, I recommend checking it out, as I think it is great and worth a viewing. It is even worth a rewatch if you haven’t seen it in awhile.