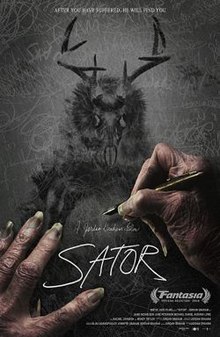 This was a movie that I got turned on to thanks to podcasters. I saw this on a list of films that were getting released in 2021. There are some people's who opinions I respect talking highly of this, including my friend Tim from Facebook and Duncan from The Podcast Under the Stairs. I actually got to hear an interview with the writer/director Jordan Graham on a couple of different shows, which intrigued me even more. To get into this, the synopsis here is secluded in a desolate forest; a broken family is observed by Sator, a supernatural entity who is attempting to claim them.

We start this movie off with an interesting scene. Someone is pouring a liquid on a person lying down. They are then set on fire. It then shifts over to the character we're following for most of this, Adam (Gabriel Nicholson). He's living in a cabin in the woods. He goes out shooting beer bottles with a rifle and seems to be hunting something along with his dog. There is a call he is using while also checking a trail camera. There doesn't seem to be anything on the images it is taking though.

The movie then introduces us to his family. He has a brother of Pete (Michael Daniel) along with his sister Deborah (Aurora Lowe). They visit quite a bit with their grandmother, Nani (June Peterson). What is interesting here is that she is playing herself. She is the real life grandmother to Graham and the basis of this story is from her automatic writings she did and encounters she had with an entity that spoke to her named Sator.

As the synopsis states, this family is broken. Adam seems to have lost his wife. I didn't pick up if she left him or she passed away, but he's distraught. Adam has isolated himself after whatever happened to her. Pete is struggling himself and Deborah is doing all she can to keep the family together. This family knows tragedy as their grandfather, Jim, passed away along with their mother.

When they're visiting with Nani and she is telling them stories, Adam is told by his brother that he thinks the error with taking pictures with the trail cam is with the memory card. He swaps it out with another one and it takes an eerie image of the trees and darkness. This is an image that is haunting Adam's dreams along with other things. He thinks he finally got Sator's attention as well when he is visited by a creepy entity. The question is, did he really meet Sator or is this all in his head? Does Nani also really communicate with this being as well?

That is where I'm going to leave my recap. This movie doesn't have the most complex story, but it also doesn't need it. What this movie does have though is atmosphere. Going back to the synopsis, we have this family that all of them live outside of town. I can understand this as I grew up for the second half of my childhood in the country. Not this far out, because here Adam is legit living in a cabin in the woods. The rest of the family isn't that much better. There aren't a lot of people around, it is dark at night and I mean really dark. Not living in the city dark. This really helped to make it even creepier when things happen or characters go into the woods to investigate.

What makes it even scarier for me is that Graham based all of this off what his real life grandmother of Peterson stated. She claimed that after a séance in the late 1960s, she was visited by an entity called Sator. It would speak to her and she had journals and journals of auto-writing from this. She stated that he would speak directly into her mind. I do believe from an interview that he confirmed she ended up being diagnosed with schizophrenia. Graham also said other family members had a similar mental illness and that they also confirmed speaking with Sator. There are actual interviews with Nani here recounting what she believed to be real. There are also real recordings of her and her actual journals are used. This gives it a good touch that he decided to make this movie based off something she really thought was happening to her and actually uses really documentation from her does as well. I'm thinking this is more mental illness, but for a movie it adds a creepiness factor.

Where I want to take this next would be the two options to explain what is going on here. The first would be that there is really a supernatural entity in these woods. I actually think for this movie is really what we getting here. It was quite creepy to see these figures in animal furs, wearing the skull of a deer. They don't speak. They really just stand there and stare. It was definitely effective for me. Once Adam looks more into the picture that he took with the trail cam, it really starts to ramp up as well. Where it goes in the third act was effective.

The other explanation would be that it is mental illness. Adam is dealing with some heavy things and he's isolated himself in the woods. It really seems that whenever he sees something, he's alone. He has been listening to the stories from Nani and knows what happened with his mother. He so desperately wants Sator to be real so he is descending into madness. I can see someone giving a reading of this movie to be in line with this theory.

I would say that is the extent of story that I want to delve into would be more with the atmosphere. The first aspect here would be the cinematography. I thought that Graham shot the heck out of this movie. The isolation of the woods is something that you can feel. It looks beautiful. There is also some surreal sequences and shots. There is ones where everything is black and there is just a fire burning or seeing Adam in white. This really helps to make it seem like we aren't sure what is real and what isn't. There is also some good editing here. I like that there was black and white footage shot, then real home movies that add another level of realism.

The other aspect here would be the sound design and soundtrack. This is something else that Graham did. He utilizes whispers that make the shots that aren't scary feel that way. He actually made all the music and not all of it is with instruments. I found this to be pretty interesting as well for how it fits with the vibe this movie really needs to have. I was really impressed to be honest.

Then next I think I'll shift this over to the acting. Nicholson has an interesting performance. He really doesn't talk much. He does look intense with his facial expressions and there is real fear on his face as well. Daniel is solid as Pete. He really interacts with Nani which is nice to see, even though he's not related to her in real life. Rachel Johnson adds another creepy level as Evie. Lowe is solid as the sister and Taylor in her limited role as the mother. Then finally we have Peterson. She is really just playing herself which almost has a documentary feel to it. I did enjoy that. The last thing here would be those that play the entities in the woods. Their look and how they don't really say anything is creepy.

The last thing that I want to go into would be the effects. There aren't a lot of them and I'm assuming part of this is due to budget. This is a movie though that I believe Graham knew the limitations so he didn't need a lot of effects. What we do get was done well. There are some tricks with camera angles and cinematography which really help here as well. What we get is well done regardless.

So then in conclusion here, this is a movie that I'm glad that I saw. It doesn't have the most complex story, but it also doesn't need it. What is really interesting is that it is based on the real writings and beliefs of Graham's grandmother. Incorporating some of the real material really adds a layer here. The acting is good in helping bring this to life. What effects we get here are as well. The atmosphere is really a strong part with the cinematography, location and sound design along with the music selections. If I did have an issue, I do think the story could be tightened up just a bit. Regardless, I like the concepts we are exploring and this is one that I'll rewatch before the end of the year to see if I might have missed something as well as see how this holds up after a second watch.