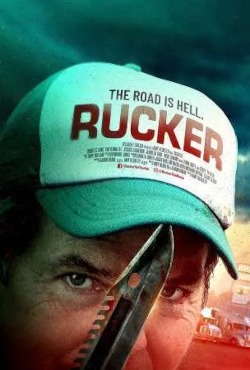 This is another movie that I sought out when looking for 2022 releases during January. This would have been around the second week of January where there has been limited time and I’m trying to keep on my pace for movies released during the year. This movie sounded interesting from the brief synopsis I was looking at and trying to confirm it was horror. Other than that, I came into his one blind. For the synopsis that I found, a trucker tries to reconnect with his family by killing women who remind him of his ex-wife.

Now for this movie, we are following Leif Rucker (Bobby C. King). He drives truck as he puts it. With him is Maggie Goodnow (Cheyenna Lee). I found this to be interesting, as he is talking to her, but this is set up like a faux documentary. Rucker as he goes by, is telling all of this to Maggie, while he is talking to the camera. I found this to be interesting, especially for how much knowledge is put into here into the world of truck driving. We also get to meet some other truck drivers he is friends with like Taco Tuesday (Corey Taylor), Corndog (Sean Pickering) and King Mojo (Zivin King).

We get to know Rucker better and we know that he was married to Darlene (Vicki Bluedot). She used to come on the road with him, but that stopped. Rucker is still in love with her. As things go on, we learn that they are no longer together, but Rucker is clinging to getting her back. Not everything that he is saying is true though. There is a darker side to our lead and Maggie is exploring to get to that.

As the synopsis states, Rucker is a serial killer. He is killing different women at different stops that have parts of Darlene in them. When Maggie tries to delve deeper into this, we learn that she also has a darkness within her. She reveals that she once did a mercy killing on someone who was dying of cancer. The longer these two are together, there are secrets that are revealed and the deeper they go into them, these two are more connected than Rucker originally knows.

That is where I’m going to leave my recap for the movie. There isn’t a lot to the story as this is more of a character study. Originally, I just thought it would be fleshing out the character of Rucker. The more we get into it though, the more we also learn about Maggie. This makes for some interesting information. Before moving away from this, I will say that we have some intriguing reveals and the story that is built sucked me in. It does come with some flaws though as it is plays out as well.

I think where I should start digging deeper is with the character of Rucker. He is of course, a truck driver. I like that this movie has him as a serial killer. This is something that is based in fact and I could see him killing for as long as he has. He does drive in the same area for most of his runs, but he still a transient. I like how he disposes of the bodies as well. It is something that I’ve seen in another movie. When Maggie asks about this, he tells her that he saw someone else do it. That was eerie as I know there are multiple serial killers who have worked like this. They are hard to track down and convict. The reason that he is killing also worked for me. He is delusional and descending into madness, so I could buy what he is doing here. I will also give credit to King. I thought his portrayal of the character was good. There is an awkwardness to him that felt real. He isn’t great, but he worked for the role.

Then going along with this, I want to look at his co-star of Maggie. In the beginning, we think that she is passive in all this. The more we learn, the more that we see she is connected in a deeper way. I didn’t like the ultimate reveal for her. It would have played better for me if the psychosis for the two was what brought them together and connected them. Regardless of how I feel there, I think that Lee was good in her portrayal of Maggie. This movie gave off a vibe of something like Man Bites Dog, where our crew slowly becomes part of the subject. I can work with it for sure.

Where I want to go next would be this movie being a faux documentary. For a good part of the first act, we are getting found footage as Maggie is videoing Rucker. Around about the start of the second act it shifts to being filmed like a normal movie. This caught me off guard. It doesn’t ruin the movie. It feels like they wanted to go one way and when they realized it wouldn’t work, so they shifted. I was able to settle in after that. There was some of the realism we had here that is lost though. I do think that the cinematography is well done though. I still want to give credit there.

Going along with this idea, I’ll shift over then to the effects. I thought that for the most part they were well done. We get some throat slits here that looked great. There is quite a bit of blood which was good. I will admit, there was a bit of CGI with some of the spray that I noticed. It does hurt it a bit. We also get these interesting cartoons that are interspersed. They are showing, instead of telling what letters to Rucker are conveying. I don’t mind the idea here, especially since as the writer of the letter gets older, the animation becomes sharper. There was good care there. The problem that I had was that I don’t love it being done with animation. I understand the use of it though, so I can’t hold it against the movie too much.

Then I think the last thing to go into would be the acting. I’ve already said that I like King and Lee. I liked that we got to know some other truckers, as they felt real enough. I will give credit to Taylor, Pickering and Zivin King. I thought that those that are victims were fine as well with Leona Britt, Jessica Cameron, Jennifer True, Kate Giuggio and Deb Campbell to name a few. Overall, I would say the acting was fine. There were times where emotions weren’t coming through when it was needed, but I’ve seen much worse.

So then in conclusion here, I didn’t have the highest expectations coming in. This movie surprised me with some of the things that we got. I thought the concept behind the movie was good. Taking something real like a truck driver who is a serial killer is interesting. Doing a faux documentary to get to know them also worked for me. I even think that King as Rucker was good and Lee as Maggie was fine. Most of the effects worked and I thought that how this was shot was solid. My issue then comes from a shift in the filming style and the idea of using animation. Neither ruin the movie, it just didn’t work for me. For the most part as well, the acting was fine and despite some issues with CGI, the movie was intriguing. Since I wasn’t there for the reveals later in the movie, it did end up dragging on too long for me. I would have to rate this as just over average for me. If this sounds interesting, I’d give this a go as you could do much worse in my opinion. I’d wait for this to come to a free service as I did have to rent this one though.