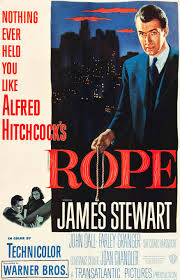 Originally I watched this film as I was seeking out all of Alfred Hitchock’s films. The first time was a few years ago and my local theater was showing it on a 35mm print this time around. The official synopsis is two young men strangle their ‘inferior’ classmate, hide his boy in their apartment and invite his friends and family to a dinner party as a means to challenge the ‘perfection’ of their crime.

I have to say that this is another great film from the master of suspense, Hitchcock. Before my initial viewing, I wasn’t too sure about the story. As I viewed the film, I realized that this is the film that was famous for its use of long takes. I really liked to see how he did this. Its supposed to take place over 120 minutes, which is the run time. I like what he does with natural wipes and how he could get away with making the film look like it is one continuous shot. It is very clever. The pacing is great and it really built tension. I could feel it and it kept me engrossed.

The story of the film is quite interesting as well. Brandon (John Dall) and Phillip (Farley Granger) murder David Kentley (Dick Hogan). Hitchcock is a master in that he shows us David asking his girlfriend, Janet (Joan Chandler) to marry him. She wants to wait until he is done with school, which is coming in less than a month. In a 3 minute scene, he makes us like David because in the next one we see him getting murdered.

From here, the film is showing us the plan that these two men are trying to do. They invited Janet, as well as her ex-boyfriend and David’s former best friend Kenneth (Dogulas Dick), David’s father Mr. Kentley (Cedric Hardwicke) and their former teacher Rupert Cadell (James Stewart). David’s mother is under the weather so his father brings his sister-in-law Mrs. Atwater (Constance Collier). They want to show off and host this party with the dead body right there. Brandon loves it and Phillip starts to lose it, especially when Rupert pushes them.

There’s an interesting concept in this film. Brandon is basing why he did what he did off of something that Rupert believes. He thinks that there should be a select few of ‘elites’ that should be able to murder. It is almost like the basis of The Purge. I do find Rupert odd that he claims to not be joking about this, but he also isn’t on board.

I have to say that I thought Dall and Granger were great. Granger’s role is not easy and I think he pulled it off. Seeing him coming apart the longer the party goes on is interesting. His drinking isn’t helping him keep it together. I also thought that Stewart was amazing. I found it interesting that he doesn’t appear until 28 minutes into the film, but he does really steal the show. He doesn’t ruin it though, because he is a great actor. The rest of the supporting cast was great as well.

I am big on story and I do have to say that this one is lacking. This film though is character and concept driven, so the story not being overly complex is not needed. As stated, even though Stewart ends up stealing this film after he appears, I still feel he is under utilized by how long it takes for him to show up. Those are really my only issues.

There wasn’t really in the way of effects in this film and it didn’t need them. There was a part where Phillip cuts his hand and then it disappears. That was an issue I had. I’m also not entirely sure what happened to Rupert’s hand either. If it was shot, it would be much worse. If it was another injury it is fine. The film doesn’t really have much in the way of  a soundtrack either. We do get Phillip playing the piano and a record put on a one point. It does add to the realism.

With that said, I would recommend seeing this film. Hitchcock is at his finest with this. The tension builds well, especially with the party going on, the alcohol following and the concern for Hogan not arriving growing. Dall adds to this with things he says and does, with his plans backfiring. Granger folds under the pressure and Stewart helps to build it. This is a good indicator of why Hitchcock is the master of the suspense. The pacing is great and the story, though not complex is effective. I would say to give this film at least a viewing.