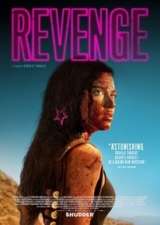 When this movie first came out was when I started getting into doing year end lists of horror movies. I caught the trailer for this at the Gateway Film Center and decided to give it a go there. It had me intrigued and I was excited to check it out. I’ve also now given it a second viewing as part of the Summer Series for the Podcast Under the Stairs. The synopsis for this film is to never take your mistress on an annual guys’ getaway, especially one devoted to hunting - a violent lesson for three wealthy married men.

This film has a basic story like the synopsis said. Richard (Kevin Janssens) takes Jen (Matilda Anna Ingrid Lutz) to a house in the desert. We learn that he is married when he talks to his wife on the phone while she is planning a party for one of their children. He gives Jen the usual line that he wished he didn’t have kids or he’d leave his wife for her. Jen is idealistic and thinking that she will have Richard all to herself one day.

Things take quite the turn when the other two friends show up, Stan (Vincent Colombe) and Dimitri (Guillaume Bouchède). She is prancing around in her underwear, thinking they are alone. They are staring hard at her. It is interesting that they also show up with guns. The four of them then do have a great time, drinking and doing drugs. Jen even uses Stan to make Richard jealous. Being a rich and powerful man, Stan takes it too far.

This causes Jen to want to go home, but Richard strikes her as punishment when she is unruly. She tries to flee across the desert and the men chase after her. This film takes an even violent and bloody turn as Jen decides to fight back and get her revenge.

There isn’t much more that I need to do for a recap. Where I will start is that I like this movie doesn’t play up the attack on Jen too much. I’ve seen a good number of rape/revenge films in my day. Showing the attack has its merits, but not for everyone. I thought this was strong enough to convey it by the sounds we are hearing from outside of the room. What Dimitri does to ignore it adds to it as well. It is quite heartbreaking to be honest. Jaime was watching the beginning with me and I warned her what was to come. She wasn’t planning on watching the whole thing. I bring this up as a warning.

From there, seeing Jenn as she tries to pull herself together and what she does back to the men is satisfying. Something I want to add here and I noticed with this second viewing. Nothing is easy for Jenn. How she is talking in the beginning and the compliments that are being paid to her, it makes it seem like with how beautiful she is and how nice her body is, things just happen. We see as she fights back, that her plans don’t work out how she is expecting. It adds a sense of realism there. It is low-key great for me. This helps with tension by making it a cat and mouse game as well.

A film like this needed to have a great cast, which I think it does. Lutz was amazing in her portrayal of Jen. I thought she killed it, literally and figuratively. She starts out as a timid, gorgeous girl that when she is pushed to her limits with what happens to her, she gets her revenge. I thought that they made it realistic though as I was saying. I thought the three men were great as they are all distinct characters. Janssens is their leader and he is one most wanting to silence her. He’s also the biggest jerk. It feels like he isn’t used to be told no. Colombe wants to stop what they are doing before it is too late. He is like Richard and starts the crux of their problems. Bouchède isn’t overly developed and is quiet, but I like that he goes along with whatever plan is happening. He is still complacent. That is about it for the cast outside of some people in a television commercial and briefly meeting our helicopter pilot.

To go with the acting is the effects of the film. They are so realistic they had me cringing a lot of the time. I can’t do the sight of blood in real life and it looked good in this film. The injuries also look extremely realistic as well. It not only truly blew me away, but it is also helping the film. The one that really got me is what happens to Jen when she falls as well as what happens to Stan when he steps on a piece of glass. Both still make me cringe to think about. There is a lot of blood in the film. It did make me question if she could be alive for how much blood we see at times. I can be forgiving of it and say that it is possible. There is also an issue with a burn that we get. It doesn’t ruin the movie for me, so I don’t mind it.

The sound design of the film was also good. The music earlier in the film is being played while they party and it is fitting. It also transitions for us to hear, but we realize that it is from her iPod as well. Some of the music earlier on is ambient. We also get music in the film that helps to build the tension for the scenes as well. Some of it comes when a character is stalked by another, but then we get more of a grand one while the characters are trying to kill each other as well. It fit the film and I’d say adds another layer to what we’re getting. Not a soundtrack I’d listen to on my own but works for what was needed.

Now with that said, I wouldn’t recommend this film to everyone. I’m not saying this film bad by any stretch, but it is a bloody revenge film. If you can handle it, I would give it a viewing. This film is also interesting that it is based on rape but downplays it in an effective way. The story is basic, yet there’s enough to explain the actions taken. The acting is solid and the effects are what sell the film. I was also impressed with sound design and soundtrack of the film which I thought were good as well. The setting of the film helps to build tension as it is accessible only by helicopter or a long drive. There is desolate feeling that comes with it. I would recommend giving this a viewing if you can stomach the blood and effects. It is better one of the better films I’ve seen this year for sure.