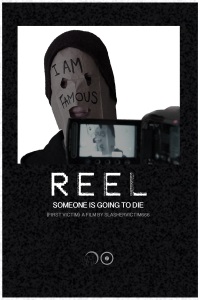 Now this was a movie that the writer/director reached out to me on social media about seeing this film as well as the sequel to it. I will say that I’m a fan of found-footage, so I was intrigued to see what this would be all about. It is even more interesting as someone who reviews horror movies, to see what the premise of this one is. To get into this, the synopsis is one of the sickest bloodbaths in horror movie history occurs after a deranged stalker becomes obsessed with real life horror film critic Todd Smith (Mikes Estes).

For this movie, we really have two different storylines that are going on and they converge. To start off us, we learn that this footage is forwarded from the killer SlasherVictim666. We never get to see what he looks like or hear his real voice, but this is his first film. The movie later on reveals information about his rough upbringing and his family life that leads him to do what he did.

The other storyline though follows Todd. This is interesting as I said in my opening paragraph. He has a following on YouTube where he does horror movie reviews. He is a really big fan of the found footage genre, especially the ‘lost found footage’ types. I like that the movie references films like The Driller Killer, The Last Broadcast, August Underground and The Blair Witch Project. Of course I like this as I run this blog and my podcast where I have a bit of a following as well. Much like him, it has helped give me a hobby and a ‘purpose’ outside of the normal aspects to my life. Something else here I want to give credit to is the fact that I think, even though I’ve never seen it, we get similarities to The Driller Killer.

Todd has high aspirations to make his own found footage film called ‘Cannibal Kitchen’. He unfortunately cannot find any actors to be in it, so he’s decided to play all of the roles to get it made. It doesn’t look like he has a lot of money, but I give him credit for the ambition and actually going out in doing it.

It is around here though that he realizes though that the videos that give drama get more hits. Todd is estranged from his family that lives in Bradburry, Ontario, Canada. Todd did move away with his brother Paul (Chris Brewster), but he got married to Melissa (Mandy Meyers) and moved back. Todd stages videos where he gets into it with his landlord and finally decides to prove that his sister in law is cheating on his brother and that their daughter isn’t really his. He creeps around their house looking for evidence that almost gets him caught.

What makes this all creepy is that there is someone stalking Todd. He sent him a nicer camera and he’s a fan of his YouTube page. This movie is told to us in four chapters along with a prologue and epilogue. It all culminates with SlasherVictim666 and Todd Smith meeting and the former making his first found footage horror film, with the help of his family.

There’s where I want to leave my recap, but that’s not to say there isn’t a lot to the story. We get some underlying social commentary with the brutal realism that something like this could happen. I get a vibe of The Texas Chain Saw Massacre here in that SlasherVictim666 is similar to that of Leatherface. SV666 can talk though, we just only hear his voice with a voice changer and he wears a mask. His rough upbringing caused him to be the person that he is. He is similar to Todd in that both would film a lot growing up and their families did as well.

The movie really has a commentary as well on if you put something, even a mundane life on camera, it becomes more interesting. We see that Todd is spiraling. I feel there are some deep seeded issues there that need therapy to fix, but instead he puts himself out there online. What I find interesting about this, he is doing what a majority of people do on social media. It isn’t necessarily a bad thing, but I also think that it isn’t healthy either. We’re searching for validation amongst strangers and allowing outsiders to critique our lives. It, of course, doesn’t go great, but tragedy and drama sells. When we see that is something he can do, he decides to go that route. I also got the vibe here that is the same reason that I and others watch bad reality television. It isn’t all that compelling, but just seeing someone’s life fall apart in front of our eyes make us feel better about our own existence.

I’m not going to delve into it, since I’ve referenced it before about Todd and SV666’s love for horror movies. What impresses me more is that I get the feeling that Chris Good Goodwin, the writer/director, is a massive horror film himself. There are some references here to movies that the normal fan wouldn’t know and I can respect that for sure.

If I do have any issues with the movie, I do feel we follow Todd a bit too long though. It was really I’d say over halfway through, before we really got into the crux of the story and with the movie running just under 80 minutes, it does feel a bit like filler. I don’t want to say that I ever really got bored. I was intrigued to see where this was going to go for sure. They really don’t give us a lot of SV666. The movie is a bit jarring and that comes with the found footage aspects of it. This did bother me slightly, but it does help with the effects. I also do not like that our main ‘villain’ doesn’t actually do the killings that he wants, but we see there’s more to it. I feel that diminishes this just a bit for me.

That’s where I want to take this next. The effects in the movie are really back-loaded. Once we get there though, they are really well done. It had me cringing at a few different places so I have to give credit there for sure. There are some that go a bit over the top and you can tell they were practical, so not everything is going to work. On the whole though, I was thoroughly impressed with what we got here.

The last thing to really go over would be the acting and the soundtrack. I thought all of the actors come off natural in a found footage way. I think if they stronger actors, it would have hurt the movie for me a bit. They really just feel like people we might run into on the street and I could dig that. No one stands out and they really shouldn’t, but they fit their roles. As for the soundtrack, I like that the only time we get any are scenes where things have been edited. Aside from that, it is ambient and it does sound like it is coming from the microphones that are mounted there.

Now in closing, this movie does do some things that I really like. I think the found footage aspect is solid, because it can be done relatively cheap. This movie has aspects that hit home for me for what I’m doing here and as my favorite hobby. I do think that it lingers on some things for too long and that feels like filler. The movie is also a bit back-loaded with its effects, but when they get there, they go practical and I think it looks better overall than CGI any day. There are just some slight issues I have with the movie, but overall I really dug what this movie is doing. I would say this is an above average movie in my opinion for sure.