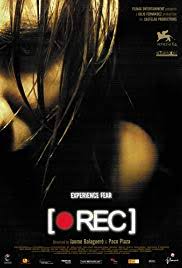 To start this off, I have to admit that I saw the American remake first, Quarantine. I was in college still and I would see most of the new horror films at the time. I really dug it and it wasn’t until a bit afterwards that I realized it was actually a remake. I’m pretty sure I saw that one once and it’s been a long time for me to finally see this one, even though I’ve heard so many good things. The synopsis here is a television reporter and cameraman follow emergency workers into a dark apartment building and is quickly locked inside with something terrifying.

We start this off with Ángela (Manuela Velasco) as she does her intro for the show he hosts called ‘While You’re Sleeping’. It showcases jobs that happen while most everyone else is asleep. She is there with her camera man Pablo (Pablo Rosso), who we never really see, but we hear his voice. For their next episode, they’re in a firehouse and going to be following two firefighters, Manu (Ferran Terraza) and Álex (David Vert). It shows a normal night until an alarm sounds. They get into a vehicle and head to an apartment building.

They learn from people in the lobby what happened when they arrive. Down there are an elderly couple of María Teresa Ortega and Manuel Bronchud, with María making the call after she hearing screaming. There is also a hysterical mother, Maria Lanau, with her daughter Jennifer (Claudia Silva). She is a sick with what her mother believes to be tonsillitis. Also there is a Japanese couple with their child and a medical intern Guillem (Carlos Vicente). I should point out that many of these characters do not have names so I’m giving the actors names instead.

The police arrived first with an older one, Vicente Gil, and a younger one, Jorge-Yamam Serrano. They’re not thrilled about the film crew here and Serrano constantly wants them to stop filming. They go up to the apartment where the screaming was coming from and it belongs to an older lady, Sra. Izquierdo (Martha Carbondell). They go in and she is standing there. They go to help her and she bites Vincente in the neck. They knock her out and take him downstairs. As they try to leave, they’re sealed in by a medical team. They’re told to stay back and wait for the health inspector as they’re under quarantine for the time being.

We quickly see the deterioration of humanity when Álex falls from a couple stories on to his head and the residents start to blame each other for what caused this infection. Serrano and Manu try to keep everyone calm as they work out what is going on here and to find a way out. There’s much more to the story as Ángela interviews the residents and this apartment is harboring a dark secret.

As I’m starting to write my analysis, you know that I’ve already seen the remake and I’ve also heard a couple podcasts break this film down. I didn’t think that it would ruin the film, assuming that this version wasn’t too much different from the one I had seen previously. I can say that I see why this one is better now after this viewing.

The first thing I should cover is that this is found footage. As a story guy, I really need a good reason for someone to be filming everything and why do they have the camera in hand at all times. I think this one presents a great story there. We have this documentary film crew who happens to be stuck in what is happening. You get the feel that the government is going to cover this up, so we have them filming everything to ensure that the truth gets out. I’m not going to lie though, even though I had an idea of the ending, I still feel like despite their efforts, they aren’t going to make it out of here. Any time you get a government cover up, you have that glimmer of hope that you know is ill advised.

I want to transition to what this film really becomes, which is an infected film. Much like 28 Days Later, I don’t consider this a zombie movie. I think that is a subgenre from the zombie film, but these are definitely infected people. Much like the other film I referenced, it does feel like a form of rabies. There is also a bit of a religious angle here that I love. It is very subtle and late in the film, but this idea of how to explain a very common horror film concept is amazing to me. Taking it a step farther, it actually has an interesting idea of how it is working here that is different from things in the past.

The last aspect of the story to cover is the deterioration of society. If you know me personally, you know that I’m a generally positive person in my life, but overall on humanity I’m extremely nihilistic. I just don’t think humanity is a good thing for this planet, but I’m making the best of my existence. I bring this up because I love to see what happens when you isolate people like we get here and see how they immediately turn on each other. We have Serrano who takes his fear out on Pablo and Ángela for wanting to film this. The hysterical mother and others blame the Japanese family, because their culture is different. In times of crisis, we see how quickly we breakdown to primal ways.

That will take me to the pacing of the film. This doesn’t waste any time getting into introducing our characters and the premise of what we are going to see. We get to the apartment building quickly and it doesn’t take long for the first attack as well as them being sealed in. It does slow down a bit in the later second act, but we need that for important bits of information for the climax and ending. There are subtle things that we get that pay off big, which I love. This film also has a shot runtime of 78 minutes and I think that helps. There’s really no filler there. I do really enjoy how it plays out as it’s an ending that I prefer.

To the acting, I would say that for the most part it feels a bit amateur, but that’s good. Velasco seems like a professional newsperson who is still pretty new to the game and that works for the type of show she’s on. It is where someone would get their start. She does get a bit annoying, but I think that comes off realistic in the situation she finds herself. She is also quite attractive as well. Terraza is pretty solid and I like that he is the counter to Serrano who hates that he’s being filmed. Rosso is good as the cameraman. I would say that the rest of the cast rounds out the film for what is needed. I also thought the infected people did well at being scary as well. No one stands out, but if I’m honest, I’m glad they don’t. I think that could take away some of the realistic feel to the movie.

As for the effects, I’m glad they didn’t go heavy with them and stuck to practical. When you have CGI in a film like this, it can really change the feel and lose some of that realism. This didn’t do that. I think the use of the hand held camera was good, it feels like we are right there with them. There’s even a slight breaking of the fourth wall that works. I thought the look of the infected people was creepy as well.

The last thing to cover would be the soundtrack of the film, which I’m glad to say there really isn’t one. If they would have led of telling us that this footage was finally being released, then I’m okay with adding one since that is post-production. Since we are seeing this play out, I like that is just the ambient noise. We can hear though when characters are too far from the microphone and there are noises in the distance that really help to build tension. It was well done.

Now with that said, I’m mad at myself for waiting so long to see this film. It is even crazier that I really like the remake and this one is definitely superior. I really like the concept here of this late night show filming this and they get caught in the nightmare. The explanation we get on what is causing this is quite natural and I can buy it. The acting fits for the found footage and I think that aspect is done very well to make it feel like this really happened. The effects are something else that was strong and the soundtrack definitely helps to build tension and keep that feel of realism. I really have no complaints and would highly recommend seeing this one. I will warn you though, this is a Spanish film so I had to watch it with subtitles. If that’s an issue, I would avoid this.