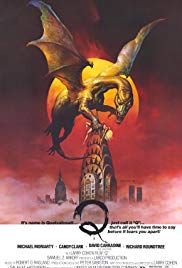 This was a film that I heard about when I first got into podcasts. The concept really intrigued me as I’m a fan of mythology and remembered learning about the Aztec god it is based on, Quetzalcoatl. I’m a big fan of Larry Cohen and his guerrilla style filmmaking as well. When I saw a documentary based on him, definitely made sure this was on my list of films to see. The synopsis here is NYPD detectives Shepard (David Carradine) and Powell (Richard Roundtree) are working on a bizarre case of a ritualistic Aztec murder. Meanwhile, something big is attacking people of New York and only greedy, small time crook Jimmy Quinn (Michael Moriarty) knows where its lair is.

We start this off with a woman in her high rise office. There is a window washer outside who is cleaning when he’s attacked by something. She sees it and screams. There are other similar attacks, including a woman on her roof who is sunbathing that is taken away by a bird-like creature. We just get a glimpse of it.

Inside of a different room, Shepard and Powell are investigating a murder of a skinless man. They learn that he has been flayed. This causes Shepard to look into this and it leads him to a museum where he learns about Aztec ways of human sacrifice as well as the god Quetzalcoatl. He is given some books that make him realize, this bird could possibly have really existed, as there are similar things in ancient Egypt as well as China.

During all of this, Quinn is a getaway driver who is having lunch with some criminals. They’re planning a job that he is willing to do with them, if they meet his requirements. He is reluctantly though, as his girlfriend Joan (Candy Clark) tells him about the bar she works at needing a piano player. He tries out, but the bartender isn’t feeling it. This does bring him to meet Shepard. The job that Quinn decides to do doesn’t go as planned. He flees with a satchel, but loses it. He tries to hide out at the top of the Chrysler Building, but he makes a horrible discovery. He avoids going home at first, but the men he did the job with are after him.

Shepard makes a report that these murders and attacks by the giant bird are connected. He believes that someone is doing the Aztec rituals to summon it. Capt. Fletcher (Fred J. Scollay) believes him, but they’re not sure where to look. Quinn has what their looking for, but he also has some pretty high demands as well.

This one is definitely what I thought coming in, but I don’t mean that in a bad way. Cohen just had a way of making films and it gives me joy when I watch them. I think a lot of that is he’s a film fan first and his way of writing just really works for me. The depth to the story is just quite amazing and what he can do with such a low budget is the other aspect. I also love that Cohen had the where-with-all to use Q names and pictures that look similar to Quetzalcoatl as little Easter eggs.

I’ve already dropped that I like mythology. Quetzalcoatl is an interesting deity that you really don’t hear a lot of about, mostly because it is Aztec/Native American so it doesn’t get as much fanfare as Greek or Roman. This film incorporates not only this creature as being real, which I dig, but we also get a madman who summoned it using the old rituals. If I have a drawback to this, I wish they would have focused more on trying to find him as that seems to be rushed through and we got more of things that weren’t as interesting if I’m honest. I was wondering how no one would actually see this creature, but they do a good in covering up why it isn’t seen sooner and that it could feasible. Going a step farther, it is seen and there’s a bunch of witnesses, they just aren’t completely sure as it flies in front of the sun so they don’t get the best look. I thought that was pretty genius way to extend this.

Going from here though, I do like that we are following the police as they’re investigating what is going on here with the parallel of a criminal who stumbles upon the truth as well. I like that Shepard looks at the facts and logically realizes what is happening. There’s a bunch of facts and they don’t just brush it away. Taking it even farther, the Commissioner (Malachy McCourt) even wants to cover it up by not connecting the dots which I actually believe here. Quinn is interesting as he’s more of a victim of circumstance. He hates the police and has been institutionalized to be a criminal. I like that the fate of New York falls on him.

That takes me to the pacing of this, which I think is good. This runs 93 minutes and I think that is perfect. It doesn’t waste time getting into what is going on and introducing us to our main players. The murders and the attacks by the creature happen periodically, driving up the tension. The only time that it does lose anything is when they’re focusing on Quinn to reveal what he knows. It doesn’t hurt it, but I would have liked a bit of investigation into the man doing the ritualistic killings as that is glossed over. I did like the ending and how it played out though.

As to the acting here, I think that it’s pretty solid across the board, but I do have some slight issues. Moriarty is good here, except I don’t buy him as the criminal he is supposed to be. I love how eccentric he and that really works, especially when he’s negotiating with the police. All of that works for me, it is just that one aspect of the character that didn’t. Clark is fine in her role. Carradine I think is great as the detective who is investigating the murders and how it spills over into the creature. I also really like Roundtree. The rest of the cast really helps to round this movie out for what is needed as well.

To the effects, I really think that for the budget they had, they did a solid job. I like that old techniques were used for Quetzalcoatl and even the attacks on people were good. They did hide it a lot, which I think is the best course of action there. The blood and bodies that we see I really dug, as that was done practically and looked real. The only issues I had were doing the climax. There were some things that didn’t hold up, including the fire from bullets and some of the attacks. I will say though that I did enjoy how this film was shot. It really makes New York look gritty and almost a character in its own right. I give a lot of credit there.

Now with that said, I had a lot of fun with this film. I really like the concept of bringing this mythical creature to New York and grounding it in reality. Having the ritualistic murders on top of that and connecting the police with the parallel of this crime that happens is genius writing. If anything though, I do think that this is hurt by focusing on some of the wrong things that could have really made this even better. The acting is solid aside from the miscasting of Moriarty as a criminal. The effects are a bit dated, but most of the work and the filming of this are really good. The soundtrack really didn’t stand out to me, but it fit for what was needed. I would say that this is a good movie overall and would recommend it as a solid creature feature.