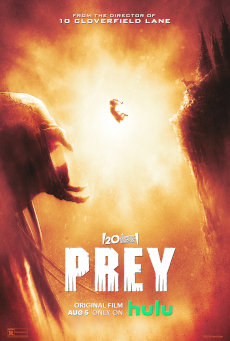 This is a movie that intrigued me when I heard about it. I’m a fan of the Predator movies, even though they’ve dipped in quality a bit later in this series. Hearing that this one was set in the past with Comanche Native Americans as our heroes, it had my interest. This is one that I’m shocked isn’t getting a theatrical run as I watched it streaming on Hulu.

Synopsis: the origin story of the Predator in the world of the Comanche Nation 300 years ago. Naru (Amber Midthunder), a skilled female warrior, fights to protect her tribe against one of the first highly evolved Predators (Dane DiLiegro) to land on Earth.

As the synopsis said, we are following Naru. Her place in her tribe is as a gatherer. Now I’m not up on their society, but this seems like a woman’s job. It isn’t out of the question though for a female warrior. She lives with her brother, who is a great hunter. His name is Taabe (Dakota Beavers). Their mother is a medicine woman and has taught Naru how to heal as well. She wants to become a warrior. We see her practicing this out in the woods with her dog.

Things change when she hears thunder and sees bright lights in the sky that look like a volcano erupting. We see that this is a spaceship that has dropped off a Predator on Earth. She takes it as a sign though and that it was a thunderbird. This was something that I liked and that was incorporated. These Native Americans trying to understand what happened since there isn’t an explanation to them.

At camp, a member of the tribe is attacked by a mountain lion. A hunting party is formed to save their missing comrade and to kill this animal. Naru forces her way in and her brother allows it. This is a chance for her to prove herself. Wasape (Stormee Kipp) who also joins them and among others, don’t think she has a place there. Things don’t go as planned though and the lion attacks Naru. She hurts it before being knocked out. When she comes to, she is back in camp and Taabe returns as the conquering hero.

Naru finds tracks of something else. She thinks that is why the lion left its cave and attacked. Something forced it out. No one believes her though. They believe it to be a bear. We get to see the Predator as it takes on a snake and wolf. It is facing off against the apex creatures in this area. It then sets its sights on the most dangerous of them, man.

That is where I’m going to leave my recap and introducing our characters a bit. Where I want to start is with my questions of how this was going to work. This movie is 1791. I did some quick math when watching this so the United States was a thing. We are in the wild west though. There are white characters in this, but they’re French fur trappers. This is an era in this part of the world where there aren’t many guns. Again, the French have them here, but none of the Native Americans. I was concerned that the Predator was just going to come in and wreck everyone. That isn’t the case and that is where I’ll start.

It wasn’t until settling in to watch this that I remember that the whole mission of the Predator is to face off against others that are at the top of their food chain on the world they land. In the case here it starts with things like a snake, a bear and a wolf. These aliens want a fair fight, that is until they are close to defeat from what we’ve seen in the past movies. Just so you know, this being isn’t coming in with its laser cannon. I like that since this is set 200+ years in the past, some of the technology hasn’t been developed yet by this other lifeform. It does have things like a gun that shots arrows, but that is to be expected. I think this is paced in a way where it builds as the Predator works his way toward humans. That is where the real fight begins.

With that fleshed out, I’ll then go over to the Native Americans. I love that they’re the characters we follow. Our lead is Naru. I will say that I think the movie is a bit too heavy handed with her not being able to join Taabe and the others. Part of it is that she hasn’t proved herself. We see multiple times in this movie that she tries to hunt and fails. I think that is fitting for where she starts and then ends up. It does feel a bit like the filmmakers see what is selling and decided to go that route. What I will give credit back to though, she is underestimated and that comes into play with the climax. She continually proves herself where some of the others get overconfident it seems. Another positive is that I’m glad the Comanches were selected because they were known as fierce warriors. We see how good they are in this from the beginning when Taabe kills a hawk with an arrow. These were fitting choices of adversaries with the Predator.

The last bit here that I wanted to delve into would be with the time it is set. I’ve already laid out the lack of guns and technology. This is also a hard world during that time. Naru has an advantage as she understands different plants and their healing properties. You would have to worry about an animal attacking. To give these characters credit, it did harden them. It also makes them prepared for what they face off against.

That should be enough for the story so I’ll go over to the acting. Midthunder was good as our lead. My issues I’ve laid out seem to be more with the writing than her performance. I like that we see her fail throughout as that makes her growth feel more real. I also thought Beavers was good. He comes off as a bit arrogant, but the more that we get to know him, the more he grew on me. I thought that DiLiegro was solid as the Predator. He brought the size needed. Outside of that the other tribespeople were good. I’ll give credit to Kipp, Michelle Thrush, Julian Black Antelope and Stefany Mathias to name a few. I also thought that Mike Paterson, Bennett Taylor and Nelson Leis as some of the Frenchmen were good. The acting in general was overall solid.

Where I’ll end this then would be with the filmmaking. I’d say that the cinematography was solid. It did feel like it was set in the past. We also get some cool shots with the Predator. I like when he’s invisible and how sometimes you can catch a glimpse. The practical effects were also good. What wasn’t always though was the CGI. They might have gone a bit over the top with the gore. I’m not going to hold that against this too much though. What I will was the CGI of the animals. The mountain lion wasn’t great. Neither was the bear. This wasn’t enough to ruin it, but it will hurt my score. Other than that, there was an issue I had with the language. These people were speaking Comanche. What takes me out of it though is when they’re speaking in English and mixing in words of the other language. I’m fine in my head knowing that the English is used for a wider audience, but they’re really speaking something else. By mixing the two, it throws me off. I did hear someone say you can watch this in Comanche, that might be needed for a rewatch to add realism back.

In conclusion, I think this is one of the better installments to the series. I like making this simple. Go back into the past and do what worked with the first two movies. I thought that the acting was good across the board. The practical effects and cinematography were as well. My issue was the commentary they tried to force in a bit too much. I understand why as it did fit for the climax. The CGI wasn’t great either. There was also a slight issue I have with the language used. Despite that, this is a fun movie and would recommend giving it a watch.