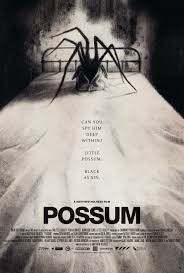 This was a film that I heard a review on one of my favorite podcasts, as well as the host of another. It really made me want to see it and when I saw that my local theater was showing it, I made a point to check it out. The official synopsis for this film is after returning to his childhood home, a disgraced children’s puppeteer is forced to confront his wicked stepfather and the secrets that have tortured his entire life.

We kick off on a train with a man watching four boys. He is Philip (Sean Harris). One of the boys glances in his direction. Philip notices he is drawing and asks about it. This freaks the kid out and he flees with his friends. It should be pointed out that we start to hear on the news about a boy turning up missing. It takes some time, but we learn it is the same one that Philip spoke to.

He goes home where his stepfather still lives. He is Maurice (Alun Armstrong) and he is an odd man. He treats Philip disrespectfully and mocks him. Philip is a puppeteer, but he tells Maurice he is giving it up. He is told that is a shame, because it’s the only thing he is good at.

During all of this, there is a rhyme that we are given in parts. It is telling of the story of the puppet that Philip has. It is quite creepy to finally see as it is a face on a small body with spider legs. What I find interesting is that this puppet is quite creepy and odd he would show it to children. We really start to look into the life of Phillip.

Through things he does, we learn his parents have passed away. He is scolded for hanging around outside of a school, especially with the boy that turned up missing. We also get that he has blackouts and wakes up with things around him being different. What I really like about this is that we don’t know if he is the reason the boy is missing. Is he moving his puppet around while he is asleep or is something supernatural happening here? I love the film continued to give us things to decide what we are thinking is going on.

This brings me to the pacing of the film. This is a slow-burn, which is interesting since the film runs less than 90 minutes. You do feel every one of them, but I didn’t mind it. I think that the film has such a bleak feel which helped me enjoy it. The setting of the film is quite creepy as the house they live in has fallen into disrepair. Philip also hangs out at a former military barracks as well as a muddy river bend. It definitely helps the feel of the film. I also thought the payoff was fine for the film and it had an interesting twist I didn’t see coming. There was a jump scare in the film that got me and some of images also made me feel uneasy.

In order to bring this to life though, the acting was very important. I’m a Harris fan ever since I saw him in The Borgia television show. His performance in this might be my hands down favorite. He looks like someone with no self-esteem. I’m not sure if something happened as to why he is giving up his work, but I could tell that life had beaten him down. It was one of the best performances I’ve seen all year. Armstrong was solid as the counterpart to him as well. They are really the only two actors and I thought they were both great.

There wasn’t a lot in the way of effects for the film, but they also didn’t need them. We do see the puppet coming to life, but it is done in a way where it could be hidden. I thought this was a great thing to do, because not only was it scary, it also didn’t look fake. The look of the puppet was unnerving enough, but it was tough to bring it to life without it looking bad. They did great there. There is also a scene where Philip is rained on that I thought was good. The film was also shot beautifully. For how bleak it was, the bland color scheme enhanced it.

The score of the film I thought was fitting for that they needed. It isn’t the best score and it wasn’t overpowering. It was one though that I would consider checking out when I’m writing, because it does set the mood for what was needed in the film.

Now with that said, I thought this film was good. It was one that I thought has a good story and twist to it, but there were some pacing issues. I liked the bleak feel it could convey. Being that it was a shorter film, but feeling every minute of it does hurt it a bit. I thought the acting was amazing though, especially Harris. He could convey so much without saying a lot. I thought the effects for the film were good and the score was solid as well. I wouldn’t recommend this film to every one though. I personally thought it was good, but it’s a slow burn type film. If you are into films like this, I would definitely give it a viewing.