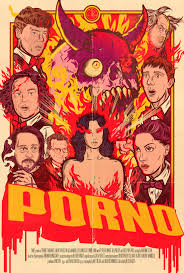 This was a film that when I first heard about it, I was pretty intrigued. I think that it was making it’s festival rounds was when it first came up, then Nightmare on Film Street did an interview with the director who gave some insight to it as well. When I heard this was finally hitting VOD thanks to Fangoria, it made me pretty excited that I could finally watch it. The synopsis here is when five teen employees at the local movie theater in a small Christian town discover a mysterious old film hidden in its basement, they unleash an alluring demon who gives them a sex education…written in blood.

We start here with a couple going at it. There are a couple of teens who are watching them of Abe (Evan Daves) and Todd (Larry Saperstein). Todd makes a statement about how he wants to go since he can’t get caught again and sent away. The two head to work at a local movie theater that is run by Mr. Pike (Bill Phillips). He’s a deeply Christian man and takes his job seriously. It seems to be the end of summer and Chaz (Jillian Mueller) has been promoted to assistant manger. Back from camp that summer is Ricky (Glenn Stott) and their projectionist is Heavy Metal Jeff (Robbie Tann). Jeff is straight edge. He hates drinking, smoking and anything that is not Christian.

This crew is allowed to a watch a movie that night after it closes. They need to decide between A League of their Own and Encino Man, which I thought was a creative way to inform us that we’re in 1992. There’s some debate as to which one amongst the group. Things all change though when a homeless man gets into the theater and runs amuck. They try to kick him out, but he reveals a hidden hallway behind a curtain. They go in looking for him, but instead find an archive room that seems to have fire damage. Inside they find a film canister that wasn’t. It is decided that is what they’ll watch, but Jeff takes some convincing by Chaz and the group.

They aren’t expecting what they get. It shows a woman nude, Katelyn Pearce, as well as a man. They perform some kind of ritual and the symbols look pagan. The canister also had a similar marking on it. Jeff shuts it off, which upsets Todd. He wants to keep watching it as it intrigues him. He bars himself in the projector room and starts it back up again. This causes some odd things to start happening as a mysterious woman keeps appearing. We also start to learn dark secrets and inner desires about this group of religious teens. This woman also might be much more as well.

You could probably tell that I was going to enjoy the social commentary that this movie is giving to us. There are some things that I won’t be able to share as I don’t really want to spoil them. There is still a lot that I can delve into and I should probably start with the religious aspect. If you know me, one of my favorite subgenres is based around this and the corruption of it. I’m sorry to those that I offend by saying this, but I think a good amount of people who follow religion use it as a crutch and can be corrupted like we see here. Even more so though, I love that the ones who are the loudest about it, are the ones that it doesn’t really take much. My thought there is that repression is something that isn’t good. It is good to the do the right thing and someone needs religion for that, I don’t have issues there. If it helps you, great, and I’m all for that, but with that said, I hate the people we get here that are pushing it on others. It is satisfying to see them get just punishment in my eyes if I’m going to be honest here.

I’m glad this movie also decided to use the succubus as the creature. We don’t get a lot of this and I think that it brings up an interesting duality here with the people that are in this theater. My first experience with this monster is from Castlevania: Symphony of the Night where your character encounters one. I’ve seen, heard and read about them since then. It is based on corruption with lust and desires, which is great when you have so much repression here. There is also a pretty solid back-story of the theater that they’re in as well. That all really worked for me.

What I did have a slight issue with though was some of the inconsistencies with the creature and what it does to people. Todd has an initial encounter with her and he survives it. Same could be said for Chaz as well. We then get to see Todd disappear for a long time and Mr. Pike shows up. I liked these encounters, but it just doesn’t seem to make sense what the rules are and how it affects these characters. There are times when their sexual organs explode with ecstasies and it kills them, where other times it doesn’t. Since I’m a story guy, it doesn’t seem like the writers actually know so they’re just kind of playing things with convenience.

Despite these issues though, I really did have a lot fun with this movie. I think there’s a really good blend of comedy with the horror elements. To be honest, there was one scene that really spooked me where I called out which I wasn’t expecting. The movie never got boring for me and I thought was paced really well. It has a good runtime of just over an hour and half. The ending left me a little bit confused, but it does wrap up pretty nicely. We did get some interesting reveals for characters as well which kept me intrigued to see how things would play out as well.

That will take me to the acting of this movie. I thought it was pretty solid for what we got and their comedic timing was pretty on point. Daves was pretty funny as that quirky, pervy teen in my eyes. He plays well off of Saperstein who is similar in a nerdier way. Abe is kind of like a Jonah Hill-type in my eyes where we have the awkward Todd who is similar more to a Michael Cera. Mueller I thought was pretty attractive. She does something horrible that was revealed and I like that. Her character works though as she is the assistant manager, so she does have some responsibility which plays out. Scott and Tann are both solid with Jeff bringing quite a bit of comedic relief as well. Props to Pearce and Amber Paul for all of the nudity they have in the movie. I thought them with the rest rounded this out for what was needed.

Shifting this over to the effects of the movie, I thought overall they were well done. The practical effects were really good. I was watching this with Jaime and she pointed out a moment where she could tell some things didn’t look real. I did agree with her at one point where we’re seeing cuts on someone and there wasn’t blood coming out. That didn’t sit well with me. Some of the CGI wasn’t great either. Aside from that though, I did think the effects were above average for sure.

The last thing to go over is the soundtrack for this movie. For the most part, it didn’t really stand out to me. That’s not to say it was bad, because I don’t think that is the case. It fit for what was needed in fitting the mood of the scene. What I really wanted to go over though was the uneasy feeling that I got from the ‘porno’ they’re watching in the movie. The music that was synced with that was unnerving and got my anxiety going. I give that a lot of credit for the feeling that it gave me.

Now with that said, I thought this movie was pretty solid on the whole. I like the cast of characters that we get here and putting them against this entity that is playing with their beliefs. I even think we get a really good blend of comedy that worked for me and we get something that doesn’t always happen when you cross over these genres, I was concerned that none of the characters were safe. There are some inconsistencies with the rules for the monster, some of the effects could have been better, but I will say that the music accompanying the movie they watched was unnerving. Overall I’d say this movie was above average for me though, probably coming up just short of being a contender for the year end.