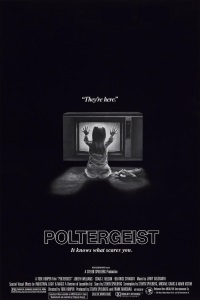 To start us off, this was a film that I first watched at a young age and I was a big fan of it. I’ve rewatched this film a few times recently, once to show an ex-girlfriend for the first time and then the other was in my local theater on a 35mm. I’ve gone back to the Gateway Film Center, where I watched this on film to watch it once again with my wife. She had seen it before, but it had been some time and she wasn’t the biggest fan. The official synopsis for this film is a family’s home is haunted by a host of demonic ghosts.

For those that do not know, this film follows a family that lives in a housing development. We get a good establishing sequence where the father, Steve Freeling (Craig T. Nelson) has dozed off in the living room watching television. We get the sign off that was used back in the day where it shows American monuments along with the national anthem before going to snow. The family dog moves room to room where we see the mother, Diane (JoBeth Williams), their eldest daughter Dana (Dominique Dunne), their son Robbie (Oliver Robins) and the youngest daughter Carol Anne (Heather O’Rourke). Carol Anne wakes up and goes downstairs. It is there she talks to the snowy television, waking her family up.

What I love about this film is that the haunting becomes progressively worse until Carol Anne disappears into the spectral realm. There is an odd part where Diane is intrigued by what is happening and messes with it. This film though is powerful in how heartbreaking it is to watch this family fall apart trying to get their daughter back. Despite the children bickering at times, this family truly loves each other. A group of paranormal researchers come to the house to help. They believe in ghosts, but do not expect what they get from this house. The mystery of why this happens is presented in an interesting way as well.

Something that I noticed after this last viewing was how modern this family is. They watch quite a bit of TV. They have multiple sets. They smoke marijuana as well as are progressive in their way of punishing their children. Dana has an odd interaction with the men that are working on putting in a swimming pool. Diane watches it play out but doesn’t say or do anything. I will say, what the workers say to her is quite creepy.

One last thing for the story is the idea of capitalism. This isn’t in the forefront but is a commentary. Steve works for the developers that build this subdivision. He sells units and part of what he can say is that he lives there. We see an interesting scene where his boss, Mr. Teague (James Karen), thinks he could lose one of his best employees and is trying to give him a better house. They meet outside of a cemetery, which plays into the reveal near the end of the movie. We are seeing what companies will do to cut corners and the Freeling family is paying the price.

Moving from there, the editing of this film is good. It being almost two hours, it doesn’t feel like it. It doesn’t take long to get going and then when it does, it builds tension all the way until the finale. I like how the film ends, but I think what happens to the house is a bit much. Going along with this, I do question some of the characters and what they do, but it doesn’t ruin the film either. Something else interesting about this film is the speculation on who really directed it, Tobe Hooper or Steven Spielberg. Upon this watch, it does feel at times there were two directors as some scenes feel like the one and at times the other. It works together seamlessly though in my opinion.

For a movie like this, it does need some good acting and we get that. Nelson is great in his look as the father. He and Williams are the cool parents and everything seems to be great. I’d say that Williams has a bigger part. She does well in it. When Carol Anne has been gone, Steve looks disheveled and they both look like they are just exhausted. Dunne is having a breakdown and it is underrated. She goes away for a long stretch which is part of it. Robins is interesting because he is scared. He doesn’t fully comprehend what is happening. I thought the researchers were great in their roles, especially Richard Lawson. He has the only bloody scene and it was great. I also want to give a shot out to horror regulars Zelda Rubinstein as the psychic they get to help and Karen who is the jerk boss of Steve. Both were great in their roles.

Something else this film is known for are the effects, which surprisingly still hold up for me today. It is surprising that this film was made in 1982 and the early CGI that was used for the ghosts looks better than some that comes out today. The only time it really doesn’t is when they go into the children’s room and items are flying around. The other is a tornado we get early in the film. It doesn’t bother me too much. The practical effects that are also used in the film are really good as well as the cinematography. Just how things are framed really helps to build tension and convey what needs to be, especially that early introduction to the family sequence.

The soundtrack for the film I also thought was good. It isn’t grand, but for the most part is quite subdued. I think that this is something that the film needed. It does ramp up the tension when a scene needs it, but a lot of times it is just there to help, but never took me out of it which is exactly what I wanted. What I will give credit to is the heartbreaking sounds of Carol Anne’s voice. We can hear her when she is the spirit realm through the TVs. That is uncomfortable with how scared she sounds.

Now with that said, I think that this film is a great one. It has a good story that is quite horrific. There are sometimes where the characters or their motives aren’t the greatest, but it doesn’t completely ruin the movie. I thought the editing was solid to build tension toward a satisfying climax. The acting for the flick is also good and it is fun to see a couple of horror regulars tossed in as well. The effects were on point as well as well as the score of the picture. This movie is interesting to help institute the PG-13 rating. I think this is a classic and deserves a viewing if you haven’t. This is also a good film to help get people who aren’t into horror as well.