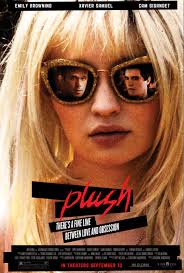 This film I’m not entirely sure how I got turned on to it. I’m a fan of Emily Browning, so I think I thought it sounded good and blinded rented it from either Netflix or Family Video. The synopsis is a young singer/songwriter, despite being married, becomes involved with her new guitarist, who she soon discovers has a dark past and may be a danger to her and those close to her.

Now this movie revolves around a band named Plush. It is headed up by a brother, Jack (Thomas Dekker) and sister Hayley (Emily Browning). They reach a level of some success and Carter (Cam Gigandet) interviews them. He hits it off with Hayley and they get married. They have two twin boys. While she is building this life, the siblings stay close. Her world comes crashing down when he overdoses on heroin.

Plush has stalled. Hayley has fallen into a depression. She has written a new album that is all about her feelings about what her brother did. She meets with her manager, Annie (Dawn Olivieri). They audition someone to replace Jack in the band. The one that catches their eye is Enzo (Xavier Samuel). He knows all of their songs and can play them all well. He’s also a huge fan of the band.

They go on tour and their first show is back in Hayley’s home state of Texas. They do the show and the crowd loves it. The band plays one of their new songs and it doesn’t go over well. At the after party, Hayley notices Enzo hitting on a guy. She immediately assumes he’s a homosexual. She goes off to be alone and runs into a fan that loves her. When he gets a little too pushy, Enzo comes to her aid. They hide in a bathroom. After they get away, they go back to the hotel together.

She invites him back to her room. She tells him her feelings and how the music is suffering because they used to bounce ideas off each other. She hasn’t had that since he died. He offers to help her and to allow her to do that now. He ends up giving her a massage. She is drunk and blacks out. There are images telling us that they sleep together.

The next morning Annie and Hayley talk. Hayley  learns that the new album is not doing well at the moment. She doesn’t know what to do. They play another show and again the new song doesn’t go over well. Hayley goes to Enzo this time and they compose a song together. He kisses her and she stops him. She doesn’t realize what happened that night. She breaks down and decides it will be something that happens only on tour.

That’s not the case though. Things get more complicated when with how bad the album is doing, Hayley cannot distance herself from Enzo, even though this is becoming problematic to her personal life. She really doesn’t know a lot about him and this becomes a major problem with keeping her family together.

I have to say that this film was a pretty interesting take on the crazy lover concept. It poses many issues of duality and of ‘forbidden fruit’. If Browning wants to continue her career, she needs inspiration. Her inspiration is similar to her brother, who she kind of had an odd, border-line incestuous relationship with. This choice makes her decide between her good husband and the bad boy.

The film started out making me think there was going to be a serial killer and we were going to try to figure it out. It definitely is not that. This is more of a fatal attraction in a rock star family. Doesn’t ruin the film, but definitely knocks the rating down for me. That leads me to my biggest problem, which comes with the pacing.

My biggest problem was I wasn’t sure where this film was going until it got to about 40 minutes left. I knew there was going to be an affair, but I didn’t realize the take it was going to go with. I don’t mind the building of the relationship, but then it becomes problematic as there’s not a lot of time left in a movie that runs a bit long to begin with.

What really did hook me was the acting which I thought is good. I’ve already said that I’m a fan of Browning and I think how she takes on this character felt real. She can really play this broken character very well. Samuel does very well as this crazy, obsessed lover who holds a deep dark secret. I like that to help drive the tension. Gigandet I thought was fine, even though I don’t think he’s the greatest actor. He does seem to get by on his looks, even though it only seemed to be a stretch that it gave him parts. The rest of the cast was fine for what was needed in my eyes.

I would recommend this film if this review sounds good to you. I think Browning is a pretty solid actress that takes on tough roles. Samuel was really good in this one as well. The rest of the cast do a solid job and help round this film out. The story is good, but it does take a little too long to get to its point. There is a good twist at the end also. If you like films like fatal attraction were love is taken too far, I would recommend giving this one a viewing. This one is not the best, but definitely could do a lot worse. This isn’t necessarily horror, but I do think it has enough elements to put it close, especially with Enzo and how far he’ll go. If it would have leaned a bit more, I think I’d be higher for sure.