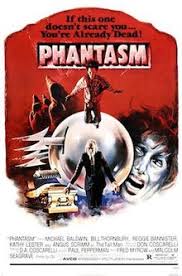 This was a film that it took me awhile to see for the first time. I remember when the third film in the series came out and I watched it on the movie channels, having no idea about the earlier two. While in college I got the chance to see this original film and then again when it came to my local theater on 4K. In prep for the Summer Challenge Series, I watched this with a commentary of the writer/director, Don Coscarelli, and two of the stars of the movie.

Synopsis: a teenage boy and his friends face off against a mysterious grave robber known only as the Tall Man (Angus Scrimm), who keeps a lethal arsenal of terrible weapons with him.

We kick off with a man and a woman having sex in a graveyard. His name is Tommy (Bill Cone) and the woman is Kathy Lester. There’s something not quite right about her as we see her kill him.

At the funeral, a couple of guys meet up. One of them is Jody (Bill Thornbury) and the other is Reggie (Reggie Bannister). We learn that Jody’s parents passed away a couple of years ago and funerals creep him out. He goes inside to pay his respects to his parents before the funeral begins. His younger brother, Mike (A. Michael Baldwin) was not brought along because the funeral for his parents tore him up and it gave him nightmares. We see that Mike is an incessant kid. He shows up and spies on everything.

Mike sees the Tall Man lift the heavy casket of the grave by himself. He also hears and sees something small scurrying around him. He does what he can to convince his brother of what he is seeing, but he doesn’t believe. Jody is worried that Mike is going to revert to how he was right after their parents passed away. That is until Mike goes to the funeral parlor and brings back real evidence to prove there is something not quite right going on. It then becomes a battle with Jody, Reggie and Mike trying to stop the Tall Man. Things aren’t as reality is bent in this struggle for survival.

This film is intriguing. I tried to go as vague as I could, because I don’t want to spoil anything for it. I do feel that this is a film that you need to experience regardless though. As I said earlier, I had seen the third film before ever seeing this one and it still doesn’t ruin anything in my opinion. Something about this one is that it was made as a stand-alone movie. It did leave itself open for a sequel, but that is just the nature of horror filmmaking

I will admit that this deserved sequels. An issue I have with this one is that writer/director Coscarelli never explains what is going on. I’m usually a fan of ambiguity and piecing things together. This one though I do think that a little bit more is needed and a lot of that comes from the fact that he sucked me into the story. The Tall Man and his small minions are so creepy and interesting that I want to know more about them. We get a glimpse of what could be going on in this film and that just makes me want to know more. I’m not going to hold this against the movie. I want to set up that.

Going from here, I do have to say that the atmosphere is amazing. It has such a nightmare quality to it. What makes this interesting is that this film was done on a microbudget. Coscarelli had to ask people to help fund this and it took quite awhile to complete. I think some things were probably too difficult to film so it helps enhance that nightmare feel and I dug it. It also feels like he had seen movies from Italian earlier in the decade as well. By going with dream logic, it creates convenience issues as well. I’m not a fan to explain things away with nightmares, but since this plays with reality, I’m forgiving.

The feel is also helped by the editing. It has a tight running time of just less than 90 minutes and that works. This is one that I would have liked maybe a little bit more as there are so many things that are left unexplored. I would say that the budget issues might have been why, but this series never fully explains anything and it is left open for theories. It isn’t fair to hold what later films don’t do, but since it isn’t explained here it is relevant evidence. I will give credit to the writing for showing something early and then harkening back to it as well. It gets a little bit too in the face, which I thought could be toned down, but I still like doing that.

As for the acting, it is quite surprising that it is people that Coscarelli knew, but I think it works out fine. Baldwin is interesting that he never listens and he is quite inquisitive. He drives the story and I thought his portrayal was fine. Thornbury was perfectly fine as well. The only issue I have with his character is he doesn’t believe his brother, but then suddenly sees one thing and is onboard completely. The evidence doesn’t necessarily prove anything, but it doesn’t ruin the overall product. He is also telling his brother to stay home when he investigates. That can get a bit repetitive, especially when bad things happen when they split up. Bannister in this film is fine. He doesn’t get much screen time, but I thought he was fun. Scrimm was great as the villain. He just has an angry, menacing look and the size to go along with it. The thought the rest of the cast fit for what was needed.

The effects were also good. Things were done practically, which I love to see. There’s not much in the way of human blood. During the commentary, they said part of that was to get an R-rating. They did make the Tall Man have this bright yellowish color, which makes sense and I liked it. There’s an evil fly that doesn’t look great. That did make me laugh. I’ll give credit to go practical and the acting to make it seem alive. I will say that the silver spheres are introduced and are a staple of this franchise. I thought how they moved was quite impressive. There is good cinematography here, which adds to the overall feel.

The last thing to go into would be the soundtrack. This is one of the strongest parts. It gives the film such a creepy feel and I love it. It builds tension and it helped to get my anxiety going. This would be a score I would come back to for sure when writing. The main theme is used a lot and its one of my favorites.

In conclusion, this movie is quite impressive for what Coscarelli had to work with. I thought the story was interesting and it had me wanting more. It has a nightmarish feel to it, which is aided by the score of the film. That is my favorite aspect. The acting isn’t great, but it fits. They bring the characters to life with distinct personality. Special credit here to Bannister and Scrimm. It is edited well and moves at a good pace. The effects for what they had to work with were also good. It is does have its flaws, but this is a classic. After multiple viewings, this is a great movie, especially for the budget.