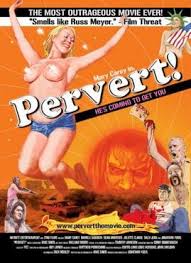 This was a film that I recall playing at my local theater when I was in college. Looking at the release date, it would have been a couple years after its release and it was playing as a midnight movie. Having seen the film now, it actually makes a lot of sense. The synopsis for this film is a young man comes home to visit his father and his new wife. The problem is that there is a killer that follows him home and seems to be targeting women.

It kicks off with narration from Malik Carter. He is speaking quite cryptic, but we do know there’s going to be nudity, blood and gore. We then meet the son, James (Sean Andrews). He picks up a hitchhiker and when she discovers what’s in the glove box, she gets out and mocks him. He’s embarrassed but continues on to his father’s home.

His father is Hezekiah (Darrell Sandeen). His mother has passed away and Hezekiah is now with Cheryl (Mary Carey). She is a former stripper and she is kind over the top in her sexuality. James is trying to ignore her, but the two of them end up making love, quite a bit. One night, something comes out from under James’ bed. Cheryl is murdered that night. James blames his father while he blames his son.

It doesn’t end here though. Hezekiah ends up finding another woman, Alisha (Sally Jean). She is quite mean to James, but in the end she also falls for him as well. There is another weird POV that is distorted and again from under James’ bed. There is also the subplot that the odd dreams he’s having with a witch doctor (Edmund Johnson) might have something to do with what is happening. Who is doing these killings? Can it be solved before it is too late and piling up more victims?

Now I came in not really knowing to expect. When I saw it was a horror/comedy, I figured that it would be a bit over the top with the title. It wasn’t until I finished it and started to look into it a bit before writing this that this is making a modern interpretation of exploitation films. To be more specific actually paying homage to Russ Meyer, who was known as the king of nudie films.

I do have to say, this film isn’t for me. I’m not the biggest fan of films that are completely outrageous like this one. I’m sure this film is on par with the films it is paying homage to though. My biggest issue though is that it too forever to get to the horror aspects of the film. It has a low running time of 81 minutes and really didn’t get to the horror aspects until legitimately halfway through. The film also comes off a little bit boring for me, but that is probably due not really enjoying what they are going for. That’s just not really my cup of tea.

I can’t really say anything bad about the acting, which is next on the docket to cover. I can say it is amateurish, but I believe they are over the top on purpose. Andrews is so awkward, which is funny when the ladies are attracted to him. It does make sense later in the film. Carey isn’t bad and the same for Sandeen. I think the acting actually fits for the tone the film is going for and with saying that, the rest of the cast is on par.

Next I’ll cover the effects of the film. I was glad to see that they were done practically. The film did hide a lot of it, which is a good move actually. There is mostly things done with make-up and the blood looked good. Hezekiah works a lot with meat, which I’m assuming was real and was bit odd. There also was some stop-motion and what it is using it on was a bit outrageous, which is the major theme of this review. It doesn’t look bad, but it also wasn’t great. I do think the film was shot well actually.

Now with that said, this film I think really has a niche audience and it wasn’t really for me. I do give them credit for paying homage to the films of Meyer’s, but I think I might need to seek out some of his films to get a better understanding. The story is disjointed and doesn’t flow like I wanted it to, but it did has some funny aspects. The comedy really didn’t land with me though. The acting is over the top, but that was definitely what they were supposed to do. The effects were actually pretty solid, even though there aren’t a lot of them. The soundtrack of the film didn’t really stick with me, but it never took me out of the film. Just to re-iterate, for me this is a bad movie. I do think there is a group of people out there that will like this. I could definitely put it on at a party of dudes just to laugh at for sure.