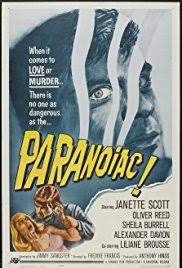 This film begins showing us that a married couple died in 1950. Around the side of the tomb we then see that one of their children passed away three years later. We then go inside of the church where the minister is conducting a memorial service for the parents. We meet that Aunt Harriet (Shelia Burrell) helped raise the other two children. The daughter is Eleanor Ashby (Janette Scott). There is then the other son, who is playing the organ. His name is Simon Ashby (Oliver Reed). Eleanor has a panic attack and faints when she sees a man in the doorway. The official synopsis for this film is a man long believed dead returns to the family estate to claim his inheritance.

I came in to watch this film because it was part of a double feature DVD. I only read the most basic premise of what this film was about and I’m glad I did. I first off want to say that I really like Reed. I’ve seen him in a few films and I think he is great. He does very well at playing the emotionless psycho, but he actually has some range when he needs it. I love the different concepts that go into this film. The first one is that a man who is embezzling decides to just take all of the money by getting someone to pose as the brother whose body was never found. The problem though is someone knows what really happened to him and that can’t be revealed. There is also a creepy scene around the climax that I wasn’t expecting that was interesting as well. This scene helps lead into the final reveal. I also want to point out that Scott and Brousse were very attractive as well.

Despite giving him all the praise, I have to say that Reed doesn’t show much emotion in this film. He is great as the crazy character and comes off as arrogant as well as spoiled. The film doesn’t do a great job at trying to hide the fact that he is involved with the bad things that are happening or that he is crazy. Now I’ve read a lot of that is just his look, which is hard to hide. I also found it a little odd that Scott falls in love with Alexander Davion, because at the time she thinks it is her long lost brother Tony Ashby. We know that it isn’t, but this family has a lot of issues.

Now with that said, I really enjoyed this film. The acting was good, the concept was good and the only thing I will say that story was a little slow at times. I thought that Reed was great as the psycho and I really liked the person in the mask that is trying to keep their way of life the same. There are some underlying issues with this film. I will point out that this film is from the 1960s and is in black-and-white. If that is an issue for you, then I would avoid it. If you can get past that, this film is definitely worth a viewing.