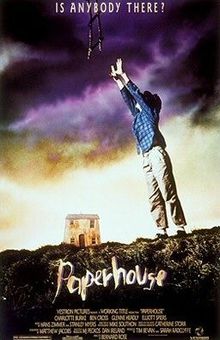 This film might not be necessarily considered a horror film, but I definitely think that it is adjacent to the genre. This is a haunting tale following a young girl lost in the loneliness and boredom of reality. She finds solace in an ill boy, whom she can visit in a surreal dream world that she drew in her school composition book.

We begin with Anna Madden (Charlotte Burke) in school. We actually see her draw a house. What I like here is that is looks like a child drew it. It isn’t perfect and some of the dimensions of the house and the surrounding yard are a little bit off. Anna gets in trouble and is then kicked out of class. She does tell the teacher she isn’t feeling then faints. Her mother, Kate (Glenne Headly) comes to pick her up. Anna is actually an unreliable character in this film as she lets on that she was faking, but soon after when she goes back to school and skips out, she faints again.

During this fainting spells, her dreams takes her to the house that she drew. Inside on the second floor is Marc (Elliot Spiers). He can’t walk or come down. At first it is because there are no stairs. He isn’t sure how he got there either. She is told by her doctor, Sarah Nicols (Gemma Jones), that she is to be on bedrest until she is better. Anna uses this time to draw more things for Marc. Every time she goes to sleep, she goes back to this house. This takes a turn when she is frustrated with her illness; she draws her father, Ben Cross, and is not happy with how he turned out. It is interesting that everything she draws, she is unable to erase any of it. She crumples up the drawing in a fit of rage and this world changes. Her father is quite a scary man in it.

The editing of the film is good and definitely helps with the pacing. When Anna is sick, I started to worry that she wasn’t going to get better. It doesn’t help that she fighting the treatments along the way. I also was a bit confused as to what the ending of the film is trying to tell us. I like what it did, but I was torn between was this dream world she kept going to, was it real or was it her imagination? By paying attention to the film, I did pick up that a lot of things she knew about Marc was from overhearing Sarah, but something that happens near the end threw me for a loop. I do like that the world though is mostly a fever dream, which I’ve definitely dreamt some very vivid things under similar circumstances. Coupling this with how unreliable Anna is, it definitely kept me interested.

As to the acting of the film, I thought it was pretty good. This is literally the only thing that Burke acted in and I thought she was pretty good. Her character was very complex and she did well at portraying this as a child. She also has some beautifully blue eyes. Headly is an actress I had seen in other things and I thought she did good in this role as a mother that’s struggling. Her husband is away with work a lot and Anna is a handful. Jones wasn’t bad, but I don’t know if I buy she would divulge some of the information she did as a doctor to Anna or Kate. Cross also had a tough role. He is the absent father, but he is doing what he can and actually gets a job near the end to be more present their the two ladies’ lives, but there was some damage done by him being gone that Anna is not very forgiving about. I thought the rest of the cast round out the film well.

There aren’t a lot in the way of effects. The film didn’t bite off more than it could chew with having the dreams come to life. I like that they went practical with it and made the odd world come to life. They did it in a way that it looked very believable. I also like that the dream doesn’t have what Anna draws until the next time she goes to sleep. A film can get cheesy if things like that are done where she can just think it up. I like the rules the film set-up and stuck to here.

The score of the film I also thought was good. It doesn’t stand out as a great score, but it does have a recurring song that I liked. It definitely fit the scenes for what they needed it to and it was entertaining. I don’t have any issues here.

Now with that said, I came in not knowing anything about this film and I ended up enjoying it. I debated whether or not to do a review or not. I decided that I would consider this horror adjacent due to this nightmare that Anna experiences. She actually is quite sick and almost dies as well. There is also a sequence with her father in the dream that was quite creepy. The film is paced well and I thought the ending was decent. I do think I may need to rewatch this as well to figure out more now that I’ve seen it. I thought the acting was pretty good. There aren’t a lot in the way of effects, but they did a good job at bringing this world to life. I also thought the score was good and had no issues there. I feel that this is a good film and deserves a viewing. I will say that this film is from the United Kingdom and the accents are a little thick. It was hard to figure out some of the things being said and some of the slang terms were fun. If that’s an issue though, I’d avoid this, but I definitely didn’t think it was that bad.