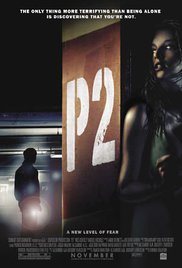 When this film came out and I wanted to see it. It took me some time before I finally got around to it. The official synopsis is a businesswoman is pursued by a psychopath after being locked in a parking garage on Christmas Eve.

I want to lead off saying that I enjoyed it. The concept isn’t completely new, but I like the idea of someone being trapped in a modern building. With all of the electronic locks, someone like Thomas (Wes Bentley) could most definitely trap someone. What makes this even creepier is that he comes off as a nice guy. As the story develops, we see that Angela (Rachel Nichols) is really in trouble. His depravity gets worse as the film develops and I love that.

Going along this, the film doesn’t really have a deep story behind it. It is a game of cat and mouse that continues to develop. It does have deeper meaning though. This film to me makes you question the work-life balance. Angela is scolded by her family many times and it ends up getting her trapped. To go even farther, Thomas is given more time to stalk her, being the the hours he works there and he wants to give her the love he feels she needs and is lacking.

The pacing and editing of the film I thought was good too. A film like this gets bleeker as it goes on, which I think it needs to. This film makes you question how it will play out, which I think is a solid move. I didn’t mind the ending, but it does get a little bit far fetched. Not enough to ruin it though.

I thought the acting from the two stars was good. We have the interesting diatomic where Bentley is the man and has the power in the beginning, but as the film progresses, Nichols who is a woman and to some considered the weaker sex slowly gains more and more of the power in a situation she has little control in. I really liked that concept for the film as it takes look at the plight of feminism.

This film does come with some issues though. For some reason, there are stretches of this film that I found boring. I think part of this is that we have the same location for pretty much the whole film and we have only two actors for the most part. I thought both did well in their roles, but this is a hard film to carry and I don’t think either did enough to fully take control. I also had some issues with the game of chicken that is played near the end between the two; it just felt odd to me. If they crashed, it doesn’t seem like it would be smart on either person’s part.

Now with that said, I personally enjoyed this film and would recommend giving it a viewing. The film is a tad boring for stretches, but I think the concept is really good. Bentley plays the psychopath very well and at times I kind of feel bad for him. I really like the transformation we get from Nichols from the victim to the survivor. This film has similar plots to others, but this one is scarier to me being that she is trapped in a building due to modern technology. As stated, this isn’t the best from this type of film, but definitely entertaining. If this sounds good, give it a viewing.