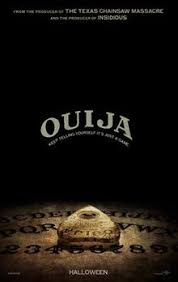 This was a film that I had heard about and it was a bit intriguing for me. I of course have played with an Ouija board as a child and that came to an end after seeing The Exorcist. I was slightly disappointed to see that it was a PG-13 horror film, just due to the era it came out and what many films are like today. To get into this, this official synopsis is a group of friends must confront their most terrifying fears when they awaken the dark powers of an ancient spirit board.

We start off with two little girls playing with an Ouija board. They promise to never play it alone. It then shifts to present. We see are girl messing with an Ouija board by herself. Her name is Debbie Galardi (Shelley Henning). She gets a call from her friend, Laine Morris (Olivia Cooke), trying to get her to come to a basketball game with her. Debbie declines. We see her later settle down to dinner. A door behind her opens and then a burner on the stove turns on. She goes upstairs and then hangs herself with a string of lights.

Laine meets up with her boyfriend, Trevor (Daren Kagasoff) at the local diner. Their friend Isabelle (Bianca A. Santos) works there. Debbie was supposed to join them. Laine gets a text message from her dad to come home. It is there they it gets revealed she killed herself.

She doesn’t believe that Debbie would do this. She gets the idea to use the Ouija board in order to contact her. Her sister, Sarah (Ana Coto), Trevor, Isabelle and Pete (Douglas Smith), Debbie’s boyfriend, all go over to Debbie’s house to try to contact her. They seem to have made contact with something else. There is a little girl with her mouth sewn shut (Sierra Heuermann). There is also a mother (Claudia Katz Minnick) coming after them.

Laine has to try to get to the bottom of all of this before it is too late. This takes her to seek out Paulina (Lin Shaye) who is the surviving sister of Doris. The entity is getting stronger though as Laine’s friends start to die.

To start on what I like about the film. I don’t mind the idea of using the Ouija board to start all of this. It isn’t a new concept, we see this quite a bit. You have to bring something new and fresh, which unfortunately this film didn’t do. It felt very generic like they were just going through the motions. I never connected with the characters either, so I didn’t really care about what happened to them, which is also not good.

Going along with that though, I came in expecting the film would rely on jump-scares, which is the easier way to go. It didn’t even feel like they did that. I really just found myself bored during this film, which is something that really bothers me. That was how the pacing of the film went as well. Like we did get information to unravel the mystery, but none of it was that exciting. I personally believe that one of the worst things that a film can be is boring.

They tried to build suspense with all of them that played the game seeing the same phrase of ‘Hi Friend’ and using videos to lead them to the next clue. I think part of the problem with this is that it explains too much instead of showing us and letting it be revealed. The one thing that did seem somewhat interesting is that all of the deaths that happen look like suicide. That helps with the paranoia as the parents don’t believe their children. The problem though is we never see Debbie’s parents after the funeral and Laine’s father goes out of town for the rest of the film.

What makes it even worse is that there are some good actors in this film. I’m a big Cooke fan when I first saw her on the television show Bates Motel. Whenever I see her in a film, I’m pretty excited to check it out, but this one she was okay. Same thing with Shaye, we don’t get a lot of her and it just came off as flat. I won’t breakdown each performance, because it really is much of the same.

The effects in the film were fine. The CGI actually didn’t look at that bad. We do get to see the spirits faces contort as they do things. I didn’t mind this and it actually looked pretty good. Doris also has stitches over her mouth, which I thought looked pretty good as well. The only newer thing this film introduced is that if you look through the placard you can see ghosts around you. It doesn’t add a lot, but it was probably the only new thing to the film.

As for the score of the film, it didn’t really stand out to me. Much like I normally say, it doesn’t hurt the film; I just do not remember it. It never took me out of the scene, so I won’t hold it against it.

Now with that said, this film was a real disappointment. It is tough as it is a concept that has been seen a lot, so you have to come in doing something different. This one didn’t do that and it almost seemed like everything was just going through the motions. The story was boring, the pacing didn’t help and the actor really seemed uninspired. The effects were fine and the score didn’t hurt or help the film. I really can’t recommend this film and I think it is below average. I do think that this film is aimed at teenagers, so if you have someone you want to get into the genre, this would probably be a film they enjoyed.