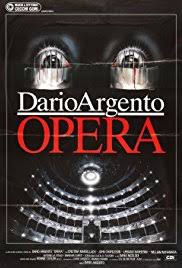 I have to say that I have seen a few films from Dario Argento, but this is the first time I’ve seen his take on the Phantom of the Opera. The official synopsis is a young opera actress is stalked by a deranged fan bent on killing the people associated with her to claim her for himself.

I want to lead off stating that I really liked this one. This film I would say is loosely based on Phantom though. The admirer does help her get the lead role, but he is not someone who lives in the opera house like the original story has. What I did like about this take on it was that it is a giallo film. It left me guessing until near the end. I really liked the camera angles, as a lot of it is from the point-of-view of the killer and there are a lot of interesting placements of the camera as well. This film is quite graphic and got me to cringe in a few places, which I really liked. The blood and gore of this one isn’t over the top, which sometimes I’m not a fan of, but I think it is really well done.

This film did have some issues though. I felt that the acting was a little bit off, but not from everyone though. I thought Cristina Marsillach as Betty was good. It was also fun for me to see Daria Nicolodi and Coralina Cataldi-Tassoni, as both of them are staples of Argento films.

I also wasn’t a big fan of the twist at the end of the film either. I thought it was interesting at what the person does to survive, but I didn’t like how it ends. It was odd though that he wanted to cover up, but what happens at the end doesn’t make sense. The film does move a little quick and it moves through some parts a little too fast.

The score of the film was good as well, which tends to be a norm of Italian and especially Argento films. This is a definitely a plus for it in my opinion.

Now with that said, I really liked this film. Coming in to seeing this film, I knew that it was based on the novel and was done by Argento. After seeing this one, I really liked it. The concept and story were good. I liked the point of view from the killer and how it makes you wonder who the killer is. There is just enough blood and gore and parts to make you cringe, while also keeping you guessing. The acting is a little off and some parts I didn’t really care for, but it was not enough to ruin it. With that said, the film isn’t the most faithful adaptation, but it is a good film and interesting to make Phantom of the Opera into a giallo film.