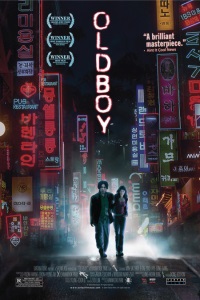 This was a movie that I learned existed when I got into listening to podcasts, I heard a lot about it and this one went on my shortlist of movies to see. It still took me awhile to actually watch it though. Something that is interesting is there is quite a bit of debate if this is horror or not. Before actually seeing this, I heard the arguments on both sides and I can see why some don’t think it is. Since that is all I review, you can guess where I lie and I'll get into that a bit later. The synopsis here is after being kidnapped and imprisoned for fifteen years, Oh Dae-su (Min-ski Choi), only to find that he must find his captor in five days.

To expand on what the synopsis states, we meet our main character of Dae-su while he’s at the police station. He’s really drunk and his friend of No Joo-hwan (Dae-han Ji) shows up to take him home. Once they leave, Joo-hwan uses a payphone to call his family. It is raining and we see a pair of angel wings in a paper bag. Dae-su had them on for a brief moment in the police station.

Things then take a turn. Dae-su is in a room with a steel door. There is a little hatch that is opened and he pleads with his captor. Food is put through and then closed. We then get to see Dae-su and the things that he does to stay sane. He tattoos a mark for each year he is there on his hand. He uses the television to help him keep time, the date, school at home and even church. There is a picture hanging that has the lines: ‘Laugh and the world laughs with you. Cry and you cry alone’. There is also something weird where he is knocked out periodically with gas. They then cut his hair and other upkeep that they can’t trust him with due the tools used.

There is a day where he is hypnotized and wakes up on a rooftop. I did forget to state that we started here with someone hanging over the edge, being held only by his tie while he has a dog. The person not in peril then stated he wants to tell his story. It turns out the one holding him up was actually Dae-su. He’s now free and trying to figure out who held him captive for these 15 years.

This leads him to a sushi restaurant where to meet Mi-do (Hye-jeong Kang). From what I gathered, Dae-su saw her on TV for a cooking show. She ends up taking Dae-su home with her when he passes out. She helps tend to wounds and the two of them have a sexual attraction. She aids him in trying to figure out what happened to him and who was behind it. The problem is that he doesn’t necessarily trust her or anyone around him. We do also keep seeing the character of Lee Woo-jin (Ji-Tae Yoo).

Dae-su is told that he has 5 days to figure it out, by July 5th, before all of the women in his life are killed, starting with Mi-do. While he was locked up he heard his wife was murdered and since he was missing, he’s the prime suspect. Because of everything, his daughter was adopted by a couple in Sweden. Or that is what he thinks happened with her.

Now I think that I should really address the elephant in the room to start my actual analysis. Is Oldboy a horror movie? It for sure for me falls into that adjunct category and there are really some dark elements as well. This movie is is really a revenge film and that actually plays out in more than one way. Lee wants revenge on Dae-su and he wants his revenge back on him as well. We get some action as there are wild sequences. There is drama, there is mystery and this is for sure a thriller. What I have left out is if this is a horror movie.

I do personally think there are quite a bit of the elements and some of that comes from what they present to us. Dae-su is held in this ‘cell’ for 15 years. When he released, he is told that he is now in a much larger, different type of prison. Reflecting on this is a beautiful yet demented thing. Dae-su is so stuck on learning the truth, he’s trapped. Revenge is also a terrifying thing that will cause you to lose your humanity, but that has already been stripped away by the torture of his original prison. Dae-su has to come to terms with what happened to him to get his revenge. There are a couple of scenes with some pretty graphic images. That doesn’t make it horror though. I do think that this falls into modern exploitation with the torture and the truth behind the sexual elements as well. The long game and the reveals are really dark with our main villain being scarred and perverse. What he pushes and forces Dae-su to do is pretty horrific.

I’ve done it in the past, but I don’t think I’m going to delve into a spoiler section. There really isn’t a need as I don’t think my analysis needs to present what the reveals are. I’ve been able to flesh out the tone of the movie without it. What I really like about this movie is the acting. Seeing the effects of everything that happen to Choi, I love how he plays the effects of his psychological damage. Being held in this room for 15 years without any real contact with anyone, it has some devastating repercussions. He doesn’t know why for that whole time he’s there. There is a smile he does that he tells himself to put on and it goes back to the saying on the wall in his room.

Yoo is the other side of what we get. The grudge he is holding and why is hard to fault him. What he does though is a bit over the top, but the effects of the event behind this has a similar effect to the ones done to Dae-su. Kang plays her role pretty well also. Her reveal was spoiled for me, but to be honest, it didn’t affect my viewing of the film. She plays her role well and we get to see her topless. That is something I won’t complain about. I’d say the rest of the cast rounded this out for what was needed as well.

Really the last thing that I wanted to go over would be the effects. We don’t get as much as I was expecting, but I’ll glad they went practical. There are some action sequences where Dae-su is fighting groups of guys and they don’t always look the greatest, but better than some I’ve seen. We get some torture scenes that look pretty realistic. There is one in particular with the claw of a hammer and teeth that made me cringe. There's another scene that plays with this that I liked. The blood in the movie looked good and the cinematography is solid. I did see this is based on a comic and I could tell that before confirming. It looks like they pulled certain scenes right off a page and brought them to life. It worked for me for sure.

So now with that said, I’m glad I can finally tick this off of my list. This is an interesting revenge film that has a story deeper than I was expecting. For the modern era, the Koreans know how to do the revenge movie for sure. I think that the acting from our three stars really helps to progress thing. The practical effects work for me. This clocks in at 2 hours, but I barely noticed that. It had my attention and I love piecing together the story as we go. Dae-su needs to remember and learn, just as we are as well. This is one I have a feeling my rating is going to go up. I can’t come in with a perfect score with this first viewing, but it is a great movie for sure. I’m interested in giving this a second viewing now that I know how it plays out for sure.