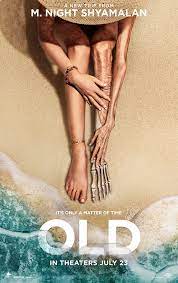 This was a movie that I caught a commercial for. Since I don’t watch trailers and realized this was a new M. Night Shyamalan movie, I knew that I would seek it out. This is one Jaime came with me to the theater to see as well. Aside from that, I came in blind just knowing what the title was and getting ideas from that. The synopsis is a family on a tropical holiday discovers that the secluded beach where they are relaxing for a few hours is somehow causing them to age rapidly, reducing their entire lives into a single day.

For this movie, we are in a tropical location. Guy (Gael García Bernal) along with his wife Prisca (Vicky Krieps) and their two children are on vacation. Their daughter is Maddox (Alexa Swinton) and son is Trent (Nolan River). She has a good singing voice, but a bit self-conscious and he has a thirst for knowledge. The family arrives at the resort they are staying at. The man running the place is played by Gustaf Hammarsten. He is aided by Madrid (Francesca Eastwood).

While there, we get to meet some of the other key people. Charles (Rufus Sewell) is a doctor that is there with his wife of Chrystal (Abbey Lee), his mother Agnes (Kathleen Chalfant) and daughter Kara. There is also a male nurse Jarin (Ken Leung) with his wife of Patricia (Nikki Amuka-Bird). She has issues with epilepsy. Trent and Maddox also meet the nephew of the resort manager Idlib (Kailen Jude).

Things aren’t going as well for this family as it seems. Prisca has a tumor. It is believed to be benign, but it is still stressful. Their marriage is struggling as well and they’re heading for a divorce. This really seems to the last time they’ll do something like this as a family.

The next day, the resort manager greets them at breakfast. He inquires what they plan on doing for the day and he suggests them going to a nearby secluded beach. He states he doesn’t tell everyone about it. The family agrees and they meet in the van. Also joining them is Charles and his family. It should be pointed out; they are driven there by Shyamalan himself.

When they arrive there, they realize they aren’t alone. The previous night we saw a man there with a woman. He is a famous rapper by the name of Mid-Sized Sedan (Aaron Pierre) that Maddox recognizes.  They soon realize there is something up with this beach. Patricia and Jarin join them. It is around then they learn that the woman Mid-Sized Sedan was with is found dead. Charles doesn’t trust him and holds him at knife point. It gets even weirder when all the children aged 5 years in a matter of a couple of hours. They aren’t the only ones getting older either.

That is where I’m going to leave my recap of the movie to get you up to speed without spoiling. Where I want to start is that I’m glad to see Shyamalan back on track for me. His last three movies have been solid. Not up to where he was earlier in his career, but that was a decent run there. Moving from there, this movie has an interesting premise. I’m a sucker for movies with time travel and this one is doing something a bit different. This beach is isolated from everything around it with rocks. For whatever reason, there is a natural phenomenon that is causing anything on it to age rapidly. I think it does well to explain why fingernails and hair isn’t growing older, it is just living cells. It also makes sense that children would show aging faster since we get to a certain look as an adult and we are there for a while. I’m on board with this.

Where I want to shift next would be how our characters are kept here. Any time they try to walk back through the rock path, they get dizzy and lightheaded. Anyone that tries to swim away runs into a similar issue. There is a comment about this beach and potentially being submerged underwear at some point. This is brought up as it is like trying to come up from under the water too fast. The pressure is too much and it has physical effects. These rocks surrounding them are high and whatever is causing this, is trapping them as well. I think this is a good enough explanation without giving too much for me.

The last part of the story that I want to discuss, but also trend lightly to avoid spoiling the movie. Trent notices that someone is watching them. Now if you know me, I’m a big fan of social commentary in my movies. This movie has a shift near the end to explain why things are being done here that feels a bit too heavy handed. I get the reasoning. It is something that makes me question as it is for the good of others. This feels like Shyamalan being a bit too much like Hitchcock by having a reveal followed by an information dump. I don’t hate it, but it also doesn’t work as well as I think he wanted.

That is enough for the story, so I’ll go over to the acting. I thought that Bernal and Krieps were fine. If I have any issues with their actions or things they do, it is with the writing. I should slide in here that it gets a bit awkward at times. I do have to blame Shyamalan here as I think he is trying to be too witty and too smart. Sewell is good. There is a reveal to his character as to why he is here that I liked. He plays such a good villain. Alex Wolff and Thomasin McKenzie play Trent and Maddox when they’re older. I thought they were both good. Lee, Amuka-Bird, Leung, Pierre, Eastwood and Hammarsten are all solid along with the rest of the cast. I did want to state it was interesting to see cameos by Embeth Davidtz and Emun Elliott as well. I won’t reveal who they are though.

I think the last parts to go into would be the cinematography, effects and soundtrack. For the former, it is good. I could tell watching this that it was a Shyamalan movie. He can craft his shots in interesting ways. There was one time that I think he went a bit too artistic with it, but I’m not going to hold it against the movie. As for the effects, I think they are solid for the most part. The framing helps here, especially when a reveal happens that people have gotten older. There are some subtle things done here that worked. There is a moment though with character where CGI was used that didn’t look good. I liked the idea, but not the execution per say. The soundtrack also worked and fit for what was needed.

So then in conclusion here, I’ll double down that I think Shyamalan is back on track. There is an interesting premise here and I think we are given just enough to explain it without going too far. I like seeing the struggle of our characters on this beach and how things play out. I will admit though, there is social commentary that feels forced in at the end that I didn’t love. The acting was solid across the board. Cinematography was well done and there was only a moment of CGI that didn’t sit well with me. For me, this movie is an above average movie overall.