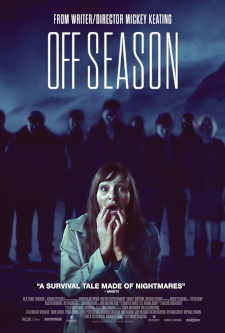 This is one of the earliest movies for 2022 that I learned about. It technically was making its festival round last year, making it officially a 2021 release for most purposes. For of us that didn’t catch it at one of these, it came out this year though. I’ve heard some good things from voices in podcasting so that also made it a movie I moved up my list.

The synopsis: after receiving a mysterious letter, a woman travels to a desolate island town and soon becomes trapped in a nightmare.

We get a story here that is told in six chapters and an epilogue. The movie starts with showing us documentary style or home movies of people enjoying the beach. Being that this movie takes place mostly on the island from the synopsis, we are seeing how good it can be. The movie then shifts to a desolate beach to set the tone of the reality here.

The movie then shifts us to Ava Aldrich (Melora Walters). She doesn’t want to go back somewhere and this stresses her out. It then shifts to her daughter. She is reading a letter from H. Gierson (voiced by Larry Fessenden). This letter is telling how her mother’s grave was vandalized. She must come at once to decide what to do. Coming with her is her boyfriend, George Darrow (Joe Swanberg).

They come over a bridge that rises. The man who runs it is played by Richard Brake. He warns the couple that he cannot let them in. The island is going to be closed off soon. Marie shows him the letter and tells him that they will be quick. He is leery, but lets them in. They arrive at the cemetery to assess the damage. The problem is that they cannot find H. Grierson. They look around for him and get separated. Marie encounters Miss Emily (April Linscott), an odd old woman who runs a flower store on Main Street. Marie also has a run in with others with white eyes that won’t respond to her.

Marie finds George and they go to a local bar to see anyone there knows where the caretaker is. They meet the locals, including Henry (Jeremy Gardner). He says odd things to Marie about he will be awake and will get her off the island if she needs it. She is creeped out though. George and Marie get back in the car and she reveals what her mother told her. This upsets him and he says they need to get off the island before it is too late. She agrees. The problem is that odd things happen and it strands them. We get more insight into Marie’s past as well as more about her mother. She didn’t want to come back, but her will said otherwise. Marie believes there’s dark forces pushing things into place. This is only the beginning of the nightmare.

That is where I want to leave my recap as well as giving a bit more back-story. I don’t want to go into spoilers as this movie gets wild. We are getting an interesting premise here that has a Lovecraftian vibe to it. It also has elements to the story that aren’t new, but I like how they are used with this film. Where I’ll start is the setting. This is on an island that closes over what I’m assuming is the fall until the spring. This creates tension from the moment our couple arrives. There is limited time, so when they look for H. Grierson and can’t find him, it just builds. Adding more to this are the odd townsfolk. They don’t seem to like outsiders and there is something off about them. Since this is Lovecraftian, I’m assuming they’re using ‘The Shadow Over Innsmouth’. This is also any movie where we have a small, isolated town as well.

What also helps is the bit of back-story elements we get throughout. We know that Ava was terrified. She convinced Marie to not let her be brought back. It seemed that she was dealing with dementia. Also, it is hard to overturn the will, especially when her mind was going like it was. There is an interesting scene where Marie gets into an argument with a couple of lawyers, Mr. Clayton (Jonathan Medina) and Ms. Gardner (Eliza Shin). There is a comment about if she fights this that should be considered a ‘problem child’. This isn’t explored beyond that, but I found it interesting that they are gaslighting her. We also subtly get things dealing with Henry, the fisher, and the relationship between Marie and George. Not everything plays into the movie overall, but it adds depth to help us connect more with the characters.

Now the last bit for the story I want to go over would be the darker, supernatural elements. I’m going to tread lightly as I don’t want to spoil things. Marie reveals that her mother believed there was a demon associated with this town. Ava told her there was a man who came from the sea in the past when the settlers of this place were struggling due to the storms that hit the area. They made a pact with him. George doesn’t buy it. He thinks the people here are odd, but that is it. I like how these elements get developed to the ultimate reveal.

The next element I want to go into would be the acting. I’m a big Donahue fan. She’s good here. I like her as our lead who doesn’t believe in the supernatural but starts to quickly into her time on the island. I think that develops in a realistic way. She was warned and what she was told fits. We have a solid cast around her. I like Swanberg who brings a bit of attitude to his role that worked. Brake is great in these unhinged type roles. I liked to see Gardner here and hearing the voice of Fessenden. I think this cast is solid to push Marie where she ends up.

Last things to go into would be the cinematography, effects and soundtrack. For the former, this is shot well. There are Silent Hill vibes here with this island. We don’t see a lot of people and it adds a creepy factor. Plus, we get mist that makes it more eerie. The cinematography is well done with building this atmosphere. I’ll pull in the soundtrack as well. It was funny that while watching this, my wife came down to say that the music was creepy. I agree with her and I like the element that it adds. The last thing would then be the effects. We don’t get a lot of them, but this isn’t necessarily that type of movie. What they do with eyes of people, making them white is unnerving to me. We also get something else in this movie that was great to see. It fits with elements that are given.

In conclusion, this is a movie that I heard good things about. What I knew ticked boxes and this movie lived up to that. We have an interesting set up with this isolated island. I like how it traps our characters there. There are Lovecraftian elements that make it even more eerie. The cinematography is good and the soundtrack is great in building the atmosphere. Donahue works so well as our lead with the rest of the cast pushing her to where she ends up. This is a solid movie that works in the realm that is building for me. I’d say that after this initial viewing, this is a good movie. I’m looking forward to revisiting before the end of year to see where I fall with a second viewing.