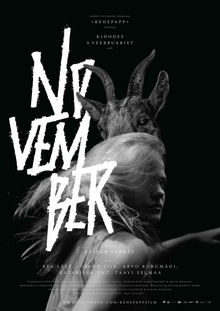 This was a film that I had heard about when it was making its festival rounds and it had me intrigued. I watched it as for my year end round up for my best of 2018 list. This was quite an interesting and odd film to say the least. The official synopsis is in a poor Estonian village, a group of peasants use magic and folk remedies to survive the winter, and a young woman tries to get a young man to love her.

For this one, it had such an odd narrative that it is hard to put into words. As the synopsis states, we are in rural village in Estonian. We kick off with an odd metal creature that flies through the air like a helicopter with a cow. It is after watching I realize, the creature is stealing this for its master. He is Rein (Arvo Kukumägi) and the creature is called a Kratt. He lives with his daughter, Liina (Rea Lest). These Kratts actually contain the soul of the person who is their master and they want to work. They also take on a personality all of their own.

The villagers are pagans and follows some odd beliefs. The Devil (Jaan Tooming) visits them and allows them to summon Kratts, but if theirs dies, he gets their soul. They actually hide their soul in them to prevent the soul from being stolen. They are also visited by the ghosts of their ancestors and even in their death; they worry about the items that are theirs. The problem though is every one in the village steals from everyone that they can.

Liina is in love with the only other boy her age, Hans (Jörgen Liik). He falls in love with a Baroness (Jette Loona Hermanis) from Germany as her and her father, Baron (Dieter Laser), move to the village. Liina’s love takes her to a Witch (Klara Eighorn) in order to try to get him to fall in love with her.

That is about all I can really say about the story without going into spoilers. What I can though is this is a film arthouse. It is very stylized. The look of the film is great. It is washed out which makes it look even bleaker. They are dirty and disheveled and you feel like they are living a rough life. The aspect of stealing from each other I thought was good. Everyone in the village knows each other, but there doesn’t seem to be any real trust. I also found interesting is that when someone is doing something nefarious, their skin looks so dirty it is almost black. When someone is doing something that is not so bad, their skin is white, showing the duality of the characters.

Going from that, we know winter is coming or almost already there. That also helps with the washed out look with snow and ice. What I’m really bringing up here is that they are worried about a plague coming through. It takes the form of a person or an animal, which I found interesting. Being they are pagan, this feels very similar to what Greeks or other cultures of the past would do when they don’t understand something. They also believe in magic to help make their lives better.

The editing for the film is somewhat difficult to talk about. The film runs about two hours long, but I wouldn’t necessarily say it drags. It isn’t really a slow burn either. We kind of just move through things and at times they really don’t seem to connect to each other. As someone who is interested in the story, this can bother me at times. For this film though, it didn’t really. I was so sucked in trying to figure out what was happening that I was intrigued. The ending is a bit abrupt, but for what happens in this film, I’m not surprised.

A film like this really needs to have a good story or good acting. Now from what I just said about how weird the story was, the acting really needed to carry it, which I think it did. Lest was solid in this film. I felt for her, because I have been in her place where I’ve really liked someone who didn’t reciprocate. You will do whatever you can to get their attention and that’s exactly what she does. It was sad, but a solid performance. Liik I also thought was good. Kukumägi was actually one of my favorite parts of the film and just the knowledge he has about what is happening around them. It was fun to see Laser, from The Human Centipede fame, even though he has a minor role. I’d say the rest of the cast round out the film for what was needed.

The effects for the film were quite interesting to me. They looked to be practical and if they weren’t, they were very well done CGI as it looked real. When you first see the Kratt move, I was wondering what I had gotten myself into. We get things like this throughout the film. I thought the effects were good to bring this to life. I have already touched on how the film was shot as it looked beautiful, despite where it is taking place.

Now with that said, this is a hard film to review, but I really enjoyed watching it. The film is in a world that I’ve never lived in being that it is in a tiny village where life is hard. It is a film full of pagan beliefs to explain how the world works and in a village where everyone is a crook. I thought the acting really brings this film to life along with how beautiful it is shot. The washed out look really helps to make you feel how bleak their lives are. The effects used looked good. The score of the film, though it didn’t stand out, definitely fits for what the film was going for and it fits the scenes. This film isn’t for everyone. It doesn’t have the most coherent narrative. I would recommend this film for those that like films full of allegories and are into arthouse. I personally do and I think this is a good film overall.