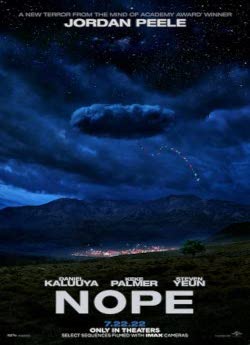 This was a film I was excited for 2022 releases. Since I avoid trailers, I just saw the poster and that was it. It was enough for know that it was the new Jordan Peele film. I couldn’t catch this during its opening week, but I did avoid spoilers. The buzz that I heard was mostly positive so that helped. Jaime also came to see this with me in the theater.

Synopsis: the residents of a lonely gulch in inland California bear witness to an uncanny and chilling discovery.

For this movie, we start with a sitcom. We will learn this is from the 1990s. It had a gimmick of having a family living with a chimpanzee. The problem is that it goes crazy, killing most everyone on the show. Shifting to present day, we follow OJ Haywood (Daniel Kaluuya). We learn that his family is Hollywood royalty. Little known fact is that his ancestor was in the first motion picture which was a Black man on a horse. He works on a ranch where they train horses for movies. His father is Otis Haywood Sr. (Keith David). Tragedy strikes the family with an unexplained event.

There is then a time jump. OJ brings a horse by the name of Lucky to a commercial shoot. What I like here is that we see he’s quiet. I wouldn’t necessarily say he’s shy, but he isn’t a fan of talking in front of a large group of people. He leaves that to his sister, Emerald (Keke Palmer). She is late, but also the life of a room.

Things don’t go as planned and the commercial decides to go a different direction. This forces OJ to sell this horse to a nearby tourist attraction. It is run by Ricky ‘Jupe’ Park (Steven Yuen). OJ’s plan is to loan it, but we see that might be what his counterpart is doing. What is interesting here is that Jupe was the boy on the television show where the chimp went crazy. He tells all about it to Emerald. We can see that during this, OJ just wants to do business and get out of there.

Back on their farm, we see that the sibling’s relationship is strained. She is helping when she can, but her heart isn’t in it. OJ is making tough decisions to save the business. Things all change when another of their horses get out and something happens. I’m not going to spoil it, but what I will say is that what happens is otherworldly. Our duo sees a chance to make money. What they go through is going to be much more life changing.

That is where I’ll leave my recap for this movie since I don’t want to give away what happens. What I’ve given should give you an idea of our characters as well. Where I want to start is something I’ve already brought up and that is the writer/director of Peele. I’m not trying to play my hand too early, but he is three for three for me with his movies. This is my least favorite, but that isn’t a slight. I think that Get Out is a masterpiece and Us isn’t too far behind. What he did here is probably the most approachable though and might have more mainstream appeal than Us.

Where I’ll go then is the entity in this movie. I’m assuming most everyone who is reading this knows that it is aliens. That is the extent of what I’ll say outside of that I’ve heard some say that the title is an acronym. I knew this coming in and supposedly it means Not of Planet Earth. Regardless, I like that despite leaning into science fiction, Peele was able to ground this. We get a glimpse of this sitcom to start before meeting our main family. This is an encounter movie without going too far over your head with the science there. I like that it plays with conventions as well. I’ve heard a podcast compare Peele to M. Night Shyamalan with this being the former’s Signs. What is funny there is they share subject matter. There is a section of this that has similar scenes as well. We also have another character, Angel Torres (Brandon Perea), point out that the Pentagon confirmed in real life that there are extraterrestrials. That gets incorporated here. This goes in a different direction that I love. The poster also makes sense as you watch this.

I think now I want to start delving a bit under the surface. Where I want to start is with this sitcom I’ve brought up. There is a tragedy here and Jaime questioned by it was here. Something I heard on another podcast was that this event shaped Ricky. It makes him overconfident and believe that he knows how to deal with what we get here. It fits in with something that happens later in his life. I took it in a different direction. This explores the idea of predators. What I told Jaime was that the chimp that lost its mind is like a predator. Looking them in the eye is a form of a challenge to them. This comes into play later. There is also a director, Antlers Holst (Michael Wincott), who we see editing footage of predators attacking. He has insight into them which I liked.

Since I’m about animals, I’ll go over to some social commentary. I think this movie is pointing out how animals are treated past and present in the film industry. Today it is much better, I will say that. Part of the explanation I have is that the chimp was at the end of what it could take so it attacked. There is a sad part for me that OJ is selling the horses that don’t get the jobs in the industry. I’d say there’s also a commentary on capitalism that when you no longer are useful, you are sold off.  It is quite sad to be honest.

The last bit of commentary before I move on would also deal with a subject that I know is important to Peele. It is the historical significance of Black people in the film industry. The moving picture they show is real. That is actual first one made and exhibited. The movie takes liberties with who that person is from what I’m guessing. I can work with that regardless. Peele is doing a great job at making movies with black leads and helping to solidify their place in modern cinema. I’m there for that.

Where I’ll then go is to the acting. Coming into this, I heard how good Palmer was. I will agree that she plays the character of Emerald in a quirky way. It works to play off Kaluuya as her quieter brother. I personally think that he’s the better performance. He does so much without talking and just has a presence. Palmer was a bit too manic, but I won’t take anything away from her. I thought that Perea was good in support. Wincott, Yeun, David and Oz Perkins were as well. The acting was good across the board. They all bring their characters to life.

That will then bring me to the filmmaking aspects. Where I want to start here would be with the cinematography. This is Peele’s biggest budget today and it looks great. The cinematography of the gulch this takes place in is amazing. What he does there is just beautiful. Shifting this to the effects, I thought they were also good. There is CGI here, but I couldn’t see issues with it. I’m also sure there are practical ones mixed in which were solid. The other part would be the soundtrack. This is something else that Peele does masterfully well. What sticks out most is the use of Sunglasses at Night by Corey Hart. He slows it down and makes it eerie. The sound design is great as well. We can hear screams at different times that are unnerving. I think with this is what puts it in the horror genre for me. There are people question its place there, but my anxiety was up throughout most of this movie. I think there is enough to include it in horror.

In conclusion, even though this is my least favorite of Peele’s movies, which isn’t a slight, this is still good. We get a story we’ve seen before, but he does something different with it. The acting is good across the board. I like what he did with the cinematography and the sound design as well as musical selections. The CGI we get works. I also like the commentary, even though this is the lightest of his movies. Peele is just an expert writer and makes interesting movies. I’m looking forward to revisiting before my year end roundup.