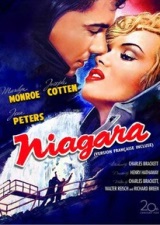 This film begins with a man looking up at Niagara Falls, he is played by Joseph Cotten. He returns back to the cabins that are on the Canadian side. We see inside of a cabin and there is a woman smoking, she is played by Marilyn Monroe. She hears her husband entering and then pretends to be asleep.

We then meet another couple as they are entering Canada. They are played by Jean Peters and Max Showalter. We learn that they are married and have been for awhile, but they haven’t been on a proper honeymoon. They are staying at the same cabins, but when they arrive, they learn from the caretaker, played by Russell Collins, that their cabin is still occupied.

Monroe hears this and she exits. She apologizes and says that her husband hasn’t been feeling well. He has been seeking psychiatric help from things that happened to him during the war. Peters and Showalter agree to take another cabin that isn’t as nice, because they feel bad. Showalter tries to call his boss, who works in the home office, but he isn’t in until Monday.

The couple then sees Monroe exit her cabin. She states that she is going to go do some shopping. Peters and Showalter check out Niagara Falls and while Peters is posing for a picture, she sees what Monroe is really doing. She is kissing another man, who is played by Richard Allan.

Later that night, we see Monroe requests a song and joins Peters and Showalter. Cotten comes out and breaks the record, stating that he hates that song. We learn that Cotten knows that she has cheated on him in the past and this song had something to do with it. It infuriates him. Peters goes in to check on Cotten and helps tend to his hand. Showalter comes in later. Cotten tells him that he has a great wife and that he needs to cherish her. He then freaks out again.

The following day, Monroe and Cotten are talking about going to continue their life in Chicago. Monroe calls her lover and they are supposed to meet that day. Cotten catches on to it and he freaks out. Monroe leaves and he follows her.

At the place that they are supposed to meet, Monroe sees Allan and Cotten also shows up. Allan whistles the song that Monroe loves. Allan and Cotten get on to the elevator. There is then talk about a body being found. Monroe goes to identify who the body is and then passes out.

Who is the body that she sees? Peters and Showalter meet with the inspector, played by Denis O’Dea. He is trying to gather more information and he was having them help out with Monroe in her time of need before going unconscious.

Peters and Showalter are then given the room that belonged to Monroe and Cotten. Showalter is out, but his boss shows up, played by Don Wilson. He is accompanied by his wife, played by Lurene Tuttle. It is decided they will come back when Showalter returns.

Peters goes to take a nap and is awoken. She finds Cotten in her room. Is it really him or is she dreaming? Who is the body that was found? Is Monroe going to be okay? If Cotten survived, what is his next step?

This film is pretty interesting to me. This is a fringe film noir, which I really like. I want to start off that the story is an interesting concept. Monroe is gorgeous, which is a given. Her character is horrible in that she is cheating on her husband, who is a solid actor in Cotten. He is having emotional issues that stem from his time in the military. It makes you wonder if he wasn’t having that, if she would do the same things to him. She also portrays the femme fatale very well. With that said, Peters isn’t bad looking herself. The acting was good across the board and I like the story. I wasn’t sure who was going to be the person who died.

The issue I did have with the film is that what happens to Monroe during the climax. It is possible, as the person is mentally unstable. Then again this could the straw that broke the camel’s back. The film also could probably have done with a little bit more of a sub-plot, as the film has a lower running time. I also don’t feel the story is overly deep, which it could have benefited from.

I am adding this film to the horror film research due to the fact that we have a murder that is committed. The first death is a self-defense, but then Monroe is murdered out of revenge, which is a horror film element. Also Cotten’s mental state is something that is brought into question. He has a psychotic break that would qualify it as a horror film as well.

Now with that said, I would recommend this film, especially if you like film noir. I would say that this film is on the fringe of that genre. This film has good acting across the board. Monroe is beautiful and Peters is also easy on the eyes. Cotten is solid in this role. The story is interesting, but could have benefited from having a sub-plot or two to deepen it. I will point out though that this film from the 1950s, so keep that in mind if that would be an issue. This film is really worth a viewing.