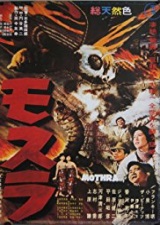 This film begins during a typhoon hitting the Pacific Ocean near Japan. We learn that there is a ship that is caught in it and the closest island for them to go to is Infant Island. The problem with this is that nuclear tests were done there. The ship runs aground on the island.

A rescue mission is run and four men are saved. They are taken to a hospital and there is a lot of press outside. They are prevented from entering. The doctor in charge is Ken Uehara. The men do not have any radiation poisoning and they are shocked. Uehara asks them how this is possible. We learn that there were natives there that gave them some kind of red drink that prevented it. A woman produces a camera and we learn that two members of the press got in. The woman is played by Kyôko Kagawa and the reporter by Furankî Sakai.

It is decided that a scientific expedition will take place to this island. Uehara is going on it as well as another doctor, played by Hiroshi Koizumi. Kagawa was supposed to get a picture of Koizumi, but she failed. Sakai and Kagawa go to meet with him. We learn that he is actually a nice and friendly. He just despises getting his picture taken.

This mission is headed up by Jerry Itô. Itô is from Rolisican, which I learned is a fictional country that is a combination of the United States and Soviet Union. This mission is a join venture between this country and Japan. Itô has complete control though.

As their ship is leaving for Infant Island, Sakai sneaks aboard. He is allowed to stay, but he is not allowed to report on what is found. He is just there as a security guard.

Once on the island, we realize that it is unaffected by the radiation. It is covered with lush green vegetation. They begin to explore. Koizumi came along because he is a linguist and expert on Polynesian culture and writing. He finds a strange inscription on a cave wall. He also gets attacked a blood-sucking plant and hits his alarm. When he does, two tiny twin beauties appear, they are played by Yumi and Emi Itô. He passes out though.

When he comes around he’s back on the ship, he tells everyone what he saw. They don’t believe him though, thinking he was hallucinating. The next day they go back to the island and he hits his alarm again. The twins appear and Jerry Itô grabs them. The natives reveal themselves and they look ready for a fight. Jerry Itô is finally convinced to let them go. This ends their expedition.

Koizumi shows the inscription he found to Sakai and tells him that is about a monster called Mothra. They do not know much other than that. Jerry Itô returns to the island with a small group and they capture the twins. They also kill the natives that attack them. The natives then begin to pray and start the ritual for Mothra.

Jerry Itô creates a show that displays the twins as they sing. He calls them fairies. Sakai, Koizumi and Kagawa go to see him and try to convince him to let them go, telling him that it’s not right. Jerry Itô tells them that they are not people, but his property. He does allow them to speak with the twins.

The twin fairies tell them that they are in danger. That Mothra will come to save them. They then try to think of a way to free them.

A giant egg hatches and a large caterpillar begins to swim across the ocean toward Tokyo. It destroys a ship that gets in its way as well. Jerry Itô is warned to let the twins go, but he rejects them. His government backs him up as well.

We learn that the twins have a telepathic link with Mothra, so it knows where they are. Everything is being done to block this, but Mothra attacks Japan. Everyone thinks they have it beat when it forms a cocoon and they set it on fire with atomic heat rays. At this time Jerry Itô flees back to his country. Will he get away with them or will Mothra hatch into its true form? If it does, can it be stopped?

I have to lead off by saying that this is an important film for the fact that this is the first appearance of Mothra. It is hard to be upset with this monster, because it is trying to save the twins. This is one of the rare monster films where the bad guy is a human and the monster is trying to do the right thing, but it is destroying the city in the process. I think the acting is good. Sakai brings a comedic element to it and Jerry Itô is really good as the villain. The monster scenes are pretty good for what they could do at the time as well. The twins are also cute and their songs are as well. I also felt bad for them being held in captivity for most of the film and being exploited.

My biggest problem with this film is that Mothra doesn’t appear until almost an hour in and then doesn’t become an actual moth until there is about 20 minutes left. I know these monster films try to build a foundation of a story before getting into what the film is about, but that is not really what people want to see. I also felt the scenes against Mothra where it taking a ton of bullets, rockets, missiles and none of it phases it, it just continues to look for the twins. I just felt it would get annoyed more and fight back some. I also didn’t like the ‘atomic heat rays’, because this is a fictional weapon even for today. This broke the realism for me. I also wasn’t a big fan of the ending either. I don’t see how the bells resembled what happens on the island.

With that said though, I liked this film. As stated, this one is important to the Godzilla series as Mothra plays an important role and this is the first film that it appears. The acting is good, the story is at least interesting and Mothra looks good for the time this film as made. I will say that this film is from Japan, but there is an American version. The problem is that you have to watch it dubbed so not all the words line up with their lips or you have to watch the Japanese version with subtitles. I would recommend this film if you like the old giant monster movies.