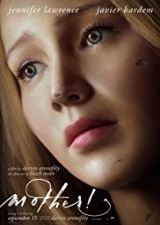 This film begins showing a woman on fire. We then see Javier Bardem put a crystal in a pedestal. The house then fixes itself as it looks to be either in disrepair or has been burned. It then ends up in the bedroom where a woman wakes up; she is played by Jennifer Lawrence. She goes looking for her husband. She opens the front door, then Bardem comes up from behind her.

It turns out that Bardem is a famous writer. He is struggling though and been unable to write. His house was destroyed in a fire and Lawrence has fixed it up herself to make it look like it was before the tragedy. She touches the wall and can feel the heart of it. She absolutely loves Bardem and will do whatever she can to make him happy.

That night they are interrupted by a doctor, played by Ed Harris. He thinks the place is a bed and breakfast. Lawrence is leery of him, but Bardem takes a liking to the guy, offering for him to stay the night. Harris has a bad cough and drinks some kind of liquor. Bardem joins him. Lawrence makes up a bed and goes to sleep. When Bardem doesn’t join her, she finds that Harris is sick and throwing up. Bardem has her leave the room and she hides Harris’ lighter by pushing it back off the stand it is on.

The following morning when Lawrence is making breakfast, there is the doorbell. It is Harris’ wife, played by Michelle Pfeiffer. She is there to stay with him. It is then revealed that Harris is dying and that he came there to meet the writer that changed his life, Bardem. Things get uncomfortable when Pfeiffer starts to make herself at home and ask some questions that are too personal. Lawrence also notices there is a weird wall by the furnace as well.

Making matters even worse, Pfeiffer and Harris go to touch the crystal that Bardem is in love with and it breaks. Lawrence goes to kick them out while Bardem boards up his study. Before they leave, Brian Gleeson shows up at the house. Following behind him is his older brother, Domhnall Gleeson. Domhnall is upset that he is being written out of the will and the two brothers get into a fight, with Domhnall injuring his brother too where he might not make it. Bardem leaves with the family to get him to the hospital.

While they are gone, Lawrence cleans up the blood. It has soaked into the floorboards below it and leaked into the basement. It is to the point that the wood falls apart. Lawrence goes down into the basement to see that the blood has exposed a door in the weird wall. She uses a wrench to open it to find a room with a giant vat of something in it.

The boy ends up dying and Bardem returns home. A party is being thrown there in honor of Brian Gleeson. Harris and Pfeiffer as well as other friends and family show up. Bardem is all for the party, but Lawrence is not as they are not listening to her. When her sink and its counter are broken she flips out. Bardem then ends the party. During this she also feels that the heart of the house has died a little bit.

That night they finally make love and Lawrence becomes pregnant. With everything that has happened, Bardem is able to write again and it is the most beautiful thing that he has ever written. The problem with it though is that it starts a whole turn of events that lead down a path that no one can stop.

Can Lawrence keep her husband and this idyllic life? Or will Bardem need those around him more than he needs her? What was the crystal that was broken? What did it symbolize?

Now it took me a whole day before I could write this review, because I felt that I needed to reflect on what I saw. First I will say that director Darren Aronofsky can create the most beautiful and haunting films that are out there. This film tackles so many issues. Bardem is a man that needs the fame; he needs the love of everyone around him in order to be happy. In order to obtain this though, he also needs the unconditional love of Lawrence. All she asks of him is to be there with her, but he can’t do that. This film also looks at the issues of cults or how people can be easily influenced by the ideals of them. There is also imaginary of governments stepping in when ideals like a cult are too strong. I have to say that I just loved how everything played out and the ending was amazing.

The acting of this film was superb and that is really what is most important. Lawrence was amazing in this role. She has to deal with wanting what is best for her and her family, while her husband, Bardem, wants to be beloved. She gives love to him unconditionally and supports him, to the point where it ruins everything she worked for. Both of them did an amazing job in their roles. Harris and Pfeiffer were great in the time they are on film and their characters were also interesting. I thought the rest of the cast did a solid job to round out the craziness of this film.

As I’ve stated, this film is shot beautifully. For the most part are close-ups of Lawrence’s face and we even get extreme close-ups. We follow her through everything that is going on. As the house that she has worked so hard on falls apart, the scenes reflect that and even showing the heart of the love that Lawrence has. I thought the editing of this film was something that was tough, but very well done. We never get a concept of time and during the climax, things change constantly. I thought the film did a great job at portraying that, but never taking me out of it. The score of the film was amazing as well. It fit perfectly and blew me away with it building tension.

Now with that said, I would recommend seeing this film. The film doesn’t have the most coherent story, but it is not that type of film. It is carried by the acting and it is really an allegory touching on a lot of different topics. It is shot beautifully. The effects are mostly CGI, but they look wonderful. The editing of the film is amazing and the score is as well. The horror of this film comes during the climax and it has some crazy things that happen. I wouldn’t recommend this to everyone as this is more an artsy film. If this sounds interesting and you are into those types of films, give it a viewing. I felt this film was amazing and I believe my rating will come up even higher after another viewing.