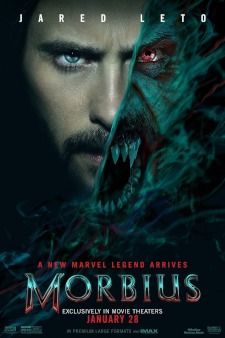 This is a movie that I was intrigued by. I knew of this character from the Marvel comics. This would have been when I was in elementary school when I was collecting Spider-Man ones. If memory serves, he would be facing off against a villain named Kane and Morbius made an appearance. I completely forgot about this until I saw a bit of the trailer for this movie. It did interest me, knowing that we were getting a comic book movie that was shifting into the horror genre. The synopsis then for this movie is biochemist Michael Morbius (Jared Leto) tries to cure himself of a rare blood disease, but he inadvertently infects himself with a form of vampirism instead.

For this movie, we start in South America. I believe it is Costa Rica. The area had the Spanish name for death, but since I saw this in the theater, I didn’t write it down. We get to meet our doctor here of Morbius as he is leading a team. He has this high-tech trap and he is trying to capture a special type of bat to this area. We learn these are ones can kill larger animals. I like that we are introduced here that Morbius has a physical ailment that he needs to walk with crutches.

We then shift 25 years into the past. We are in a hospital in Greece. Michael is a boy. The doctor that is trying to help him is Emil Nicholas (Jared Harris). Another boy is brought in and Michael goes about calling him Milo, due to them not staying there long. His real name is Loxias Crown. The two of them hit it off. They both have a genetic disorder that causes them to need what the young Michael calls an ‘oil change’ three times a day. We also see that Michael is brilliant as he saves Milo’s life, much to the amazement of Dr. Nicholas.

In the present, Morbius is a brilliant biochemist. He won an award for his research in Sweden. We also see that he doesn’t care about things like this though, to the point where he offends them. Working with him at a special hospital that also houses his laboratory is Martine Bancroft (Adria Arjona). She reveals that she knows his password and found his research. It is not only unethical, but illegal. He is using bat DNA to try to fix his own genetics. His experiment works in a lab mouse, so he is going to use it on himself.

I should also point out here that Milo has moved to New York City as well. The two of them spend time together where Dr. Nicholas is helping him. Milo is helping to fund Morbius’ experiments in hopes he can save them both.

Things then take a turn when the experiment works. There is a side effect that turns Morbius into a vampire. He has bat like features when he is the creature. Morbius contains his hunger with a synthetic blood he created. The problem is that the more he uses it, the less it staves off the hunger. He is against the clock. There is another complication when Milo gets his hands on this experiment as well. Milo doesn’t have the same self-control that his friend does. Two federal agents are also on to them, Simon Stroud (Tyrese Gibson) and Rodriguez (Al Madrigal). This puts the city at risk as Morbius tries to save himself and his friend before it is too late.

That is where I’m going to leave my recap here. I might have spoiled something here if you aren’t familiar with Morbius and his foes. What I will say is that the movie reveals this early on. I don’t think it ruins the movie knowing this information either. When I was watching this, I knew that having Smith in this role of Milo that he would be important. Since I’m not up on the lore of Morbius, I wasn’t sure who his villain would be. One of the bright spots is what the movie does with the emotional aspect for that. It isn’t anything new though, especially for these types of movies. I am forgiving and can go with it as this is a common concept for comic book adaptations.

For the positives, I was glad to see another try doing a comic book adaptation in the horror vein. Morbius is a vampire. From what I remember, he’s an anti-hero as well. I didn’t delve too much into him and I still don’t know a lot. We are getting an origin story here for the most part. He can’t control his abilities or his thirst. This is strategic that the first people he attacks are shady characters. I did like what they do with this experiment. They go out into international waters on a vessel. He also has mercenaries who aren’t the nicest people protecting him. Using characters like this here is strategic as we don’t like or connect with them.

I did want to shift slightly as the ship they’re on is called Murnau. This is a reference to F.W. Murnau who directed the vampire film, Nosferatu. Without even realizing this, I wore my shirt from this classic. If I do have a negative though with all of this, they are tame with the horror elements. Part of this is going for that PG-13 rating. I’m not going to complain too much, but they could have gone darker.

Since I’ve already brought up negatives, that is where I’ll go next. I’m not sure what their plan is with this movie. The villain of Morbius and how that plays out feels like it should be a sequel. I’m sure they didn’t know if this would do well and from what I’m hearing, this movie isn’t, so I’m not sure if we will get this character back. It almost feels like this movie should have had Morbius being more of anti-hero. Have the authorities coming after him and focus on him as a character. The villain we have here feels forced and bit a rushed.

I won’t go into details about this, but I also don’t necessarily like that they are pushing this into the Marvel Cinematic Universe. I can’t blame them. There is so much money there. I don’t mind the idea of Morbius being a part of it. What I will go back to though is that maybe give him a movie where we truly get to learn about him. I’ve heard rumors that Marvel is going to do their own Blade movie. I would have liked to see them go into a darker side of the MCU first before bringing him in with other super-heroes or villains. MCU is all about the long game and this being in conjunction with them just feels like Columbia is forcing to get that payday.

That should be enough for the story so I’ll go over to the acting. I thought our four leads are solid. Leto brings a bit of snark to Morbius that I appreciate it. If anything, we get that in the beginning and it goes away from it as the movie progresses. I wanted more of him personally. Smith is good as Milo. I like the change in his character as well. We feel it there from the beginning, he just needs the strength. Arjona is good as the voice of reason for Morbius. He ignores though, of course. I liked Harris, but he’s another one that I wanted more of. He is such a solid actor. Gibson is fine along with Madrigal. It is interesting that the former isn’t playing the comedic role where his counterpart is. Different from what I’m used to for sure. Other than that, the rest of the cast was fine for rounding this out for what was needed.

This will then take me to the effects, cinematography and the soundtrack. For the former, this is a CGI fest. I like the look of Morbius. His vampire is bat-like. There are also vibes of Nosferatu there. I would have liked a bit more practical effects as this all seemed to be CGI. The use of the bat sonar stuff is fine. Again, this was done with computers. I get why, but I don’t love it overall. The cinematography was also fine. They go a bit too far with some of it, but they’re also doing it to showcase Morbius’ abilities. Other than that, the soundtrack fit the movie for what was needed.

In conclusion here, this is a movie that I came in with low expectations. Trying to combine horror elements with a comic book film interests me, but I still have not seen one that does it well since something like Blade 2. Morbius is an interesting character so that does keep me invested a bit. The acting here is solid enough, but I wanted more of Leto and Harris. Doing a bit more with practical effects would help, but they use more CGI. The cinematography left a bit to be desired. This feels more like they’re doing an origin story for Batman; I did want to say that. Despite my expectations, this movie was disappointing. I’d say this is over average. It is serviceable, but they could do more.