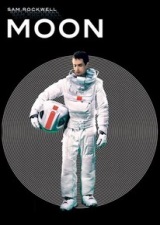 This film begins giving background information about Earth. Mankind were using bad fuels and a clean source was found. We have fusion power and we use the moon to get the fuel for it. We have astronauts up there that work on 3 year contracts to recover it and send it down to Earth.

That takes us to the main character, Sam Rockwell, who is up there right now. He is alone and works with a robot that is voiced by Kevin Spacey. He manages the machines that recover the fuel and then when they are full he sends them to Earth. He gets video messages from his wife that shows his daughter, but the com-link is down so it takes longer for the messages to get there. Same goes with the Lunar Company he works for.

Early on we see the effects of Rockwell being up there so long alone. He has begun talking to himself and hallucinating. While he is putting hot water in a cup, he sees a woman sitting on his chair and he burns himself. Later on while he driving his rover like he does daily, he finds the same woman behind the machine collecting fuel. He crashes.

He wakes up in the infirmary after what has happened. Spacey tells him there was a crash and that he is not allowed to leave the compound. Rockwell walks in on a conversation between Spacey and men from the company, when the link is supposed to be down. He gets smart and finds a way to get Spacey to let him leave and finds where he crashed. Much to his horror, he finds himself there. He brings the body back.

There are now two Rockwell’s and they must find the truth. Which one is the real Rockwell? Is there really two there? Or is Rockwell going crazy and losing his mind?

This movie is very good to me. I love the surreal feeling that you don’t know what is going on. You want to believe what you see on the screen, but since Rockwell is steadily slipping into madness you aren’t sure if what you see is real or if we are seeing what he is seeing. I’m a big fan of films like this. This is also why I consider this film to be horror. We are witnessing this man’s descent into madness.

With that said, this film’s story isn’t really that deep, but this really shows how good of an actor Rockwell truly is. There are 3 other actors or so who help drive the story, but they don’t have much time on screen. It is just Rockwell with Spacey’s voice and it is truly great to watch.

I would recommend this film. It isn’t long so you don’t have to invest a lot of time, but the performance of Rockwell is worth it. The movie is kind of confusing, but it does resolve itself so you don’t have to worry there. It is fun to see what you think is real and what isn’t and then see the truth. Give this one a chance.