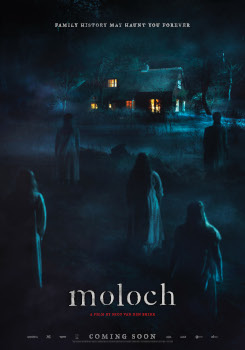 This is a movie that I saw popped up on Shudder. It went on my list of ones to check out for my year-end list. I heard good things from podcasters regarding this one as well. The week that I saw it was one where nothing new was coming to the theater so I made this a Featured Review for Journey with a Cinephile: A Horror Movie Podcast.

Synopsis: Betriek (Sallie Harmsen) lives at the edge of a peat bog in the North of the Netherlands. When she and her family are attacked by a random stranger one night, Betriek sets out to find an explanation. The more she digs, the more she becomes convinced that she is being hunted by something ancient.

We start back in 1991. There is a house in the fog. We see similar family photographs on the wall. It then shifts to a little girl in a closet. She is feeding a mouse, trying to get it to come out of its hole in the wall. There is then screaming and blood leaking through the boards above.

The movie then shifts to present. Betriek is woken up by a man she is in bed with. Her phone is ringing, but she is ignoring it. We learn that she plays violin and records herself on computer. The caller is her mother, Elske (Anneke Blok). Betriek forgot to pick up her daughter from school so she did. Betriek’s daughter is Hanna (Noor van der Velden). The good thing is that they both live at home with Elske and Ton (Ad van Kempen). He is the grandfather.

There is a discovery in a nearby moor. A person that goes by ‘Bagman’ with his real name being Radu (Edon Rizanolli) is the one that found it. He was digging and uncovered a body. I should point out that he’s known and a bit off. This causes a research team to set up here. This is a peatbog so the body was well-preserved. Leading this team is Jonas (Alexandre Willaume). With him is Sonja (Markoesa Hamer). I got the vibes that these two had a fling at one point, but that has ended.

This expedition is next to Betriek and her family’s estate. As the synopsis said, there is a night where a member of the team attacks the family. He puts a knife in the mouth of Elske, before Betriek hits him in the back of the head. This causes Ton to put up a trail camera. We will also learn that the little girl in the start was Betriek. This family knows tragedy and things seem to be coming full circle. Jonas befriends her and learns about the lore of this area. There is a pagan god named Moloch that requires a sacrifice. Jonas doesn’t believe, but there seems to be a cult in the area that does. That is just part of the nightmare as well as putting things into motion.

That is where I’ll leave my recap and introduction of characters that are important. I didn’t want to go into spoilers either. Where I want to start is that I’m a sucker for movies that have a cult in them. What is interesting here is that we go a long stretch without knowing that is the case. I don’t think this is a spoiler as I came in knowing that. The poster does signify it as well. If anything, it made me wonder what the things we are seeing and how they were going to connect. I will warn you; this is a slow burn. It is one that I think is worth the wait, but you need to know that coming in.

Where I’ll then go would be the lore of this entity known as Moloch. I love how we get introduced to this. I’ve already said that this area worships or at the least, honors it. There is a school play that Hanna is in that is telling the events of Feike. This is a sad and tragic story that is in line with the fairy tales that we grew up with. This is edited with Sonja reading online about it to Jonas and the rest of the team. I loved doing this as it makes for an interesting combination of showing and telling that worked. How this connects with the bodies being found in the moors and the events of Betriek’s past is also quite interesting to fit it all together. When it was revealed, my jaw dropped and my score jumped. That is all I’ll say as it is good writing.

Something else that I thought was interesting here is with something that Betriek says. She tells Jonas of a family curse. We saw part of the events in the beginning and that gets explained further. Betriek is bitter with life over something that happened to her husband, leaving her and her daughter to move in with her parents. There is more to it than that, but that goes into spoilers. I like this idea of family curses. Jonas laughs it off, but the deeper he gets into things and seeing events play out, she might not be completely wrong.

That is enough for the story so I’ll go to the acting. The performance from Harmsen as our lead is good. She has a good look about her in that she’s attractive, but they also do well with making her look forlorn. You can see and feel that life is weighing on her. I feel bad for sure. That sets the stage to where things end up. Blok is good as the mother along with van Kempen as the father. I like Willaume as our male ‘lead’. He takes a bit of a backseat as this is Betriek’s tale. We are almost in his position though to figure things out. Other than that, I’d say that Hamer along with the rest are good. Van der Velden was good in her feature film debut as the daughter as well. There wasn’t a bad performance in my opinion.

All that is left would be with the filmmaking. It is interesting is that while writing this, I heard Duncan from the Podcast Under the Stairs talk about this. He said that it felt like it ran a bit long, but there’s nothing he could cut. I’m with him. I felt my attention waning during the second act. As things connect, it pulls me in and I loved where it went. There isn’t anything that I could cut though, it is just deliberately paced. The cinematography is good. They do well with focus, especially since we get many shots of people being outside that we see through windows. This terrifies me so it was effective here. I like what they do with the effects. With how this is shot, the soundtrack adds to the tension as well as just the creepy vibe in general. This is well-made in my opinion.

In conclusion, this is a solid movie. This is one that if you pay attention to things, it pays off in the end which is good writing. I love the lore that they introduction and how it fits in with this ‘curse’ on the family. The acting is good. Harmsen and Willaume lead the way, but there isn’t a bad performance. This is well-made on top of that. What can be a draw back is that the pacing is a bit slow. It is worth it though to where this ends up. I rather enjoyed this quite a bit. Be warned that this is from the Netherlands, so I watched it with subtitles on. There is some English spoken as well.