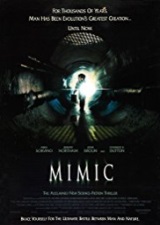 This film was one that I remember seeing when it first hit the movie channels. We actually might have ordered this one if my memory serves actually. This is actually one I would also put on as it seemed to play a lot when I was growing up. It came out before I knew who Guillermo del Toro was and had to be the first of his film I ever saw. The synopsis here is three years ago, entomologist Dr. Susan Tyler (Mira Sorvino) genetically created an insect to kill cockroaches carrying a virulent disease. Now, the insects are out to destroy their only predator, mankind.

We start with learning there’s an epidemic in New York City that is killing mostly children. A newspaper informs us that at least 1,000 have already died from it. We see a hospital room full of children in beds and sheets covering them to keep them quarantined. There is a CDC investigator deputy Dr. Peter Mann (Jeremy Northam) who is showing this to Dr. Tyler. It is learned that the spread of this disease is by cockroaches. They create a new insect that will kill the cockroaches, preventing the spread of the disease any farther and this mutant insect is supposed to die out after a lifecycle.

The film then shifts three years later. The disease has been wiped out, Peter and Susan are heroes and they are now married. Susan is leery, as they did not spend enough time in the laboratory to ensure that no problems could arise from this insect they created. Peter tries to convince her that everything is fine. We do see a colleague of Susan, Dr. Gates (F. Murray Abraham) who is worried about what they did as well.

The film then shows us a priest that is running away from something that is strong. It knocks down a metal door. The priest is knocked over the edge of the roof and falls to the ground. Whatever was chasing him catches up to him quite quickly, pulling him into the basement of a building. Watching this is Chuy (Alexander Goodwin) from an apartment across the alley. He is autistic and great at mimicking things. He lives with his father, Manny (Giancarlo Giannini) who is a shoe shiner in a subway station. Chuy sees the person that pulled the priest into the building and dubs him Mr. Funny Shoes.

Peter is called the crime scene where the priest disappeared. The reason for this is there are people being held in the basement and there are a lot of bacteria there. Josh (Josh Brolin) works with Peter and he’s the one that calls it in. They find some weird things in the building that are sent off for further tests.

At work Susan meets with Remy (Alix Koromzay), as well as two boys who come around to see insects to her. They have a special one and this is where Susan learns that the insect they created to wipe out the infected insects, the Judas Beetle, didn’t die out like they thought. It is also evolving. We see that something that doesn’t quite feel human break into the office and steal the specimen.

Susan and Peter then start to look where the boys found the insect. They try to go into the subway catacombs, but are stopped by Leonard (Charles S. Dutton), a police officer. They need the required permits, but they also find something at the local waste treatment plant. This leads them to learn more than they bargained for about what they are after.

As I started this off saying, I really liked this film growing up, but it actually had been awhile since I saw it. I know the last time was on my laptop while I was on vacation as I tend to wake up earlier than everyone else. I wasn’t sure if it would hold up and to be honest, I still think that it does. There are some aspects to this story I really like.

The first thing is I love the idea that nature will find away. I was first introduced to this concept through Jurassic Park. These insects they created are hybrids. I even like that Dr. Gates calls them Frankenstein as they are created from a few different things to ensure they can get the job done. They found a way though to breed, when they were supposed to sterile. On top of that, their lifecycle is quite short so they’ve actually in three years evolved much more than normal and I love this idea as someone who is fascinated by evolution.

Something else I really like here is that we are its greatest predator. As humans, we really do enjoy being the top of the food chain. This is something that is manmade and it is trying to take that spot. Through that evolution it has become an efficient killer which is intriguing.

To move next to the pacing of the film, I think for the most part this is fine. It doesn’t waste any time giving us the back-story and I think for the most part, it moves through the plot points at a good pace. We get to learn things gradually and you can actually pick up on some things if you are paying attention. I wouldn’t say that this is the most exciting film though. There are some points where it does kind of slow down, but not enough to the ruin the film. I do like how it ends, even though it is a little bit too happy for my liking.

The acting of the film I thought was pretty solid as well. Sorvino doesn’t necessarily fit in the role that she is playing, but I think that might be a personal issue. I’m used to her in much different roles so it is hard for me think of her in this one. She doesn’t do anything that ruins it though. She is quite attractive as well. Northam has a bit of arrogance about him and he fits his perfectly. It is interesting that he really should take a lot of the blame as he pushes for the creation of this insect. Goodwin and Giannini are both fine in their roles. I really like Dutton. He’s such a negative character in this film, but the older I get, the more I understand him. I thought it was cool to see cameos by Brolin, Koromzay, Abrahm and a young Norman Reedus. The rest of the cast definitely rounds out the film for what is needed.

If I’m going to be honest, something that isn’t great here is the effects. I think the practical ones like the blood and some of the insects are good. They definitely look real which is definitely a plus. I even think that when they decide to actually use a person in them, it is solid as well. I did notice that Doug Jones helps out here, which makes sense. This also could be the start of his working relationship with del Toro. The real issue is the CGI doesn’t really hold up for the most part. You can tell it is computer generated. Part of that was when the film came out, so I can’t be too harsh. The film is shot very well though.

The last thing to cover would be the soundtrack. For the most part it didn’t stand out, but it never took me out of the scenes though either. What I wanted to commend was the noises the insects make was good. It does get creepy some times, especially when a character doesn’t know they’re there. I also like that Chuy can mimic them, which is interesting as well.

Now with that said, this film does do some good things. I really like the idea here, that scientists created an insect to help the spread of a disease that is killing a lot of children. The problem though is they rush their creation evolves. This is something I really enjoy. The film is paced pretty well, but the problem is that there is quite a bit of investigation, so it isn’t the most exciting. It does have some pretty solid acting, which helps. The practical effects are good, but the CGI isn’t that great if I’m honest. The soundtrack doesn’t stand out, but the use of sound in the film does help to build tension in some scenes. Overall I’d say that this film is above average and flirting with being. I just had some gripes that prevent it from going higher. We do see the talent that del Toro will go on with later in his career for sure.