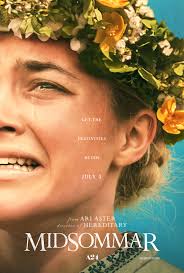 This was definitely a film that I’ve been extremely interested in seeing the moment that I heard about it. Writer/director Ari Aster’s film Hereditary was my favorite film from the previous year and I was intrigued to see how he would follow that film up. I caught parts of a couple of the trailers, but I tend to avoid them for the most part, since I know I’ll see any horror film in the theater. The synopsis for this film is a couple travels to Sweden to visit a rural hometown’s fabled mid-summer festival. What begins as an idyllic retreat quickly devolves into an increasingly violent and bizarre competition at the hands of a pagan cult.

We start this out seeing a picture of what I took to be the four seasons. It then shifts to being winter. It goes into a house where the phone is ringing. Dani (Florence Pugh) leaves a message on the answering machine and we see her parents are asleep. We then shift to her and she is freaking out. Her sister is bipolar and she sent a message that freaked Dani out. She is resistant, but finally gives in and calls her boyfriend Christian (Jack Reynor). He seems a bit aloof about the situation. He does comfort her while still giving tough love.

The film then does well at establishing their relationship. She feels that she is involving him too much and that he’s going to leave her. On the other side, Christian seems to want to break up with her for awhile, but he just hasn’t. He is out with Josh (William Jackson Harper), Pelle (Vilhelm Blomgren) and Mark (Will Poulter). Mark is adamant they break up while Josh  analyzes him that he takes the safe route and kind of just moves through life without making a decision.

This film then gives us a gut punch that sends Dani into a deep depression. Christian is there to comfort her and it then shifts to spring, a time of renewal. The guys have planned to go to Sweden to visit the midsummer festival that is happening in Pelle’s hometown. Dani hears about it at a party and is upset as she didn’t know Christian was officially going. His way of avoiding the argument is at first to gaslight her into apologizing, to then invite her and apologizes a lot to avoid dealing with situations. They are all empty though. He doesn’t really think she will accept, but that’s exactly what she does.

Upon their arrival, everyone seems so nice. They meet Pelle’s brother who invited a couple he met in London, Connie (Ellora Torchia) and Simon (Archie Madekwe). The group is offered mushrooms to hallucinate on and Dani at first declines and Christian elects to hold off as well. Mark throws a fit so everyone ends up doing it. The following day, they actually enter the small village.

There are some odd shaped buildings and some interesting murals on the walls. They experience the events and it takes a dark turn on the second day. Dani wants to leave, but this group is in for much more than they initially realize.

Now I wanted to go a bit vague here with my recap. Part of this is I don’t want to spoil things, but give you my assessment of it and for those of you on the fence about seeing it to try to convince of you why I liked or disliked this film. With that bit of a disclaimer out the way, I have to say that Aster is great at creating atmosphere. I think what actually works really well here is that I’ve been in a relationship like this before, where we are staying together, but we don’t really know why. A podcast I listen to said this and it hit home as I saw this playing out. Neither person really wants to leave, but they also know that it isn’t working.

I have to also say, Aster is great at giving you the gut punch to close out his first act. If you’ve seen Hereditary, then you know what I mean. This could be a mild spoiler you could say, but the event that happens doesn’t have a major impact on the story itself. It is more the effects of this have on Dani and in turn her relationship with Christian. I feel like it sets the tone and things just get progressively worse from there for her. It is interesting though, because this event happens before she gets to the village. I am also revising this after a third viewing of the film. My second was the director’s cut, which reveals much more about the relationship with Christian. I can see why some of this is left out the theatrical cut as it makes him look much worse earlier on. It makes me enjoy this more though.

Something else I got from a podcast about this film is that it takes place in the daylight for a majority. This makes the creepy things that happen even worse, because we lose that feeling of being safe. Horror fans know that they mostly take place at night to hide what can scare you until it is needed. This film is taking place where there is very little darkness at night and the sun is out the majority of the day. We can see everything and it is happening when we think that things are safe.

There is definitely a surreal feel to the film as there is a bit of drug use. It is actually more subtle, but a lot of the drinks given out have something in them that have hallucinatory properties. I found that interesting as it makes what is happening even that more unreal, despite us knowing that these things are happening. Having the character’s question their sanity is interesting.

The last aspect of the story I want to cover before moving on is I love the murals in this film. It is an old technique to foreshadow what is going to happen, but they’re out of context. Every time one happened it was like another revelation. I feel this is good storytelling and you know me, that’s what I’m a fan of. It is actually even better after the second viewing, now that I know what is coming as well. I also love that Josh is out to write his thesis on the pagan midsummer festivals from different places in Europe, so he has a reason to investigate. There is an interesting turn as well that Christian decides to finally write his while stepping on his friend’s toes. The idea that his name is one of the more popular religions in the world and coming to this festival isn’t a coincidence either. The cult aspect of the film is definitely one of my favorite parts as well, because that’s what this village is. Jaime and I got into a debate about our thoughts on what they do. It was quite interesting to be honest.

This brings me to the pacing of the film. I’m going to warn you, this film is long and it is a slow-burn. If you aren’t into those, you probably won’t like this film. I feel that the atmosphere and trying to figure out what was happening is what kept me engaged. The film did something that I really enjoy is learning more about what is going on here. I came in making predictions of things and that makes me enjoy Josh even more that he is studying this academically, because I feel like that would be more. The ending wasn’t expected and to be honest, I really dug where they took this. With everything that happens in the film, I think that it is kind of a vindication.

Speaking of what happens in the film, I want to move to the acting next. I will admit I’m torn on how I feel about Dani. I feel horrible for what she went through, but I can also see one of my exes in her, so that makes me dislike her a bit. She’s in a bad relationship and needs to move on. I do find her attractive though and as she participants in this festival, I can see her healing a bit as well. The ending I think is really hers. Pugh’s acting is amazing with her facial expressions to convey her deeper emotions. Reynor is such a jerk in this film, but he is also kind of a rock for Dani. He does a few things that are shady as well. I thought his portrayal of Christian was good though. As I stated above, the director’s cut really makes him look worse early on. Harper was one that I was a big fan of, as I feel like he’d be me. Blomgren was really solid in his role and I thought Poulter was hilarious. The rest of the cast definitely rounded out the film for what was needed.

To the effects of the film, they were amazing. They were subtle in the amount used, but they weren’t in how brutal they are. The ones done practically had me cringing and I loved it. There is some CGI in there as well and to be honest, I thought it was a good use. There are just times to show that characters are tripping. There is also some CGI fire that actually looked really good to me. The film is shot beautifully as well as it is so bright and the colors are vibrant.

The last thing to cover would be the soundtrack. There is a lot of ambient noise and music in the film. The songs are definitely cult-like and really make it eerie with what is happening in the film. They also do a lot of mimicking of other people which I did think was interesting as well. I do think this really helped to enhance the overall feel of the film and really make it creepier. It got my anxiety going which works for me.

Now with that said this film I really liked when I left the theater. I went to a late showing and then went to bed. The more that I’ve been sitting and thinking about the film, the more that I realize I really liked it. I do think this is a step down from Hereditary, but I don’t mean that as a slight in the least bit. I love the idea of the cult in this film and what happens when these Americans go there. This is kind of a break-up film as we have two characters that shouldn’t be together and are just there for the convenience. Dani  feels alone and is looking for a ‘family’. That aspect is also scary as that’s the fear of cults as well. The deeper story here is great. I thought the acting brings this to life and even though it is a slow-burn, I think that is builds tension. There aren’t a lot of effects, but what we get is really good. The score of the film definitely enhances the scenes as well. I found this to be a really good film after those initial viewings. I’m convinced this is a damn near perfect movie for me.