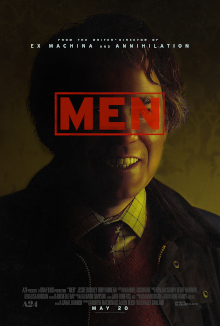 This movie’s trailer popped up when I was at the Gateway Film Center. I saw part of it and stopped when I realized it was a horror movie. I didn’t catch until closer to its release that this movie was from writer/director Alex Garland. I’ve liked the two previous films from him, so I knew I would catch this. I saw it the day after its release back at the theater as well.

The synopsis: a young woman goes on a solo vacation to the English countryside following the death of her ex-husband.

We start this movie with Harper (Jessie Buckley) arriving at a country manor. The house is quite large and she takes an apple from a tree in the garden. She is greeted at the door by Geoffrey (Rory Kinnear). He owns the house and rents it out to different tenants. When he greets her, he calls her by her married name and she corrects him. We learn later that the mix-up is due to her booking this when she was married. Since then, her husband has passed away.

It gives us different insight into what happened there. Her husband was James (Paapa Essiedu). She was seeking a divorce and this upset him. He died the day she said she no longer wanted to be with him. There is more to the story and he may have committed suicide. Harper kept the trip to clear her head and get over what happened. Checking in on her is her best friend, Riley (Gayle Rankin).

What should be an idyllic trip to the country takes a turn. Harper goes for a walk in the nearby woods and ends up at a tunnel. There is an echo with it and she uses it to create a song. While doing this, someone stands up at the other end. They come after her and she flees. She can’t seem to find her way back and goes up an embankment. There she takes a picture of a building and notices there is someone in the picture. It is a naked man. This person also appears in her garden the next day and tries to get in. She calls the police, but we see there is something odd here. The men all seem to look like Kinnear. Is this a coincide or is there something more here?

That should be enough information to set up the first act of the movie as well as to introduce the main players. Where I want to start is with our lead. Harper corrects Geoffrey from the opening lines they speak and that caught my attention. From there, we learn that it is just a misunderstanding and part of that blame is on Harper. She is dealing with a lot and it is a minor one. This movie is looking at the plight of women as the first and foremost thing here. The title put this in my head. There are things that Geoffrey says to her. As the movie goes, she must deal with seeing a naked man outside of her place, the police downplay what he did as well. There is also a teen that is rude to her and a vicar that believes she should take more of the blame for what happened to James. This is exploring toxic masculinity.

The relationship between these two is where I want to go as well. I’m not going to spoil things there, but we are getting more of the concept I brought up here as well. What I will say is that James doesn’t want a divorce, but Harper can’t be married to him anymore. There are a few things he says to get her to stay. It culminates in the worst of them when she refuses him. There are things like pleading, begging, gaslighting and then physical abuse. Leading up to it are all forms of mental abuse. It gives an interesting look at men and what they do when their back is against the wall. I’m sad to say, I’ve done some of these things which are mental abuse. I’m not proud of it, but it is something that I try to learn from when speaking with my partner. Some might think this movie is to on the nose, but I think how it is used is well done. It is subtle and the different men that Harper encounters in the present show signs as well.

With that fleshed out, I want to go to the horror elements. At first it is grounded with seeing the naked man outside. It grows from there that there is something not right with this village and the men in it. There is a religious angle that I enjoyed. The first bit there is with Harper eating the apple and then Geoffrey making a joke about the ‘forbidden fruit’ as well as to not eat them. That last bit is him messing with her. It doesn’t land well and part of it is him not reading the room. He isn’t the only one who misses it. Harper goes to a church where there is an odd alter that shows a face and on the backside of it is a woman with her legs up, exposing her vagina. Both images come back into play and are revisited. That is something else with the film. It comes back to images regularly and I thought that the editing was good there. We can feel the tension ramp up with Harper being attacked at night in the home she is staying. What happens there is quite surreal. There is a message here of Harper needing to come to terms with things.

That should be enough for the story so I’ll then move over to the acting. I thought that Buckley was good as our lead. She seems sad when she arrives and that she needs time to heal. We are introduced to both early on. What I like with her performance is the path she takes. She becomes a victim and when she realizes that no one is going to help her, she becomes strong. I loved seeing that. Kinnear steals the show. A lot of that though is the different roles he gets to play. Essiedu is solid as is Rankin. Both help to push Harper where she ends up. Other than that, the rest of the cast are solid for what is needed as well.

The final things to go into would be the filmmaking aspects. We have good cinematography here. I’ll bring back up the editing, as I feel that helps with the shots that we get. There is a surreal feeling to the movie that just grows with each scene. I can appreciate how it builds tension there. I also include the soundtrack. I love the scene with the tunnel and the song that Harper creates. That comes back into play with the climax, which I thought was good. The last bit then would be the effects. We get practical ones which were fine. There is also CGI. I will give credit as all three of Garland’s movies use computers. All of them look good though where I don’t have issues. There are some parts that I could tell CGI was used, but not enough to ruin things for me. I think this is a well-made film.

In conclusion, this is a movie that as the third act started, I was loving it. Upon watching what plays out and leaving, I wasn’t sure what I saw. I’ll admit that I did read up an article to help gather make sense and confirm what I saw. This movie is well made. I can give credit there to Garland. The commentary this movie uses could be in the face of some people, especially if you think like the men in the movie do. I enjoy the message they’re conveying. There is a bit of religion mixed in there which I enjoy in my horror. The acting is good. I like Buckley as our lead, but the true star is Kinnear for me. After this first viewing, this is a good movie. I do plan to rewatch this for my year-end list as well.