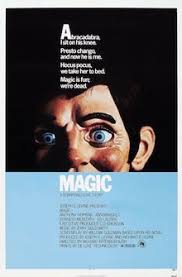 This was a film that I used to catch on the movie channels, but it was always late into it. I would always add it to a mental list of a film to check out and got the chance when I decided to participate in a horror movie challenge. The synopsis is a ventriloquist is at the mercy of his vicious dummy while he tries to renew a romance with his high school sweetheart.

We start this with Corky (Anthony Hopkins) coming into an apartment where Merlin (E.J. André) is sleeping on the couch. He is sick and he asks Corky how his first solo performance as a magician went. Corky doesn’t seem to keen on sharing and just kind of humoring him, but Merlin continues to ask. We hear what Corky is telling him, but actually seeing how it played out, which is much different. Merlin catches on what the truth of the matter is and tells Corky he needs to find charm if he’s going to make it. Corky had a pretty bad blow-up to end this first one.

It then shifts to Todson (David Ogden Stiers) arriving at the same club as before. He is an executive with NBC and he’s there to meet with Ben Greene (Burgess Meredith). Todson is shocked to learn he’s there to see a magician, as they don’t really work on television programs anymore. Ben thinks he really needs to see Corky. The performance starts off much like the first one, but it takes a turn when a ‘drunk’ calls him out and he goes into the crowd. The voice is actually that of Fats, Corky’s new ventriloquist dummy. Todson is impressed with the act and Ben really wants him to consider making Corky a star.

We then shift a bit more into the future, where Corky meets Ben for lunch at a fancy restaurant. It is there that he learns a pilot special has been ordered, but Corky freaks out when he learns he has to take a medical exam. He refuses and wants Ben to get that part of it cleared. There’s nothing that can be done, which causes Corky to flee without telling anyone where he’s going.

He ends up going to the place he grew up. His parents have passed away and no one lives in his family house. He then seeks out the home of his school crush, Peggy Ann Snow (Ann-Margret). He’s shocked to find that she is there. He convinces her to let him rent a cabin and he’s bummed when she doesn’t recognize him. We then see that she feels the same way about him. From there, the two of them hit it off into an affair. The problem is that she is married to Duke (Ed Lauter). Fats doesn’t necessarily approve either and Corky has to come to terms with the truth of all of this.

From my original thoughts on the film without actually seeing it and just from the parts I caught, this is different than what I expected. I always caught it during the climax where I wasn’t sure if the doll was possessed or if this was just something psychological with Corky. Having seen it all the way through, it is actually pretty cut and dry. That doesn’t bother me though, because what this film is really looking at is interesting.

This is really a character study on Corky. He is a guy who has been lacking in confidence since high school and is going into a profession where you need that and charisma to win over the audience. His first performance results in him bombing and he takes it hard, to the point where he is yelling at the audience. That’s when he discovers Fats, which allows him to release his vulgar feelings that he represses. It is interesting that he doesn’t realize he’s had a psychotic break and almost a split personality with him being the good, timid one and the doll itself being the dark, vulgar and violent side of him. It makes sense why he freaks out about the medical exam and Ben catches on as well.

What makes this film sad though is Peggy had a crush on him back in school and she still has feelings toward him. Duke is neglectful and she seeks what she is missing from him. Corky’s insatiability makes her consider staying in her current situation, but she is inspired by the hope with this other man. The problem also is that she doesn’t realize he’s broken mentally. I think she catches on that he’s using Fats as a way of revealing things, but not taking ownership. I just don’t think she realizes that he sees him as another living entity.

As for the pacing of the film, this is definitely a dark character study into a man who is broken psychologically. I can see some people saying this isn’t horror. I could make the argument that the feel of this, how dark it is and the things that Corky/Fats do are pretty horrific. What is surprising to me, they were able to establish the opening story without bogging the film down and getting into it. This already runs 105 minutes, but to be honest, it doesn’t feel like it. We really get the reveal and progression of how broken Corky is and seeing the affair between him and Peggy grow naturally. This has a down beat ending and I really dug that as well.

That will take me to the acting of this movie. Hopkins is absolutely amazing and I didn’t expect anything else. Seeing him snap at his first show and how upset it makes him is both sad and scary. I’m shocked at how good he is ventriloquism, because it is unreal. Doing it in a film is easier than on stage, but regardless there is still a bit of natural talent. Seeing how dark he goes is great here. Ann-Margret is beautiful and I liked her interactions with Corky. I don’t like she’s cheating on her husband, but being neglected I can see why she would. Meredith is also great here. I believe he could have been an agent and I love how he can just read people. Lauter is solid as well along with the rest of the cast to round out this film.

To the effects, this really isn’t a film that needs to use a lot of them. I think that the dummy is used in a way that definitely looks real. It is also quite creepy at times, because I wasn’t sure if this was going to try to say that it might be possessed. It is well done if you can give this feel without going that way. There is some blood that looks good and the effects were done practically so it looked real. This is also shot in a way that was well done also.

Now with that said, I’m definitely glad I finally watched this all of the way through. I wasn’t necessarily sure what I was getting into, but it was an enjoyable dark character study of a person who has been broken by not being able to make it in his dream profession. Seeing him use Fats to get the dark parts of his personality out is interesting and makes things happen later. Despite the running time, it doesn’t feel like it and builds tension throughout. The acting was good and the effects we do get are solid. The soundtrack didn’t necessarily stand out, but it also didn’t hurt the film either. Overall I think this is a really good movie. There isn’t a lot that happens so if you don’t like character studies, avoid this. It is just worth it to see Hopkins performance here if I’m honest.