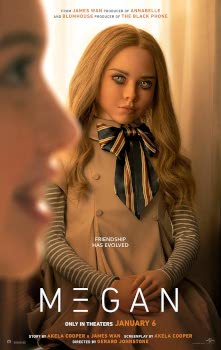 This is a movie that I thought was coming out last year. When I heard that it was dropping in January as the first theater horror movie for 2023, I was intrigued. I did go see this that opening weekend. It is one that I didn’t watch trailers or know much about the plot. I saw pictures and knew that it featured a robot. That was about the extent.

Synopsis: a robotics engineer at a toy company builds a life-like doll that begins to take on a life of its own.

We start this off with commercials for a new toy for kids. It is like a Furby, but the mechanics inside are more advanced. It can learn and adapt to things. The problem is that you need an iPad to use it to its full potential. We then see Cady (Violet McGraw) in the car with her parents. She has one of these toys. It upsets her mother who feels like Cady’s aunt only gave it since she works for the company. Tragedy strikes, killing both parents.

We then get to meet the aunt. Her name is Gemma (Allison Williams). Along with her team of Cole (Brian Jordan Alvarez) and Tess (Jen Van Epps), they’re trying to make the next best toy. The problem is that her boss, David (Ronny Chieng), wants her focus on making a cheaper version of the toy that is already selling. A competitor somehow found a way to do this so it is cutting into their business. Gemma tries to show the prototype, but it fails. This puts her in hot water and in a jam to be sued. This is when she learns of the tragedy.

Gemma is forced to take custody of Cady. What I mean here is forced to do the right thing. The state is leery of her though. She doesn’t have any toys for her and she seems more focused on her own life. The way they bond is over a robot that Gemma made in college. Cady says things that gives her an idea for the prototype. From this point on, it will be referred to as M3gan (Amie Donald and voiced by Jenna Davis).

Using Cady in the demonstration, David is on board for this new robot. The goal is then to show it to the higher ups and get them sold on it. This works, but Gemma also rushes the programming. M3gan bonds with Cady and will protect her at all costs, even if it means murder.

That is where I’m going to leave my recap for this movie and introduction of the characters. Where I want to start is with critiques that I’m seeing. The first is that this movie borrows heavy from the Child’s Play remake. I would agree there. We have M3gan, like Chucky in that version, who will protect the child it has bonded with no matter what. This movie is also borrowing that M3gan can connect to the cloud and other machines. It is what it is, movies mimic others all the time so it doesn’t ruin it for me. This movie is also exploring the idea of AI and the dangers of it getting too advanced. Again, another concept we’ve seen explored.

Which is the next thing that I want to delve into. Movies that spring to mind for me are like Robocop or The Terminator when it comes to following certain protocols. How this manages it is that Gemma is using company funds for this project when she shouldn’t be. This rushes her into a beta product. M3gan pairs with Cady who avoids dealing what happened to her parents by latching on to this robot. I think it does good for her. It gives her someone to talk to. Gemma should be the person that she confides in though. She isn’t prepared for parenthood. I did like the commentary here about not being ready, despite your age. As a new parent myself, there are times I question if I’m truly ready or not.

Now I got away from what I was trying to explore and that is the rushing of the protocols for the robot. M3gan isn’t supposed to hurt people. I’m getting the idea that Gemma didn’t put this in fully or at all. M3gan will kill to protect Cady, even if someone makes her sad. M3gan being connected to the internet is a bit like Ultron. She learns things that she can’t fully comprehend since there is a lack of emotion. We’ve seen AI getting too advanced in movies for decades. I don’t know if this one explores anything new, but I still like the commentary there.

Where I’ll then go would be the acting. I thought that Williams did a good job at being this aunt who loves her niece, but isn’t ready for what it takes. There is growth there which works. I credit her for that. McGraw does great at showing emotion as a child dealing with trauma. I was impressed here as well. Chieng is good as the jerk boss. Donald does good as being the body of M3gan and Davis as the voice. I’d say that the rest of the cast rounded this out for what was needed as well.

Another gripe for this movie I’ll cover in the filmmaking. There were people upset that this is rated PG-13. I don’t mind it. Does that mean the gore is scaled back? Yes, but there were things here that made me cringe still. It can be well-done at times if you can hide things and leave it implied. There was CGI that didn’t necessarily work for me. Not all of it, but just moments here and there. I think other than that, the cinematography is good. The soundtrack also works for what was needed here without standing out.

In conclusion, I enjoyed this movie. I was expecting it to be odd and didn’t know what to think coming in. There is good heart here with the tragedy of what happened to Cady’s parents and trying to overcome that trauma. We also see a new guardian who isn’t fully prepared on how to help. That’s not even getting to this robot, M3gan, and what she will do to protect the girl she is paired with. I thought this was well-made. A bit cheesy at times, but I still enjoyed my viewing. I would recommend giving this one a watch. Don’t come in expecting a lot and just enjoy what you get.