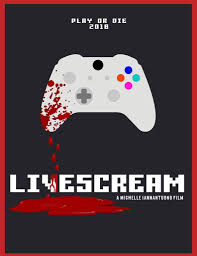 This was another film that I got the opportunity to view at the Nightmares Film Festival. When I looked at the line-up and was intrigued by the concept of this film. Oddly enough, I ate lunch with a few people there and it turned out one of them was the director and writer of the film, Michelle Iannantuono. The official synopsis for this film is when a popular video game streamer plays a haunted game, he faces deadly consequences for himself and his fans.

The concept of this film is quite interesting. It is utilizing the program Twitch, where you watch someone play video games and can interact with them. I’ve never done it myself, but it is definitely something that I find intriguing that it is as popular as it is. The main character is Scott (Gunner Willis). He has over two hundred followers who are going to watch him play a game today. He states that someone recommending to him a horror game that he had never heard about.

To kind of give you an idea, we see the face of Scott, a chat box for those that are watching him can interact as well as others and then the largest screen is that of the game that he is playing. The game starts off in a three dimensional world. It actually is powered by the Unreal engine, which was pretty cool as well. I only point this out as I have played games that use the engine and didn’t realize it could be used for something like this.

Scott soon learns there is something more to this game though. He dies on the first level since he doesn’t have a way to defend himself. One of his viewers exits the chat. Another one tries to contact him and is worried that something really might have happened. Many of the users flee and leaving only a few of his hardcore fans. A guy with the username JohnnyDope comes in and mocks everyone that is there, including Scott. I found this aspect interesting, because from what I know about online games, you’ll get bullies like this that will come in and just belittle those that are involved.

After some levels and some deaths, Scott is forced to continue on with just two people. This is wearing on Scott and he doesn’t want to choose. He does get two volunteers, one being JumpingWolf who is the moderator for him and the jerk JohnnyDope, who still thinks this is just a game. He starts to panic when he can’t escape from the game too.

This film has a short running time of about 66 minutes and I actually think that is perfect. It doesn’t stay too long and it moves at a solid pace. It does very well at building tension and it does it in the way that I used to get from playing some video games. Coming into any survival horror games or coming into a tough boss in a role playing game, I would get a level of anxiety, which is what this film gave me. Part of this is from not knowing what is going to come next in the game, while the other part is seeing the reactions of Scott.

Something else that I wasn’t expecting about the film was the emotion that it would bring. Scott is a pretty nice guy and just on here to have fun. There are some trolls he has to deal with, which is something that we all have to deal with in life. I felt bad seeing JohnnDope just mock everyone that is there. I’m all for people doing what they enjoy, so it is sad to see to someone raining insults down on them. There are also emotions as people are dying. I didn’t feel as much as I should there as we don’t really connect them. Seeing how it bothers Scott did affect me though as I did connect with him.

This would bring me to the acting for the film. I thought Willis was fine as the star of the film. He is at first a guy who is easily excitable, but as he continues to play the game, we see the gravity of what he is doing weighing on him. As I am writing this I realize that he we never actually confirm that anyone dies, but he believes they are. I also thought the aftermath of what he does when he realizes the ramifications was good as well. I don’t have much to say about the rest of the cast, we really don’t get to meet them in their acting and some of it is just pictures of them. They do round out what the film needed so I will give credit there.

The effects of the film I thought were fine. After the film during the Q & A, Iannantuono did inform us that she built the world of the game and actually had Willis play in it. I thought that was good as it actually made the reactions that much more authentic. The 3D levels were good, but the one that really touched my heart was the 2D version that is similar to the Pokemon games. It really made this video game based film more authentic. To go from there as well, is also an interesting found footage film similar to an Unfriended or its sequel. It does add a bit of realism as well in that way.

Going along with the found footage aspect, there really isn’t much in the way of a score aside from the music and sound effects for the game. I’m glad they went with only the ambient noise of that and from Scott. It brings more realism to the film and it makes it seem like this could be really happening. I give the film a lot of credit here.

Now with that said, I actually really enjoyed this film. I thought it had an interesting concept of something that is popular in watching others play video games. Incorporating a haunted game that is killing those that are playing and watching I thought was good. It brings a level of realism how everything is framed as well as making it found footage. The acting from Willis was good and the rest of the cast do what they need for it. Bringing the game to life was good and it gave me anxiety watching it being played. The film has a low running time and I think it helps with the pacing of the film. The score being ambient from the actor and the game itself was a good touch for the realism. I like that this film isn’t overly explained also. I would say that this film is good and definitely worth a viewing.