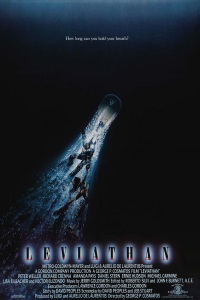 This is a movie that I’m not quite sure when I first heard about it. I’ll be honest, I feel like due to where it takes place, under the ocean, and with what they’re doing, I wouldn’t be surprised if I got this and The Abyss mixed up. Regardless, it was one I was intrigued to check out. I’m now doing that as this is an Italian co-production for Italian horror month. The synopsis is perched on the hull of a wrecked Soviet freighter, a team of deep-sea miners led by head oceanographer Steven Beck (Peter Weller) comes face to face with a mutant creature.

Much like the synopsis states, we learn a bit of where this is taking place. Tri-Oceanic is a company that does mining under the water. There seems to be precious metals down there. We are following this group that is led by Beck who is a geologist. He is a bit over his head though with leading this crew. He’s used to conducting research and not so much leading people. It was the idea of Ms. Martin (Meg Foster) for him to be in charge.

They run into an issue when DeJesus’ suit malfunctions. He is afraid he will implode. Beck tells him to relax and tries to navigate this situation. Doc is supposed there with him in the control room while the crew is out, but he’s no where to be found. Despite the tension of this situation, Beck keeps his cool and gets everyone back safe.

The crew is tight knit. They don’t take kindly to Beck due to his inexperience. Willie is nice to him, but the rest need to see more from him. Beck does give them a day off if they’ll do some repairs around the command center. This causes a prank to go wrong that forces Sixpack and Willie to go out mining. A bit of a slipup causes Sixpack to fall over a ridge and disappear. Willie goes after him and instead finds a Russian ship that has sunk. The name on the side is Leviathan.

There is a bit of searching around in it and some items are brought back. Information in this system regarding the Leviathan doesn’t add up. Doc can read a bit of Russian and he believes that the ship was sunk on purpose. There is a VHS of the captain’s log of this ship, Eugene Lipinski, who reveals a bit of information, but it is also cryptic.

We then see why Doc might be right. The crew starts to come down with an odd rash that kills them quickly. Changes seem to come over the body and when Doc tries to analyze the data, the answers don’t make sense. The information he sends over to database comes back just as confused as well. Beck is faced with a difficult decision and a company that is profit driven.

That is where I’m going to leave my recap for this movie. Where I want to start with my analysis is first with where this takes place. I’m equal parts fascinated and terrified of the bottom of the ocean. It is a place we cannot investigate easily and there could be things down there we don’t have any idea of about. It also makes for an interesting setting for a horror movie. It isolates the characters and difficult to flee from. What I was thinking while watching this as well is that it feels like it is borrowing heavy from The Thing, but instead of the Arctic we are at the bottom of the ocean.

Where I’ll go next would be the idea of this being like The Thing. The information that Doc is getting back is that this could be a genetic mutation. Being that this came out in 1989, it feels a bit like it is taking a shot at the Soviet Union due to the Cold War. There is the idea being hinted at that this Soviet vessel was doing experiments on its crew to see if they could make them adaptable to be under the water. This isn’t too different from The Thing in that we have crew members changing into monsters here. What I do have to say though is that this movie isn’t as effective though. There was a bit of an issue building tension and isn’t as exciting unfortunately.

There is a bit of social commentary I want to bring up here that will lead back into this monster and them being trapped below the water. Ms. Martin selected Beck to lead this operation due to him being a geologist, despite his lack of leadership experience. Her idea is that he could figure out the metals and net a bigger haul. She also has Doc down there who is a famous doctor who made a couple of mistakes that ruined him. There are multiple times where Jones and Cobb are quoting their contract and mentioning them being protected by the union. They know the company doesn’t care about them and it is all about the money. There is another part being included here with information being relayed down to them when they’re in trouble and the hiding of certain data that could contradict it as well. This is still something we are dealing with which is interesting 20+ years later.

That should be enough for the story, so I’ll take this to the effects. When I saw Stan Winston’s name, I was excited. I like what we’re getting here. It doesn’t look completely real, but I mean we are dealing with fictional creatures. By going practical makes it look better, even at times I could tell that it wasn’t real. I do think the cinematography helps here as well. It is strategic to not focus on the monsters so we can pick it apart. Both helped and worked in unison as well. I did have a slight issue here with something at the end. We are dealing with equipment that is a bit futuristic, which is the explanation. How the characters get to the surface of the water though doesn’t feel like it could happen that way.

Then the last thing to go into would be the acting. I thought that Weller fit here as our lead. It is interesting as I know him from things like Robocop or Naked Lunch. He is a confident guy here, but I like that he knows his shortcomings. His performance worked for me as Beck. I thought Crenna was good as Doc. Where his character ends up is interesting. Pays is solid as Willie. It is always fun to see Stern since he will always be Marv from Home Alone in my heart. I liked Hudson, Carmine, Eilbacher, Elizondo and Foster as well. They all fit for the different characters we needed here.

In conclusion here, this is a movie that I did enjoy. It does feel a lot like The Thing, but just under the ocean. I think that we have interesting enough characters. I like the concept and location for this movie as well. The practical effects look good and the soundtrack fit for what was needed as well. I did find this to be a bit boring if I’m honest. We have our characters not necessarily interacting with the creatures as much as I would like. This doesn’t ruin it, but it didn’t help either. I’d say that overall, this is an above average movie that is bordering on being good. I would recommend giving this a viewing if things I’ve said here work for you.