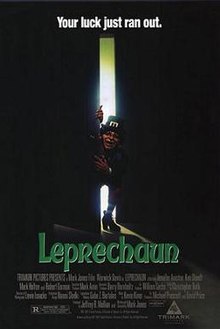 This was a film that I know I saw once while growing up. I think I’ve caught scenes here and there, but I can’t recall if I ever saw it again. On top of that, I might have seen the sequel before this one to be honest. This is definitely a fun film that really embraced what Freddy became with the comedy. The synopsis is an evil, sadistic Leprechaun (Warwick Davis) goes on a killing rampage in search of his beloved pot of gold.

We start this film with the Leprechaun coming down some stairs in its hideout. He has a pot of gold and is running his hands over it. It then shifts to a house in the middle of the country. We come to find out this is in North Dakota. Dan O’Grady (Shay Duffin) is dropped off at his house by a driver and his wife, Mrs. O’Grady (Pamela Mant) is scolding him. He reveals that he has found a pot of gold and took it from a leprechaun. She doesn’t believe him and Dan cracks open an urn where he smuggled it into the country with. Mrs. O’Grady goes into the house and hears a child crying. She opens Dan’s suitcase and the Leprechaun emerges. He pushes her down the stairs to the basement and Dan comes in. He ends up getting the creature into a crate and uses a four-leaf clover to keep him there. He tries to set it on fire, but has a stroke.

The film then shifts 10 years into the future. We have Tory (Jennifer Aniston) with her father J.D. Reding (John Sanderford). He purchased the house that belonged to the O’Grady’s to fix it up. Tory gets spooked with how dirty it is and wants to leave. That changes though when she’s mocked by Nathan Murphy (Ken Olandt). She changes her mind to prove him wrong. Nathan is there with Ozzie (Mark Holton) and Alex (Robert Hy Gorman) to paint the place.

Things take a turn though when the crate is opened by Ozzie. He sees the Leprechaun, but he can’t stop Ozzie as he’s been locked up all that time and without his gold, he’s lost his magic. No one believes Ozzie about what he saw. They do see a rainbow and Ozzie wants everyone to find the end of it. He goes off and Alex follows. They end up finding the satchel of gold that Dan hid. Ozzie tries to bite a coin, like he saw in the movies. He ends up swallowing it though.

There are some odd things happening, like the Leprechaun rubbing Tory’s leg from under the truck. When she goes to look, it scratches her. Her father goes after what he thinks is a cat and it bites his hand. The Leprechaun follows them into town, wanting to get his gold back. He will kill anyone in his way to do so as well.

Now this film isn’t great. That’s not to say it isn’t good, but I just want to temper your expectations if you’ve never seen this. The premise is actually pretty solid though. I love the idea of taking this mythic creature and making it vicious. It is interesting, because growing up there is obviously the cereal Lucky Charms, where the leprechaun there is nice version. This one most definitely is not.

This film does do some really good things. Having seen some of the sequels as well, I know that this series has some of the worst continuity out there. They really don’t even try if I’m going to be perfect honest. Being this is the first one though, I like what they set up here. The Leprechaun has magical powers and I really like that being locked up and not having his gold has rendered him pretty much powerless. The only thing he has is that conventional weapons hurt him, but will never kill him. He needs to get his gold in order to become magical again.

I also like that they incorporate so much of the mythology here. I like that he is easily distracted by shoes, as he is a cobbler by trade. There are four-leaf clovers. The outfit that he wears is pretty great as well as it is quite authentic.

This film is actually pretty progressive as well. Tory tells of Nathan who is trying to reinforce gender roles. She tells him that it is the 90’s and that women can make their own decisions. I completely agree here, but it is interesting though that this is relevant and something we’re seeing quite a bit in the news at the moment. This film being 25+ years old and it is still an issue.

I’m not the biggest fan of horror/comedies. It really takes a special one for me to be on board. I will say that I love the rhymes that the Leprechaun does. Davis really kills this role and it kept him working for most of the 90’s thanks to the sequels to this one. His performance as the creature is great. This film is over the top at times, but I will say that they blend it pretty well with the horror elements.

Since I already covered Davis’ performance, I might as well move to the rest of the acting. I did bring up that Aniston is in this film. She isn’t great, but you can definitely see that she has talent here. She is still gorgeous to this day and it is great to see her when she was just breaking into acting. I thought Olandt was solid and he plays off Tory well. Holton is great as the dimwitted friend. He is pretty funny at times and I also like Gorman. He plays a character who is still a kid, but pretty wise still. The rest of the cast does round out the film for what is needed.

To the pacing of the film, I don’t really know if it builds tension as well as it should. I think a lot of that is due to the comedic elements here. Like I did feel that the characters were in trouble, but they’re able to flee this house multiple times while the Leprechaun is there, even with its full magic back. I did like how it ended though and I thought that was a good touch with the mythology.

Next to the effects of the film, which I thought were good. They went practical for most of it and I think that works. The blood looks good and I think the wounds that are inflicted on people are as well. The only time that went with computer graphics would be for some of the magic and I honestly thought that looked good. I really didn’t have any issues here and I think the film is also shot well.

Now with that said, this is a fun film. I don’t want you to come in expecting too much as this is a film that I think works well to have some buddies over and a couple of drinks. It is outrageous, but there are some deeper issues here that are still relevant today. I like the mythology they used and incorporating that. They do ground the powers of this creature, which I think works. The acting from Davis is great and he actually made me chuckle with some of his lines. It is fun to see a young Aniston and the rest of the cast is fine. The effects in the film are good and its shot well. The soundtrack really didn’t stand out to me, but I think the use of sound effects helps make some scenes creepier. The Leprechaun can mimic animal noises and people’s voice which can be scary. Overall I’d say this film is above average.