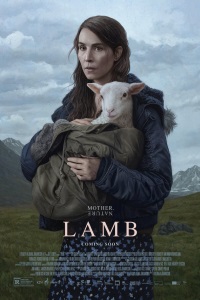 This was a movie that intrigued when I learned of it. The trailer was being shown at the Gateway Film Center. I will admit that I did watch part of it, but learning this was from A24 and a horror film, it was going on my list to check out. It was also a bonus watch for an October challenge so that helps as well. The synopsis is a childless couple; Maria (Noomi Rapace) and Ingvar (Hilmir Snær Guðnason) discover a mysterious newborn on their farm in Iceland. The unexpected prospect of family life brings them joy, before ultimately destroying them.

Much like the synopsis states, we start off getting a look at life for the married couple of Maria and Ingvar. They have a farm where they plant crops and tend to sheep. Helping them is their dog and cat. They don’t talk to each other much, but we get an interesting conversation about time travel and how scientists prove that theoretically, it could work. Ingvar states it would be interesting to go into the future to see how the world is, where Maria wants to go back into the past.

One of their chores is to help when lambs are born. There is one that they remove that is quite different. The two of them take it inside and give it special care. They even have to kill what I’m assuming is the mother that is quite concerned with her child that was taken.

Their world is challenged when Ingvar’s brother arrives, Pétur (Björn Hlynur Haraldsson). He questions them and does some interesting things to this lamb they’re caring for. There is something much darker though that is now stalking the farm with a special interest in this child.

That is where I’m going to leave my recap as there isn’t a lot to the story of this movie. It is more of a character study of the two parents, how this special child changes them and even a taste of the outside world coming into play here.

Where I’ll start then would be breaking down the characters. As I said early, Maria is interesting to me as she wants to change the past. I get the idea that she either lost a child or just could never have one. There is also the possibility that her and Ingvar got too busy and just never put the full effort. Regardless, this seems like a loveless marriage. That is until this lamb is brought into their lives. We then see their demeanors change. It is probably there the whole time, but something was missing from their life.

On the other side, we have Ingvar. He seems like he is more comfortable with their current world. I take that is why he wants to go into the future. That’s not to say that when this lamb comes into their life, he isn’t elated. He most definitely is. When his brother arrives, this adds an interesting dynamic. I take it he’s showing the outside world. Maria and Ingvar stick to their farm. Pétur finds it odd and makes comments. His brother doesn’t want to hear it. If this couple tried to live in the city, it is what this child would deal with. There is a great tense moment with him and the child as well. I’m trying to keep this vague to avoid spoiling as I think it also needs to be experienced.

That should be enough for the characters that I’ll then go to the acting. Rapace is an actress I’m a fan of. She does a great job as this woman here. I’ll go back to that one little comment, her body language and facial expressions. She conveys so much without talking. Playing off her is Guðnason and I think he does a solid job too. Much like her non-verbal cues, I get a lot even when they’re not talking. I’ll also give credit to Haraldsson to the tension he creates by showing up. Invar Sigurdsson and Ester Bibi are also in this in minor capacities, but they do well for what was needed.

The last things to go into would be the cinematography, effects and soundtrack. For the former, this movie is shot beautiful. This is from the landscapes to the interesting camera angles that we get. I was thoroughly impressed. We get some interesting visual effects as well. I know this was done with CGI, but it was seamless to me. Even more so with what happens at the climax. As for the soundtrack, I thought that fit for what was needed without necessarily standing out. The use of animal noises adds a creepy vibe at times that worked for me.

So then in conclusion here, this is an interesting movie. It is a bit hard to talk about without going into spoilers, but there is more to it than just the crux of what changes this couple’s life. We have two great performances from Rapace and Guðnason that it almost feels like they could be these characters. There is an interesting commentary about protecting your way of life and the worry about your children with the outside world. The movie looks amazing, the effects were solid and the soundtrack fit for what was needed. I would say that after this viewing, I’d say a good movie. Not sure I will be able to go higher, but I will give this a second watch.