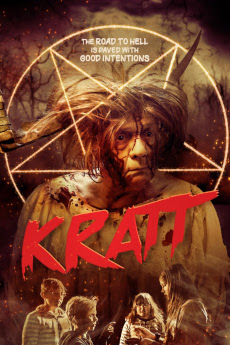 This is a movie that I got to see thanks to Justin Cook who sent it over a screener. What I knew coming in was that this is a taking a fairy tale and giving a modern look at it. Something interesting about this is that as I settled in to watch this, I knew this lore. It was covered in November. That made me curious to see what they would do with it here.

Synopsis: children are left a grandma’s house without their smartphones. Real life seems boring until they find instructions for kratt – a magical creature who will do whatever its master says. All they need now is to buy a soul from the devil.

We start this back in 1895. The governor at the time, played by Ivo Uukkivi, watches on in horror as a little person kills two men. We see that he has a book on his desk that features an upside-down pentagram. We then shift to the present. A mom and dad are driving across country. They’re played by Mari-Liis Lill and Marek Tammets. We even see them go by the building from the beginning.

They’re still driving as it gets dark. They arrive at grandma’s house. This would be the mother’s mother. Grandma is played by Mari Lill and she is willing to watch Mia (Nora Merivoo) and Kevin (Harri Merivoo) while the parents go away to a retreat. The father has just quit his job, so he’s looking to find himself. The children are left here while they’re asleep.

This then becomes a comedic look at children today vs. the older generation. Grandma works every day. She must tend her animals and the upkeep of her house. She doesn’t have a lot of money so she can only buy what she needs. Mia and Kevin live on their phones. They’re upset to find that their parents accidentally took them when they left. They must find what they can for fun. They do befriend twins, Juuli (Elise Tekko) and August (Roland Treima). Their father is a local activist trying to save a nearby forest from a logger.

Coupling with this is the governor, also played by Uukkivi. He is upset by social media and it makes him look bad. He wants to shut it down. It is frustrating to know that it isn’t possible. He creates problems for himself by signing a permit for a logger to cut down a nearby sacred forest. He then tells the activist group that he will save it as well. His office is being moved and books are taken to store at the local library.

Things all take a turn when Mia and Kevin learn about the kratt. This is a creature that is made to work. It will ask its master for what to do. If you don’t get it that, it will kill you. The children get their grandma to go a on a spa day. Instead of doing the chores, they go about building this creature. They take blood from a local clinic and make a deal with the devil. Things don’t work as they want though. It leads to a bloody path as even NATO learns of this creature.

That is where I’ll leave my recap and introduction to the characters. Where I want to start is that this is a long one. This is pushing two hours which is tough when you’re making a comedy. I don’t like to start with a negative, but I had to bring it up as there was quite a bit that I cut out in my recap. There also seems to be a too much filler so I digress. I just wanted to set this up.

Where I want to start is what I said in my opening about what I knew coming in about the kratt. It is wild that I’ve seen November so I was familiar with this story and what this creature is. This movie almost feels like it is using part of that other one as a basis here. We are getting the modern take with a comedic twist. I love the idea of this entity. It is made to do the work instead of the creator. This has an interesting explanation to the myth that is done late. To paraphrase, the kratt does the work. It has no fun and this is what in a capitalist world the owners want. A worker that won’t complain and work. If a worker creates a kratt, then they become what we see the governor is. I like this story and in turn, the movie, being a cautionary tale. I take it as it saying you need a work/life balance. Being too far either way makes you a monster or the enslaver.

With that taken care of, what makes this funny is that Mia and Kevin are the creators of the kratt with the help of Juuli and August. It is spearheaded by Mia though. What is funny is that none of these kids know what hard work is. Grandma tries to show them, but they can’t cut it. They’re too tired or as they say, ‘bored’, after ten minutes. I like the commentary here about youths today not knowing what hard work is. I also think this is a bit of a cliche by the older generation. You find people like this throughout the eras. Heck, even the governor who is in the generation ahead of mine is lazy. There could even be a commentary here on automation and robots taking over to make people this way as well.

The last positive of the story that I want to go into would be the mythology. This creature of the kratt is an interesting one. Creating something like this to do the work for you intrigues me. I mean if you think about it, you are creating a slave. I like that if you don’t give it things to do, it becomes violent. It isn’t an evil being inherently, but you need to buy a soul to bring it to life. In this case, the devil is portrayed as a little person. I thought that was funny, especially when this becomes a battle of good vs. evil when a pastor shows up, played by Jan Uuspõld. I even like that we see a bit of when a kratt was created in the past and even the ending is interesting with this book falling into the wrong hands.

I do want to go over to what didn’t work for me though was that this decided to go comedy. I’ll be honest, I looked up about thirty minutes in to see if this was horror or not. It isn’t listed that way on the Internet Movie Database, but on Letterboxd it is. I do think that it goes far enough. It even does those in a funny way. This would work better for me if it played it straight. Knowing that November is out there, I can also be forgiving since that is the darker take.

Where I want to shift this will be the filmmaking. I think that the cinematography is good. How this is shot looks great. There is even a dream-like or a fantasy feel to what we’re seeing. It almost comes off like this isn’t real life. There is CGI, but I’m fine with it. They’re doing things that fall into that atmosphere as well. I’d even say that the soundtrack was fine. It didn’t standout or hurt to be honest. What I did like was the deeper voice that is used when the kratt is asking for work. They come back to this well multiple times, but I enjoyed it. What didn’t work was the pacing. This goes on for too long in my opinion. I think this could be trimmed to an hour and half to allow it flow better in my opinion.

The last thing would be the acting. I thought that Lill was good as the grandma. She feels like a woman who has lived an industrious life. I also like the change to her as I felt bad. She does well with the change in her performance. Nora and Harri Merivoo are solid as these children that don’t know hard work. They feel real in their portrayal. Tekko and Treima are good as their new friends. I’d say that Mari-Liis Lill, Tammets, Uukkivi and the rest of the cast are good in support. Most of the comedy that worked come from the performances when they aren’t trying. I did want to say that.

In conclusion, this is an interesting foreign film that takes lore and brings to a modern setting with a comedic twist. I like the lore their using. It is interesting. I like the allegories and commentary that is being used here. It is subtle enough to convey it without being in your face. When it is it, they are doing for comedy. I’d say that the acting was fine and fit what they needed. The filmmaking was good for the most part. My only true issue there is that this ran too long and my interest waned. Other than that, I did have a fun time with this movie. Some will question if this is horror, but I think it goes far enough.