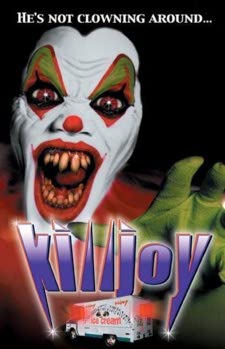 This is a movie that I remember seeing the case when I would go into the video stores in my hometown. I’ll be honest, the case scared me even though looking at the year this came out, I would have been 13. I didn’t take him home, but I heard when I got into podcasts that this movie isn’t very good. It did pop up on a listen of blaxploitation horror films so I decided to check it out. The synopsis is three teens encounter an evil clown.

For this movie, we start with Jada (Vera Yell) talking with her friend Monique (Dee Dee Austin). They’re talking about boys when Michael (Kareem J. Grimes) shows up. He has a crush on Jada and she is nice to him. Monique not so much. They both tell him that he better leave before Jada’s boyfriend shows up. That is when we see him and his name is Lorenzo (William L. Johnson). He is in a gang and with him are T-Bone (Corey Hampton) and Baby Boy (Rani Goulant). They jump Michael for talking to Jada. All the while, a homeless man who is played by Arthur Burghardt, watches on.

That night Michael does a ritual calling forth Killjoy to help him. He wants Lorenzo to die so he can be with Jada. Killjoy is a clown doll that Michael has. Michael is interrupted when he hears Baby Boy calling out to him. He goes down and Baby Boy apologizes for how Lorenzo acted earlier and that he wants to be friends. This is a trap though. It leads a prank that leaves Michael dead.

We shift one year into the future. Jada and Lorenzo have broken up. She is now seeing Jamal (Lee Marks), who is a nicer guy. Lorenzo is now seeing Kahara (Napiera Groves) and he’s still hanging out with his two friends. He leaves to see his girl and his friends hear an ice cream truck. When they go down, it is staffed by a clown who is offering them drugs. They get into the back and are teleported to a warehouse. The clown from the ice cream truck is Killjoy (Ángel Vargas) and he’s out for revenge for everyone that mocked Michael.

That is where I’m going to leave my recap as there isn’t much to this story. I’ll be honest, I wasn’t sure what we were going to get with this movie outside of it being a killer clown movie. During the opening credits, I wasn’t shocked to see Charles Band name attached. It doesn’t look to be a Full Moon movie, but it does have that feel. This would fall into that lesser quality from them that we started to get during this era for sure.

Before I get into any more negatives though, I did want to go over some positives. The first would be the light social commentary we get here. Michael is bullied by these gang members. I did feel bad for him. He is into the occult so he did the only thing he can and try to summon this entity of Killjoy to get his revenge. The movie though is pushing that Michael loves Jada which is part of the reason he is doing what he is. There is a bit of toxic masculinity here with Michael. If she wanted to be with him, she could be. He comes off as that nice guy that expects because he is nice that she will fall for him. We get more toxic masculinity of course from Lorenzo, T-Bone and Baby Boy as well.

The other positive part I wanted to go into would be the ritual and Killjoy. I can’t give too much credit as the movie doesn’t flesh out what ritual he is doing or even if it works. I’m inclined to think that it doesn’t, especially with a scene at the end. I do like the idea of Killjoy though. This movie is a slasher of sorts and our killer tries to have personality with his jokes. A killer clown like we are getting here is creepy for sure. I can work with this. I do wish that movie would have played up more of the clown aspects with him killing people though, so that was a missed opportunity.

That is about where the good things end unfortunately. I’ll take this over to the acting, which is subpar. Vargas does bring personality to the character of Killjoy. I will say that he is a bright spot. Yell, Marks, Austin, Grimes, Hampton, Goulant and Johnson are all lacking emotions. Anger is about the only one that they can convey. I don’t see the fear unfortunately and I don’t connect with them. Part of this could be the writing. The synopsis on the Internet Movie Database calls them ‘youngsters’. I think they supposed to be in high school, but everyone here looks 25. I think having them in college or just out of high school would work better than what we are getting there. The rest of the cast was fine for what the movie needed.

I’ll then take this to the effects, cinematography and the soundtrack. For the former, this is another missed opportunity. I do like the look of Killjoy. That is creepy. He does look a bit generic though. A big issue I had are with the deaths. Many of them are off screen. We get a moment where someone fires a revolver like 25 times. A character is also shot and we don’t see the impacts. This is problematic. We also get some early CGI that doesn’t look good. The cinematography is also lesser quality unfortunately. Other than that, the soundtrack was fine. It doesn’t add a lot or stick out to me.

Now I don’t like to bash movies if I don’t have to, but there are good ideas here that aren’t fleshed out. I think we need more back-story to Killjoy or more from this ritual to work. Adding a bit more to this low runtime would help. What we get though is boring. The acting is wooden and I’d say subpar overall. The effects were weak and the cinematography was fine. Other than that, I don’t remember much from the soundtrack. This movie is frustrating, because I think a bit more care and they could have had something better to work with. As it is, this is a bad movie.