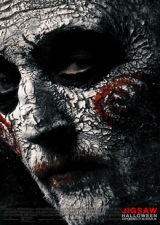 This film begins with a police checkpoint. There is a man who is running through it and gets his tires blown out by a spike strip. The criminal is played by Josiah Black. He runs into a warehouse building and goes up to the roof. He finds a tape recorder. He plays it and he is part of a Jigsaw game, even though John Kramer has been dead for ten years. He is played again in this film by Tobin Bell. Black learns that he needs to hit a trigger to start a game for five people or he will die.

He is held at gunpoint as a detective shows up; he is played by Callum Keith Rennie. His partner with him is played by Clé Bennett. Rennie commands to aim on the remote that is in Black’s hand and to shoot if he pulls it. Black pulls it and they shoot his hand. Someone also hits him in the chest. He is taken to the hospital where they put him in a coma to try to save him.

We then see the game that is being played. There are five people who are in this one. The game tells them that they need to shed blood. There is a woman who puts together how to get this to stop and starts to change the minds of everyone else in the game to cut themselves as well. They have buckets on their head with eye slits and chains around their neck, pulling them to saw blades. The two males in the game follow her lead, but a woman doesn’t. She ends up getting her back cut up. There is another male who doesn’t wake up in time and is killed by the blades.

This then unlocks the helmets. We see that the woman who discovered how to get free is played by Laura Vandervoort. The two men are played by Mandela Van Peebles and Paul Braunstein, the latter being the asshole that is rude to the rest of the group. The other woman is played by Brittany Allen as well. During the first game they’ve played, they were told that they need to repent for their past sins if they want to survive this game. Can they come to terms with what they did and survive the other games or will they fall victim?

Running concurrent to this are the two detectives, Rennie and Bennett, trying to find it if there really is a game going on like Black stated. They start to believe when the body of a man is found hanging from a bridge. There is a bucket on his head and chain around his neck, just like in the game that the others are playing. The pathologist in charge is played by Matt Passmore. His assistant is played by Hannah Emily Anderson. They find a jigsaw cut on the dead man’s face and inside of the wound is a flash drive with information on it. They hear Bell’s voice as well as that there are 4 other victims that will be coming.

Is Bell really dead or is this a copycat? Can the truth be discovered before it is too late?

Now I will give the Saw franchise credit, in that they continue to add films to the series, but keep the story going forward without violating what happened in past films. This film does do that as well, which is impressive the amount of time that has gone on between films. I thought the story of this film was pretty solid even as a stand alone. There were a couple of things that happen that I’m not sure are possible, but it doesn’t ruin the film. There were a couple of twists that I thought were good as well as some red herrings who the killer could be. I’m proud of myself for not falling for them and guessing who the killer was, but I didn’t mind that aspect of the film. The story was well done in my opinion.

The acting in this film was pretty good. I thought Passmore played his role very well. He was quite convincing and his back-story was solid. Bell did great as usual in his role. I liked Rennie as the asshole detective. Anderson looked great and played her role very well. Bennett was solid. I was glad to see Vandervoort and I have to give her a shout-out. I’ve had a crush on her ever since I saw her in V and I thought she did a solid job in this film as well. The rest of those in the game I thought were good too. They showed real terror and pain as they are tested.

Next I should touch on the effects. I do think some of them might have been done practically, but for the most part they are definitely CGI. It looked good despite this and some of it made me cringe. That to me is something I really like when that can be done. I thought the editing of this is well done also. It never really drags at any point and they do a solid job moving between both the ones in the game and the much larger game of finding out the truth of all this. It had a good balance to me. Finally I will touch on the score. I love the Jigsaw theme. This film I believe had a couple of variations on it and I was impressed with that. I love the orchestra sounding music as it has an epic feel for a film that has such an intricate story. It fits perfectly.

Now with that said, is this film best in the series? No, but I do think that it is better than some of the later installments. The story fits with the other ones and now has opened itself to more sequels if they would like to do that. I think the individual story for this one is good. The twists they have are interesting and I liked the ending. The acting was good in the film as well as the effects. I thought the editing of the film helped to build tension and keep you guessing as to what would happen next. The score of the film fits perfectly in as well. I think this film is above average if you the main-stream ‘torture porn’ films. I think the story of this one is much better than most in the genre. I would recommend giving this one a viewing though, especially if you like the series.