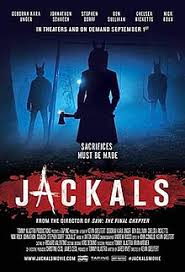 This was a movie I was turned on to a couple years ago when I was trying to do some more independent films for my year end list, but it hadn’t really gotten released as of yet. My sister I believe got the DVD for this one when it was part of a horror pack, so she let me borrow it as it was coming up on my list of films to see. I knew that it wasn’t a big budget, but did some interesting things. The synopsis is set in the 1980s, an estranged family hires a cult deprogrammer to take back their teenage son from a murderous cult, but find themselves under siege when the cultists surround their cabin, demanding the boy back.

We start this off being informed that it is I believe 1983. The opening sequence is reminiscent of Halloween as we’re in a point of view shot as a person walks into the backyard, gets inside of the house and tells the entire family inside. Interesting though, the sister calls the person Eloy before she is killed. This informing us as the viewer that she knew whoever this person is that attacked her.

The film then shifts to a couple of guys in a car. Driving is Justin Powell (Ben Sullivan). With him is another guy and their journey is derailed when they get a flat. They realize though the tire has been slashed somehow. A van pulls up and two men get out. The other guy is knocked out while Justin is taken.

In a cabin we have a group of people. The mother is Kathy Powell (Deborah Kara Unger) along with her son Campbell (Nick Roux) and a young woman Samantha (Chelsea Ricketts). They seem anxious as they’re waiting for someone, but their dynamic isn’t explained until the van we saw earlier arrives. One of the masked men is Andrew Powell (Johnathon Schaech). He is the ex-husband of Kathy and the father of Campbell. The other man is Jimmy Levine (Stephen Dorff). Justin is the son of Kathy and Andrew as well as the father of Samantha’s baby. He disappeared after finding out she was pregnant and joined a cult. Jimmy is a former marine that is there to try to deprogram him.

The problem becomes though, as darkness falls a person in a fox mask arrives. She is Alyssa Julya Smith and she’s sitting on a rock by a swing set. She is chased off, but we see she drew a mark on the rock that is similar to a tattoo on Justin’s arm. They also try to talk to him, but he refuses and is rude. He states that his name isn’t Justin, but it is Thanatos. It gets even worse when the rest of the cult shows up, wanting him back. The family has to decide to fight and try to save him, or to save themselves from this dark group.

Now I came in pretty blind with this movie. I didn’t know what it was about aside from what I saw on the cover. I do know I heard a podcast give a brief review of it, but I didn’t really remember much about what they said, just that they thought it was getting a bad rap and was pretty solid. I actually have to agree that this movie does do some things I really like.

The first thing would be that I’m a sucker for cult films. If there’s anything that I’m bummed about, it would be that I want to know more about them and we really don’t get that. I won’t hold that against the movie as there’s really no way to give us that information. Justin refuses to talk to them and just wants to be free. The other cultists don’t talk so I think this actually works in its favor to build more fear. The more you know, the less scary it tends to make things.

This movie also gives me a vibe of The Strangers mixed with a bit of Assault on Precinct 13. We have this group that are going to make a stand to protect Justin and try to save him, so we have this group of cultist that surround them. To delve more into it though, this family is broken. It makes sense as to why Justin joined them as we learn his parents are divorced and why they are. Justin lashed out by having a child with Samantha and I think he also used drugs. I don’t really get that he’s a teenager from the movie though. He seems a bit older than that. Cults tend to get members like him though that are broken by things around them as they’re more susceptible to manipulation. I really think this works in its favor.

Going along with The Strangers, I do have an issue with the opening of ‘Based on True Events’ or however it worded it. I immediately roll my eyes at this. Since this takes place in the 80’s, they’re trying to play on the fact that there was the fear of cults in 70’s and into the next decade. I don’t think that is needed here though. I also didn’t really get much of the vibe of the 80’s. They try to show it with the vehicles and some of the televisions in the cabin. The movie feels timeless so I think that’s actually a benefit for it holding up.

Shifting this over to the pacing, I think that was really good. The movie has a runtime of 85 minutes and I think that’s perfect. The cold open I do feel is out of place though as it really doesn’t correlate back, aside from the fact that it seems a member murdered his family. That doesn’t fit with the rest of the movie though as that is not way this family is being attacked. It is more that Justin was taken. Once we get to the cabin and the family being trapped though, I think it is good from there. Things happen at a good clip and the ending works for me. There is a troupe at the very end, but it had my anxiety going with what the implications are.

Taking this to the acting, I was really surprised by the cast to be honest. We have a blend of people I haven’t heard of with some solid actors. Unger is really good here. She does so well at playing this subdued character that is broken. She is divorced and she just wants her sons back. She has turned to alcohol as a coping mechanism. Sullivan is interesting as well. He’s entranced into this cult when we see him to the point where I questioned if he does know these people or not. He doesn’t really have much as he’s tied up pretty much the whole movie. It is just interesting that he’s the crux of the events. Ricketts I thought was fine and adds an interesting dynamic with her being there with her baby. Roux is a jerk, but I feel that he feels slighted by all of this. Schaech is solid as the father. We like him at first, but there’s some information from the past that makes him flawed. I liked seeing Dorff here in this role, even though he’s really a secondary character. The rest of the cast rounded this out well with a shout-out to Smith with what she’s wearing and the imposing size of Jason Scott Jenkins as the Lead Cultist.

The effects for this movie are really good as well for its budget. We don’t get a lot of them if I’m honest, but I don’t think we need that. The blood in the movie looks good. We get a scene where we see someone stabbed multiple times and there’s also a scene where someone is tortured with fire. Something I loved about this movie is the look of the cultist. The use of the animal masks is so creepy and it really made me feel uneasy for sure. The cinematography I thought was done well for what was needed.

Now with that said, I thought this was a pretty solid effort if I’m going to be honest. It does some things that I like with having this cult and the siege narrative. There are some bad decisions made, but I think a lot of this is a normal family with money so they’ve never really had to face decisions like the ones here. The acting is pretty solid across the board and the pacing is well done. If I have a gripe there would be to correlate the cold opening back into the rest of the movie somehow. The effects were good as was the cinematography and I thought the soundtrack fit for what was needed. It doesn’t necessarily stand out though. I would rate this movie as above average for sure. Not a great movie, but a solid effort for sure.