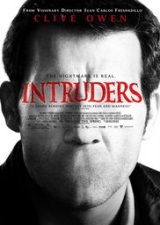 This film begins with a little kid, played by Izán Corchero, telling a scary story he wrote to his mother, she is played by Pilar López de Ayala. He doesn’t have an ending yet and he wants to finish it tonight. She tells him that she is tired and it is late. She goes to close his window, but he tells her not to in case his cat wants back in.

He goes out to find his cat soon after. When he does he sees a dark figure enter through his window. When he goes inside, he finds his mother being attacked by it. He can’t see its face. He saves her and then flees, with the thing chasing. Together with his mother they defeat whatever this entity is.

We then meet another family, with the father being Clive Owen, the mother is Carice van Houten and their daughter is played by Ella Purnell. Owen works as a welder who has a job high on a skyscraper that is being built. He misses lunch at his parents. During this, Purnell chases after a cat and discovers a hole in a tree. She checks inside and finds a box with a story inside of it.

It is the story of Hollowface, the same monster that was after Corchero. She rewrites it and tells it to her class. The problem with it though is that she is haunted by this faceless creature. It comes to take her face so it can be loved.

The film shifts back and forth between both families as they are both haunted. Both kids’ parents will do whatever it takes to save their child though. Is there really a monster though? Or is it a mental disorder that someone doesn’t know about?

First off, this film had a really concept in the beginning and had me intrigued. The problem with the film though is that it was boring. It starts off really good and then slows way down. There is some much of not knowing what is going on or what to do that it really drags on and it is boring.

I think this film could have been a lot better. The final product of this one was definitely a disappointment. I am fine with ghost-like films that aren’t overly exciting, if the story is good enough. This one’s story is kind of confusing. What I did like was the twist that explains everything, but at the time of the film to me it was just a little bit too little too late, it drug on. Cutting some stuff might have helped. I would only watch this to decide for yourself if you liked it or not. Not the worst, but could have been better in my opinion.