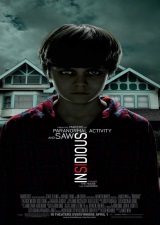 This was a movie that I’m not going to lie, terrified me the first time that I saw it. I was fresh out of college, saw this with a couple friends from high school and was living with my grandma at that time. This legit made me feel uneasy to the point where I was turning on lights before entering hallways and rooms. I watched this only for the second time with my girlfriend and was curious how this would hold up. The synopsis is a family looks to prevent evil spirits from trapping their comatose child in a realm called The Further.

We begin with a family moving into a new house. The father is Josh Lambert (Patrick Wilson) who is a school teacher. His wife is unemployed at the moment Renai (Rose Byrne). She is a composer and is currently home with their baby daughter and while also working on composing music to sell. They also have two sons, Dalton (Ty Simpkins) and Foster (Andrew Astor).

She begins to notice funny things going on in the house. One morning she places some of her books on a shelf and later on that day, they’re knocked all over the floor. It gets really creepy when she is working at her piano and hears someone talking in her baby’s room over the monitor. Upon investigating, she finds nothing. Days later, Dalton falls into an odd coma. The doctors do not know why it has happened or what to do for him. They finally bring him home and take care of him there.

Spooky things happen like doors opening on their own, strange noises and seeing ghosts. It continues to the point where bloody prints from a hand that doesn’t look quite human are found on Dalton’s sheet. Josh isn’t able to concentrate at home and he stays even later at schools quite a bit to the point he’s noding off and this causes a strain on their relationship. Renai finally gets freaked to the point that forces the family to move again.

It doesn’t take long for the haunting to continue in the new home and Josh’s mother Lorraine (Barbara Hershey) isn’t all that surprised by it. She brings in a friend, Elise Rainier (Lin Shaye), who is a psychic to help. It turns out that she knows Josh, even though he doesn’t remember her. Helping Elise are two men, Specs (Leigh Whannell) and Tucker (Angus Sampson). They bring in equipment to help document what they’re doing. A secret from the past comes up and Josh has to do something he hasn’t in a long time to save his son.

Now I have to say that after this second viewing, I have even more of an appreciation for this movie. I can see how this has sparked three sequels/prequels now as there’s a lot of story that is introduced here that could be fleshed out later. It doesn’t take us long to get into the creepiness of what is going on here.

The first thing I want to delve into is the technology they use. Renai hears creepy voices over the baby monitor and this is one of the first films I saw do this to the point where these things creep me out. Going along with this, Tucker has created different things that they use in the film to detect energy from ghosts and this makes for some parts that get under my skin for sure. I think this really helps to build the tension in a way that feels believable.

This film also does something that many haunted house films don’t do. The family flees the house that they’re experiencing this in and it follows them there. What makes this good is that there’s the troupe of people staying in the house despite what is happening and some movies give good reasons why they can’t. I like seeing here to explore that, but it doesn’t make things better.

The writing here is just good overall. Whannell aside from his role in the movie also wrote this screenplay. I think that he builds some good mythology here to the afterlife and I like those little things are introduced early on that play out later. I should shift to the pacing while covering this since I’ve already said it doesn’t waste time. What also works is that we don’t go too long in-between scares. The non-scares parts allow us to piece together what his happening while keeping the intensity going. The tension ramps up toward the climax which used to bother me, but after this viewing I really didn’t have issues with something that happens. I also like that it does set itself for a sequel, but not really in a cheap way.

For the acting here, I think that it’s really good across the board. Wilson is a bit of a jerk in that because he’s stress about his home life, he’s staying over at work. He does want the best for his family, but it is breaking him down where Renai is facing it head on. I like that he’s the one that’s skeptical about all of this while having a past he doesn’t remember. Byrne is great and I feel horrible for her. While Josh is avoiding what is happening, she’s taking it head on and willing to do whatever to stay Dalton. Simpkins was fine, but he’s asleep for a good portion of this. Shaye is great and I love that she’s become kind of the heroine of this series. Whannell and Sampson play off each other well. I thought Hershey and the rest of the cast did fine in rounding this out as well.

The effects are something I’ve been waiting to talk about. They don’t really seem to go CGI heavy for the most part. I know the ghosts seem to be done practically and if they used CGI, they hid it well. There are some really creepy things of people in certain places in rooms where characters don’t always notice them that gets under my skin. There’s also the Lipstick-Face Demon (Joseph Bishara). I know he was done with CGI at times, but not going to lie, he still makes me feel uncomfortable. Some of the things the ghosts do as well make me feel that way. The cinematography is also very good as well.

The last thing to cover would be the soundtrack, which I think is amazing. They use a lot of string instruments which really help to make some of these scenes even creepier if I’m going to be honest. It helps to raise the tension. On top of that, they use Tiny Tim’s ‘Tiptoeing through the Tulips’ effectively. I’m not sure if this is a song that everyone found creepy, but being it this movie it has ruined forever in a great way for me.

Now with that said, this is a really good movie and one of the best haunted films ever for me. I even have friends who don’t like the genre who like this movie. It doesn’t waste any time getting into this, but it also is effective in its scares. It does a lot of things that I find to be unnerving if I’m honest. I think that the acting really helps as seeing this family fall apart in not knowing what is happening to their son. The effects for the most part are really good, but there’s one moment of bad CGI with the Lipstick-Face Demon. It isn’t nearly as bad I thought it was from memory. The soundtrack is great and definitely adds to the feel of this movie. Overall I think this is an amazing film and I’ve come up on my rating. I’d recommend this to horror and non-horror fans alike.