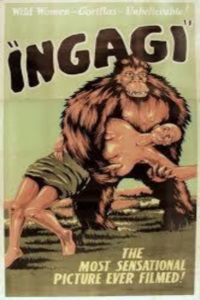 This was a film that I was introduced to via the documentary Horror Noire: A History of Black Horror. It goes into a bit about how racist this film is and that there was a sequel made 10 years later called Son of Ingagi. Now my intention is to watch the sequel and doing a bit of research I figured out that on YouTube, I could get a jist of this movie as it is considered lost technically. I will get into that in a minute, but the synopsis is an expedition enters an area of the Congo jungle to investigate reports of a worshipping tribe.

To get into what I was stating, this movie was passed off as being a legitimate trek into the African jungle. That isn’t the case. They actually illegally took footage from a silent film and then dubbed it over as this is an early sound film. From there, they did film some of their own things at the Los Angeles Zoo. What I watched on YouTube did seem to find a several of the Vitaphone records and play that over what some of the opening titles cards would be as well as actual photos from African safaris. This movie was shut down by the New York Better Business Bureau as they learned the gorilla footage was faked. Charles Gemora, one of the stars, was the gorilla and played in around 10 movies before this and continued to do so in the 1950’s.

What I’m gauging this movie off of what I heard. I don’t mind the idea of making a safari film. It doesn’t even bother me that the footage was stolen as well as faked. When I go into a movie, I’m going into it for art so I can overlook that. To excuse the animal references, there’s a major elephant in the room for this movie.

The major issue is that this movie is extremely racist. The posters that are shown from it are touting that it has found the missing link between gorillas and man. It is stating that it finds a tribe deep in the Congo jungle where the women are willingly going off with gorillas and mating with them. I can forgive only a bit that it was the 1930’s, but to be honest we haven’t come that far here. The posters I see are appalling as they aren’t that much different from advertisements that are used throughout the years as the gorilla looks oddly human.

Some other bits I’ll include here are that a tribe of ‘pygmies’ used are actually black children aging from five to ten years old and in make-up from the LA area. I will give credit for using them at least. Some of the native women were actually white actresses in blackface. The doubts of the authenticity of it as a documentary were when some of the black actresses were recognized as well. The last trivia will be that ‘ingagi’ is supposedly an African word for gorilla, which does not appear in any language from the continent.

So as I’ve said earlier, I can’t fully judge this as a full movie. All I can do is state the bit of research I’ve done and the aspects I could hear from the recordings. It is sad that something was made like. The aspects of the safari are fine, even though it does seem like they killed an elephant and lion. The narration does talk down about the natives there. If there is where it ended, I could give it a bit higher score. The racism that is used at the end of it though is saddening. It is really coming down to the aspects of the concept and story I do like, which isn’t much as well as the score being okay. It is annoying and repetitive, but I can’t confirm it was what was supposed to go with it. From what I’ve heard and seen here, it is one of my lower rated items.