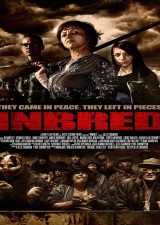 This film begins with a man and a woman. It looks like it is olden times and he offers the woman lemonade. She keeps looking at the man splitting wood behind the guy she is with. The man brings his axe over and asks if he can have some lemonade. When he is scolded, the man with the axe kills both the man and woman.

It turns out that someone is watching a movie on a phone. There is a group of juvenile delinquents. The one with the phone is the most outspoken; he is played by Chris Waller. His side-kick is played by Neil Leiper. Sitting behind them is an arsonist played by James Burrows. Sitting next to Waller and Leiper is a quiet girl who likes to draw, played by Nadine Rose Mulkerrin. Driving this bus is a woman played by Jo Hartley and next to her is James Doherty.

Everyone with them has gotten into some kind of trouble and has to do community service. In order to fulfill this they have to come out into the country, help fix up a house to stay in and then do whatever tasks Hartley and Doherty assign them.

The GPS they have does not work because they are out of range. They have a map though. They pass a pub called ‘The Dirty Hole’. After passing through a small town, Mulkerrin and Burrows see a group of kids attacking a scarecrow, but it looks like the scarecrow is bleeding.

After they fix up the place they are going to be staying at, they go back to the pub. When they step inside, everyone gets really quiet. The man who owns and runs it is played by Seamus O’Neill. He tries to make them feel comfortable, giving them a table. When Doherty asks if they have any food, he says they do not, but offers them some weird, crunchy things that are gross according to Waller. When Hartley asks for cokes, he does not serve that either, but he does have lemonade, which is also disgusting.

Mulkerrin goes out for a smoke and she is bothered by a weird guy, played by Terry Haywood. He follows her into the pub and O’Neill runs him out. He apologizes saying he means no harm.

The next day, the group goes to an abandoned train yard. On the way there, Burrows looks up and sees someone on a cliff looking at them. When he looks away and back up, there is another. We look again and there is a third.

At the train yard, they open up a shed and take tools out of it. There is another argument between Hartley and Doherty. Hartley tries to befriend the kids and wants them to have fun to make everything go smoother. Doherty tries to be tough with them and wants to tell them what to do. They try to fight back when he does that, but he does try to take some of her advice. She tells them they probably should not take these tools, because they are not theirs. He tells her that he told someone to be here, but they are not there and there is no one around, so it should not be a big deal.

They break into groups which are Doherty, Waller and Leiper while the other group is Hartley, Burrows and Mukerrin. They are trying to salvage metal and they have a bet to see which group can find more. Doherty’s group does not work together. Waller and Leiper go inside a train and just vandalize. Doherty looks at a book trying to figure out where to look for metal outside of the train car. Burrows and Mukerrin take tools and actually do what they are told while Hartley waits outside.

Burrows and Mukerrin see a fire burning and investigate. They find an animal being burned alive and it looks like someone is watching for entertainment. They let go of another that is tied up and it gets hit by a truck. Hartley hears a noise and goes into another train car. She finds adult magazines where someone has put animal heads on bodies.

Burrows, Mukerrin and Hartley are chased into a brick building by the weird guy from the pub. Haywood and his two friends hold them while they are getting ready to hurt them. The other group shows up. We learn that the tools are Haywood’s and they are given back. They yell at each other and Doherty chases after. He trips, falls and cuts his leg.

They take him to the pub and O’Neill tells them he will help. He ends up killing him and cutting his head off. They are locked in the basement and we learn that these sick individuals put on shows for all those in the town, where they kill them in different ways for entertainment. O’Neill is the ringleader and puts on black and white face paint for it. They really do put on a show.

Will they be able to get away before they are killed for fun? Can they find help before it is too late?

This film has a really good concept and a scary one at that. I like the fact that the whole town is pretty much inbred and they are all in on it, but they do well at making you think they are not. The idea of the shows they put on is terrifying and disgusting, which makes it even better. You cannot help, but to keep watching.

What I did not like was that it took a little bit to get going. I do not like that they used some CGI effects, because I think they look faker than rubber. Some of the deaths are elaborate, which I did like, but some of them were not all that plausible. These things really held it back for me and kind of made it disappointing.

I would recommend this if you are into this concept. You have the clash of city folk with simple country people. They do not travel far so they are feeling the effects of constant inbreeding. The idea is really good with the town putting on torture shows and killing outsiders. The unrealistic aspects ruin it for me and taking a little too long to get going was an issue. I do have to say I like the ending, because it is not one that we always see which is good as well. If you can stomach it and are into these types of film, give it a view. I would avoid this if not.