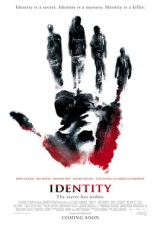 This is film an interesting film for me. For whatever reason, I didn’t see this until an ex, who had it on DVD, said we needed to watch it. She had a John Cusack fetish, so that was probably why. My second viewing is with my girlfriend Jaime, who loves this movie as well and it also was one I needed to revisit for The Podcast Under the Stairs’ Summer Challenge Series for the 2000s. The synopsis here is stranded at a desolate Nevada motel during a nasty rain storm, ten strangers become acquainted with each other when they realize that they’re being killed off one by one.

We start by listening to tapes from an interview. We eventually see that it is Dr. Malick (Alfred Molina) that is listening to them. He is a psychiatrist from what I’m gathering. He is assigned to a patient that is due up for execution, but some information from the interviews and a journal reveals new evidence. The district attorney, Marshall Bell, is woke up and he’s irate at his assistant DA, Matt Letscher, for letting this happen without him knowing. The prisoner is being transported to the secret hearing and he had no idea until now. It really isn’t the assistant DA’s fault though, this is all happening fast as the execution is tomorrow. So an emergency hearing is called.

We then cut to the desert. There is a couple with a child traveling. The stepfather is George York (John C. McGinley). Along with him is his wife Alice (Leila Kenzle) and her son Timmy (Bret Loehr). George has an OCD-like issue and Alice or her son doesn’t really talk much. They get a flat tire and they pull over to fix it, which he’s surprised to see a high-heel shoe caused it. We then get to see it belongs to an escort of Paris (Amanda Peet).

Also out here in the desert is Ed (Cusack). He’s driving for an aging actress of Caroline Suzanne (Rebecca De Mornay). She isn’t very nice. When her phone dies, she asks Ed to check the bag next to him for a battery. It is raining badly out so he isn’t paying attention when he hits someone. It ends up being Alice. He is trying to find a hospital, but the path is blocked by water. Also all the phones they find don’t work which is thanks to Paris. She backed her car into a pole trying to avoid a flooded road on the other side.

These people converge on a motel that is run by Larry (John Hawkes). Also coming there is a newlywed couple of Ginny (Clea DuVall) and Lou (William Lee Scott). They’re not getting off to a good start as they’re doing a lot of fighting. Also coming to this place is a police officer named Rhodes (Ray Liotta). He’s transporting a prisoner, Robert Maine (Jake Busey). Not everyone is who they seem though and when these people start to be murdered one by one, they have to get to the bottom of this before it is too late.

Running concurrently is the meeting in the conference room. The judge who already heard the case is Taylor (Holmes Osborne). The prisoner’s defense attorney is Carmen Argenziano and he thinks that along with what Dr. Malick has to say, they cannot execute his client. The question becomes, how are these two stories connected?

I have to say that coming the first time I came into watching this film, I had just had a vague idea of what it was about and didn’t know what was going on for most of it. When I say that, I mean it as a good thing since it was not predictable and it had me guessing until the end. There are a lot of details that I left out of the review, because it would begin to give away what happens in this film and I feel I cleaned it up even more with this update. This is definitely a movie that is good even with a second viewing. I will admit, I didn’t remember how it played out, just the basic premise.

How this is constructed is something that really works for me. With that first viewing, it is pretty much how I left my recap of trying to figure out how they’re connected. We know that there’s a criminal that is being escorted to the hearing so it seems to connect with what we’re seeing. It goes beyond that though. Everyone we meet has something to hide. Ed used to be a cop and notices things that Rhodes is doing don’t necessarily fit for someone in the profession. He could just be sloppy though. Paris has a bunch of money. Larry is nervous about people going to certain room. It is just things like this that as you learn more; you see how the pieces fit together.

The setting is also really good as well. You have a motel, in the middle of the desert and it is a horrible rain storm. The movie gives you clues to the truth, even from the beginning. It is some what of an adaptation of Agatha Christie’s ‘Ten Little Indians’ and plays like a neo-giallo film to be honest. I say this as we get red herrings and the characters are picked off until we get to the truth.

This is aided by how strong of a cast we have here. I know many people don’t really care for Cusack, but I think he’s good in this movie. Liotta is solid as well and what really works for him is just his outburst. Peet is quite attractive. She also works well in this movie as I’d say she is the third lead. Hawkes, DuVall, Molina, McGinley, Scott, Busey, Pruitt Taylor Vince, De Mornay and the rest are just solid as well. There isn’t a bad performance in this movie if I’m honest.

Aside from that, it would really just be the effects to cover. We don’t get to see much, but there are a couple scenes where people are hit by moving vehicles. I thought they looked good. We get to see the after effects of deaths that do as well. The rain also looks quite real if I’m honest which adds a lot to the claustrophobic feel since they can’t get out. There is something I’ll hint at here, there are some unbelievable things. Disbelief needs to be suspended a bit as we have nightmare logic. To finish this thought up, the cinematography was well done also.

Now that’s all I really wanted to go over with this movie. I think it is one that holds up after multiple viewings. It is an interesting neo-giallo/Ten Little Indians type film. Where this movie ends up though is great. I love the concept and the acting is strong to get us there where I don’t really think we get a bad performance. The setting and the circumstances that keep them there is included here as well. No issues with the effects or how this was shot and the soundtrack fit for what was needed. I’d say this is really good movie and would recommend giving this a viewing to horror and non-horror fans alike for sure.